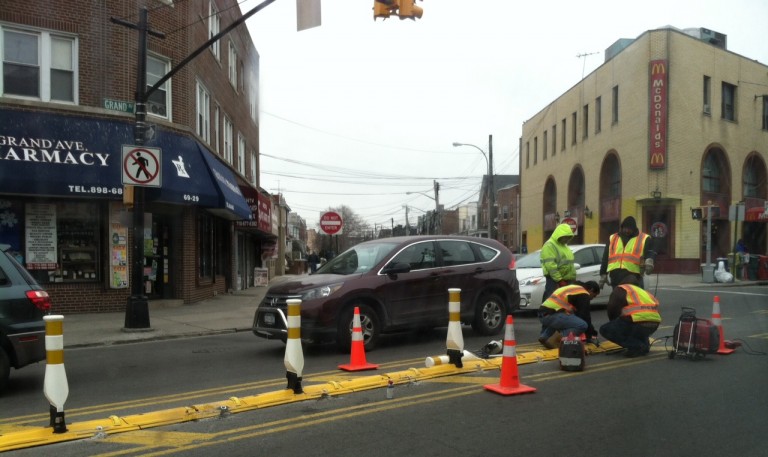 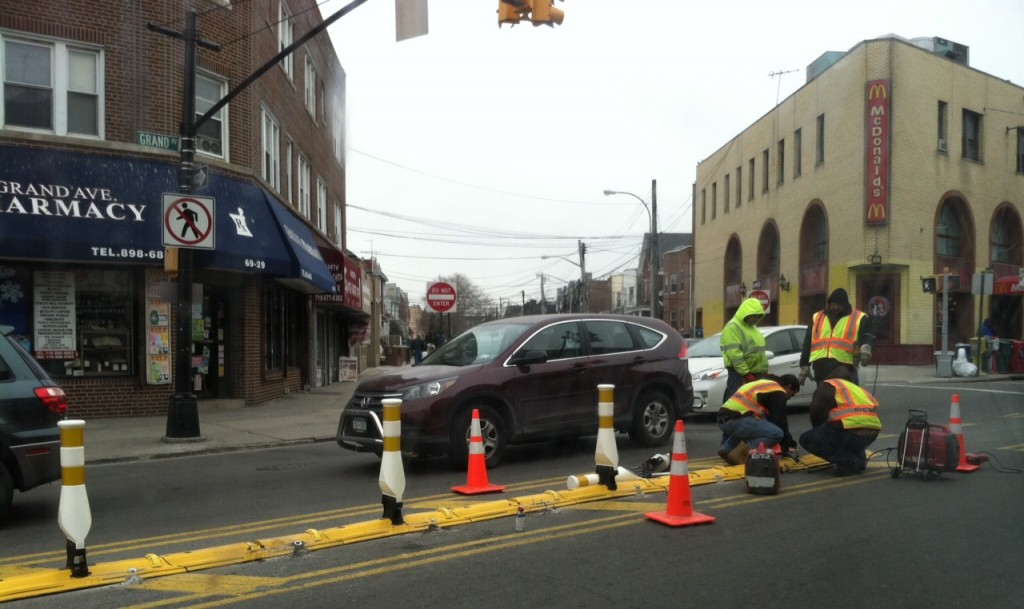 The city Department of Transportation made changes this week at a Maspeth intersection that residents have long lambasted as dangerous – and where a 68-year-old woman was killed earlier this year. Photo courtesy Dmytro Fedkowskyj

Outcry over an elderly woman’s death at a busy Maspeth intersection helped spur the city Transportation Department to make some changes along Grand Avenue this week.

A spokesman for the DOT said the city was installing what it labeled as “qwik kurb” along Grand Avenue near 69th Place to deter the already prohibited left turn at the intersection after an unlicensed driver killed 68-year-old Angela Hurtado earlier this year doing just that. Maspeth residents said the safety measure was long overdue and an overall good start to protecting pedestrians.

“We need to have more traffic enhancement,” said Joann Berger, the Parent Teacher Association president from the nearby IS 73. “We have so many double-parked cars and it is difficult to maneuver around, making safety a big problem.”

Berger said there have already been far too many incidents involving students and reckless drivers along Grand Avenue and the city needed to act more aggressively to combat that. Come dismissal time at IS 73, she said it was commonplace to find the school’s principal and other faculty members standing in the middle of the busy streets surrounding Grand Avenue to ensure students can get home safe.

“We need more attention drawn to this area,” she said. “We also have PS 58 not far from us and they too have a huge problem with parents double parking outside the school. We are talking about close to 4,000 students we want to keep out of harm’s way.”

Community leaders and elected officials, including state Assemblywoman Margaret Markey (D-Maspeth) have long been calling on the city to send resources to Maspeth for the betterment of pedestrian safety. A spokesman for the DOT said their calls have been heeded and change was coming.

“The DOT met with Assembly member Markey recently and discussed additional pedestrian safety enhancements at Grand Avenue and 69th Place,” the DOT spokesman said. “We will also continue to review this location and others nearby for additional potential improvements.”

Markey has been pushing for legislation she introduced along with state Sen. Mike Gianaris (D-Astoria) that would increase penalties on unlicensed drivers who cause injury or death when behind the wheel.

Community advocate Dmytro Fedkowskyj stood at the corner of Grand Avenue and 69th Place last month alongside Berger and other Maspeth residents to draw more attention to the intersection. He was one of the first to take note of the city’s most recent pedestrian safety upgrades where Hurtado was killed, but also said there was still plenty of room for improvement.

“It’s great to see physical changes take place at this intersection. It’s an approach that will help safeguard pedestrian traffic,” he said. “But more of these types of changes need to be implemented at other dangerous intersections throughout our community. We need more traffic studies conducted at other area and when a change is finally made, it should be evaluated over time to ensure it’s effective.”

Philip Hickey said another problematic spot fell near where the eastbound Long Island Expressway hit 69th Place, where a car hit his own mother years ago.

“A lot more needs to be done,” he said. “It’s dangerous, what is going on here. We need help out here – especially for all the children in the area. What they did is a great start, though.”