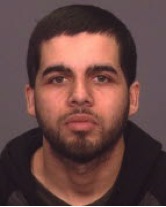 Bryant Aguilar was arrested earlier this week in connection to a string of robberies that have recently occurred throughout Ridgewood, police said. Photo courtesy NYPD

The 104th Precinct put an end to a Brooklyn man’s alleged string of robberies throughout Ridgewood and also announced a series of graffiti-related arrests, authorities said.

Bryant Aguilar, 21, was arrested Monday in connection with four robberies throughout the month of February and was charged with four counts of robbery, a precinct spokesman said.

The arrest came after 104th officers reported that several women had been targeted in a string of knifepoint robberies throughout Ridgewood. In each instance, police said several men would follow their female victims as they walked down the street before showing their weapons, which resembled kitchen knives, and stealing from them.

104th Precinct Captain Christopher Manson said Aguilar, a resident of Bushwick, was arrested in an attempt to shoplift from a grocery store in Brooklyn on Feb. 25. That was when police discovered he had six previous arrests to his name for offenses like trespassing and theft, cops said.

But Aguilar’s arrest only brought about a short-lived celebration for the Queens cops, who said there were still other suspects on the loose.

“Please note that although we have made an arrest and closed out four of the robberies, we are still investigating a two-man knifepoint team in the same area,” a 104th Precinct spokesman said. “Please remain diligent.”

The precinct posted a flyer on Wednesday asking the community for help regarding another string of burglaries in the Maspeth and Woodside area. Cops said the vandals were striking when people were at work or away from their homes and anyone with information was asked to call the 104th Precinct Detective Squad at (718) 386-2723.

Earlier this month, police also reported three men suspected of robbing a livery cab service on 48th Avenue near the Maspeth-Woodside border. According to the NYPD, the three men showed firearms inside the shop around 5:40 p.m. on Feb. 25 and demanded money and property from its five employees.

The trio got away with about $16,000 and the employees’ cellphones, police said. Cops described the three as slim and possibly in their early 20s.

A 104th Precinct spokesman also announced two other arrests in connection to various acts of graffiti throughout Maspeth, Middle Village and Ridgewood. Manson said officers have been diligent in responding to graffiti complaints and the two latest arrests were a testament to their hard work.

Cops collared 20-year-old David Negron of Middle Village on March 8 and charged him with 21 individual acts of graffiti, police said. A spokesman for the precinct said he had tags throughout the community.

“Negron vandalized everything from the storefronts of local businesses, ATMs, mailboxes, doors, walls, emergency call boxes and payphones,” the spokesman said. “This damage was done mostly in the Maspeth and Ridgewood areas of the precinct.”

His tag was withheld so as not to give publicity to his graffiti, cops said.

Police also announced the arrest of 43-year-old Joseph Guilfoyle of Ridgewood on March 11, who was charged with eight individual complaints of graffiti in multiple precincts, cops said.

Anyone with more information on related crimes was asked to contact the NYPD’s Crimestoppers hotline by calling 1-800-577-TIPS (8477), visiting online or texting 274637 (CRIMES) and entering TIP577.