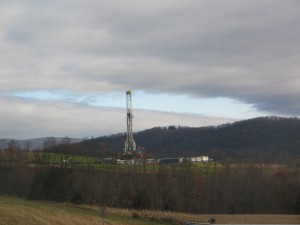 Last week, state Sen. Tony Avella (D-Bayside) joined with the environmental advocacy group Environment New York and others as the group released its latest report in its campaign to stop hydraulic fracturing – a method of extracting natural gas that is often known as hydrofracking – in the state.

The booklet documents people’s first-hand experiences of illness, water contamination, and damage to livelihoods due to drilling operations that are inherent in fracking operations.  The collection includes stories spotlighting negative health impacts, losses of property and livestock, as well as agricultural ruin.

“Shalefield stories highlights the stories of victims of fracking, who live right next to us, in Pennsylvania,” said Heather Leibowitz, director of Environment New York, in a statement.

“From stories of Judy Armstrong Stiles who found arsenic and barium in her water after signing the lease to allow fracking, and who later found it in her blood stream, to stories from June Chappel from Washington County who can tell you exactly what it’s like to live just 200 feet from a 15 million gallon waste fracking pit, these stories come at a critical time and we have the responsibility to listen to their words of wisdom,”Leibowitz added.

Hydrofracking is the process by which natural gas is extracted an entails injecting water laced with chemicals into the ground at high pressure to break rock. A 2010 report by then-Manhattan Borough President and now city Comptroller Scott Stringer stated that seven states in the country have reported “serious incidents” of water contamination and explosions near sites where companies have used hydrofracking.

A 2008 report from the U.S. Land Management Bureau said groundwater in Sublette County, Wyo., which has one of the country’s largest natural gas fields and where hydrofracking was commonly employed, was contaminated with benzene, a substance that has been linked to cancer and nervous system disorders.

“When you hear from people about their own personal horror stories of the damages they have incurred to their homes and water supply as the result of hydrofracking, it stops you dead in your tracks and makes you wonder why this dangerous practice is even under consideration,” Avella said.

Gov. Cuomo has continued to delay his decision on fracking in New York state, awaiting the results of a health review by State Commissioner of Health Dr. Nirav Shah on the impact of fracking to the environment and consequently to public health.

From the “Shalefield Stories” booklet, Pramilla Malick, a resident of Minisink, New York, a town known for organic farming, shared her story of a pipeline company wanting to build a huge gas compressor station in the center of her rural-residential community.

“My neighbors are now besieged by noxious odors, severe air pollution, and deafening noise from frequent blowdown events,” Malick said.  “We are all experiencing many symptoms that we have never had, prior to the facility being built.

Malick said that instead of studying fracking properly, to ensure its’ safety, state agencies were “handing out permits like candy on Halloween.”

Avella added that hydrofracking has been a “disaster” in Pennsylvania and it’s important to share Shalefield stories in New York.

He’s also hoping that this, along with other, mounting evidence, is enough for the governor to ban Hydrofracking in the State for good.

Assemblyman Phil Goldfeder, whose district includes Broad Channel and Rockaway, said he’s wary of hydrofracking in the state, but still would like more information.

“I don’t know enough about fracking, especially as it pertains to our drinking water,” Goldfeder said.

He added that until he knows the full story on the environmental and health effects of fracking, he will remain opposed.

“The state is taking the correct approach and putting off their decision until we have all the facts.”

Dan Mundy, Jr., president of the Broad Channel Civic Association and a member of Jamaica Bay Ecowatchers, was in lockstep with Goldfeder on the issue.

“I think the governor and the state Department of Environmental Conservation (DEC) is taking the right approach since it appears that fracking wasn’t regulated enough in Pennsylvania, with all those horror stories,” Mundy Jr. said.

He added that he could foresee the potential for an “environmental disaster,” if fracking isn’t done properly.

“I’d rather us not do it at all, if fracking could turn into a health hazard.”

The Citizen’s Campaign for the Environment (CCE), another environmental advocacy group based in New York, is also concerned about hydrofracking.

A statement on the group’s website explains that, “CCE is still gravely concerned at the prospect of large scale industrial drilling in New York State. New York is not prepared nor staffed to implement this drilling program and be able to uphold the DEC mandate of protecting public health, and our water and land resources.

Among the group’s list of concerns about Hydrofracking are radioactivity, hazardous chemicals injected into the ground, air pollution from diesel engines and compressor stations, as well as brine that is five times saltier than seawater and can damage freshwater streams and lakes, as well as corrode infrastructure.