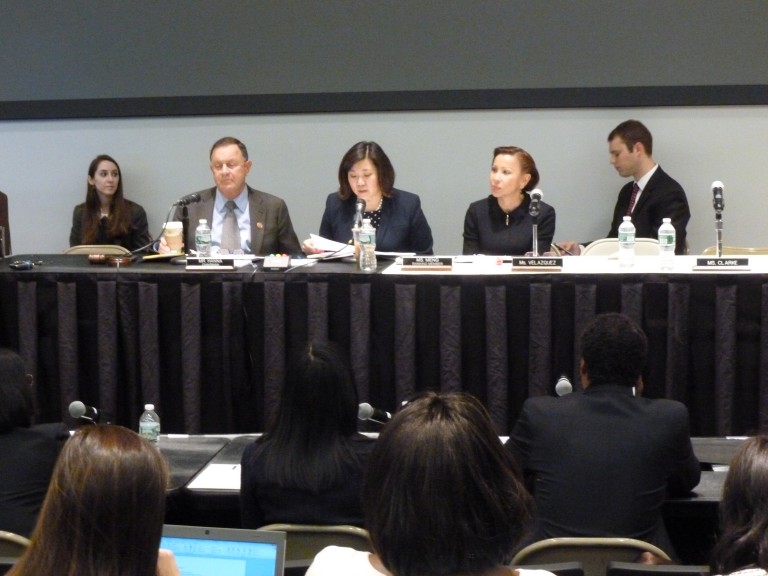 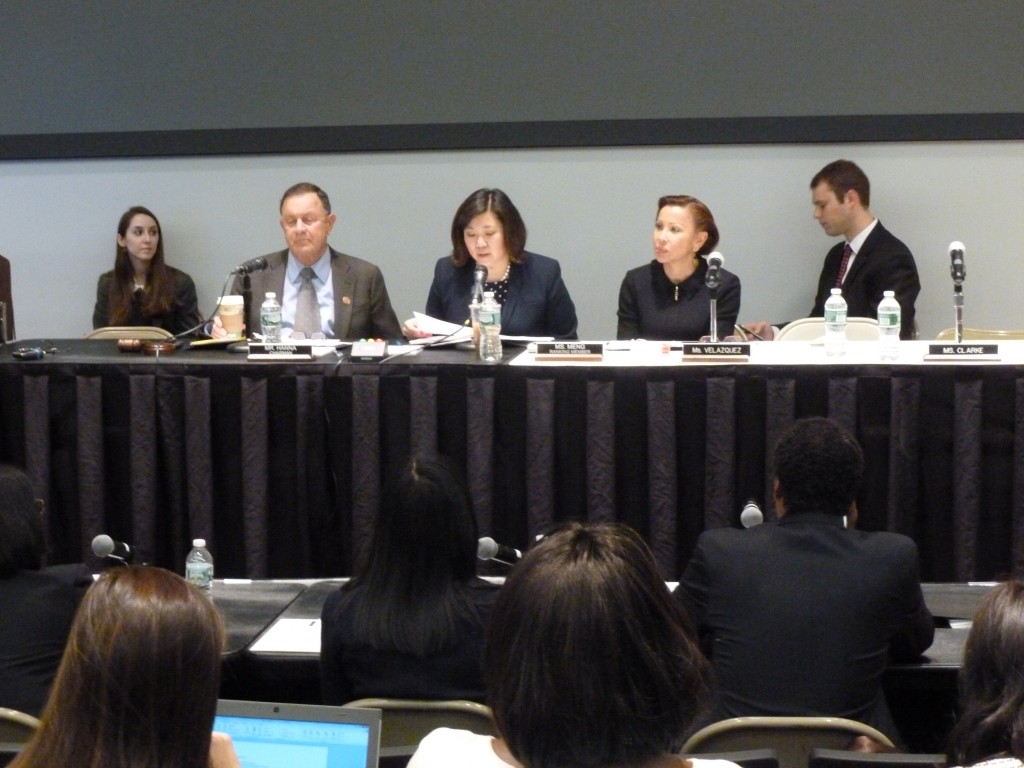 When it comes to bridging the gap between federal assistance and Queens’ small business owners, U.S. Rep. Grace Meng (D-Queens) said there was no better way than bringing the debate to her home borough.

The freshman member of Congress, who also serves as a ranking member of the House Small Business Subcommittee on Contracting and Workforce, sat in on a field hearing at Queens College looking into why borough business owners were not taking advantage of their accessible federal benefits. She sat beside U.S. Reps. Nydia Velazquez (D-Queens, Brooklyn), Yvette Clarke (D-Brooklyn) and Richard Hanna (R-Utica) before a panel of witnesses, including the Small Business Association and other city economic stakeholders.

“I’ve heard from business owners in Queens and business organizations that there is insufficient outreach from the federal government,” Meng said in her opening statement, “These programs, including loans, government contracts, the Export-Import bank and guidance through Small Business Development Centers and mentor-protégé programs prove to be successful once they are accessed.”

Meng said the Small Business Association and Department of Commerce needed to do more to engage minority small business owners for the sake of the greater economy. In New York alone, the congresswoman said minorities owned 607,000 businesses and women owned 595,000 enterprises. Immigrants also make up almost half of all businesses throughout New York City, she said.

Michele Chang, acting chief of staff for the Small Business Administration in Washington, fielded questions and heard testimonies to potentially better the agency’s ability to be effective.

In her prepared statement, Chang said SBA-guaranteed loans were three to five times more likely than conventional loans to go to minority and women-owned businesses. She also said the group has taken steps in establishing a nationwide network of Small Business Development Centers to provide entrepreneurs with long-term counseling.

Bill Imada, chairman and CEO of the California-based IW Group, testified on behalf of the Asian/Pacific Islander American Chamber of Commerce and Entrepreneurship and said the federal government needed to work in tandem with community-based chambers and business organizations. He said minority-owned businesses were lacking greatly in access to capital, federal contracting and small business counseling.

In his testimony, Imada argued that success in advancing economic development, business growth and new job creation relied on the federal government and federal agencies’ abilities to reduce language and cultural barriers for small businesses and entrepreneurs and  to hold prime contractors accountable for meeting minority business developmental goals.

William Wilkins, director of economic development for the Local Development Corporation of East New York in Brooklyn, argued the federal government should consider doling out more character loans, which are unsecured loans given on the basis of reputation. Hanna argued it would be a “tough recipe” to disburse loans to people with little equity even despite their reputations, but his opinion was of the minority.

“It is a difficult space, but there has to be a tolerance,” Wilkins said.

Imada also chimed in with his support.

“We are learning different ways to look at lending. We can’t do the same thing we’ve been doing day in and day out,” Imada said. “We’ve got to look at small business as an opportunity for growth. Small business people take risks each and every single day.”

Joyce Moy, executive director of the Asian American/Asian Research Institute at Queens College, also spoke on the panel and argued that government outreach was nothing but a false promise to the 68,000 Queens businesses owned by Asian immigrants. Without a culturally and linguistically appropriate service provider for minority business owners, the federal government’s small business outreach “would be for naught,” she said.

Since President Barack Obama’s election, Chang said small businesses got their hands on more than $376 billion in federal contracts – a whole $48 billion more than in the previous four years.

“Under this administration, the SBA has become more accessible and created more opportunities for underserved entrepreneurs than ever before,” Chang said. “We have been able to achieve this by connecting need with opportunity – forging new relationships with lenders and community organizations that can help us better serve these small businesses.”