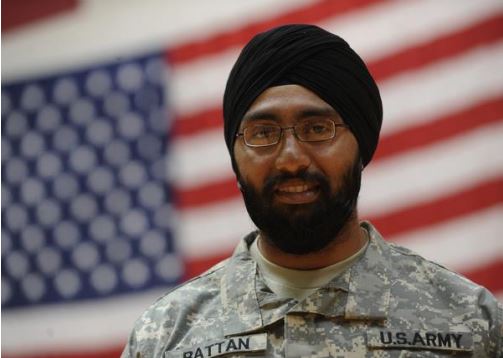 U.S. Army Capt. Tejdeep Singh Rattan is one of three devout Sikhs who have been permitted to serve in the U.S. military over the past six decades. He deployed to Afghanistan and received an Army Commendation Medal for his service. Photo courtesy the Sikh Coalition

Now essentially prohibited from serving in the U.S. Armed Forces, devout Sikh Americans should be allowed to fight for their country, U.S. Rep. Joe Crowley (D-Queens, Bronx) and more than 100 Congressional lawmakers from both sides of the political aisle said this week.

Crowley and the other legislators sent a letter to U.S. Secretary of Defense Chuck Hagel urging the federal Department of Defense to welcome Sikh Americans into the military. Because Sikhs wear turbans and maintain unshorn hair, including beards, as part of their faith, they are essentially banned from serving their country. In the past 30 years, only three Sikhs have received new permission to serve in the U.S. Army while still sporting their religious attire.

Crowley and the other lawmakers argued Sikhs should be permitted to wear their articles of faith, including turbans and beards, and still be allowed to serve in the military.

“Given the achievements of these soldiers and their demonstrated ability to comply with operational requirements while practicing their faith, we believe it is time for our military to make inclusion of practicing Sikh Americans the rule, not the exception,” the legislators wrote in their letter to Hagel.

The three Sikh Americans who have been granted individualized accommodations to serve in the U.S. Army wear turbans and maintain beards in a neat and conservative manner, both in accordance with operational requirements and their Sikh religious beliefs. They are also able to wear protective equipment, including helmets and gas masks, in conformity with safety requirements. These three soldiers have been widely praised by fellow soldiers for their service

For Sikh Americans who are granted permission to serve, such accommodations are neither permanent nor guaranteed, and must be renewed after virtually every military assignment. Sikh Americans may even be required to remove their articles of faith while their accommodation request is pending, subjecting these service members to the difficult position of choosing between their faith and their job.

Sikhs have served in the U.S. Army since World War I, and they are presumptively permitted to serve in the armed forces of America’s NATO allies Canada and the United Kingdom, as well as the country’s key partner of India.

In 1981, after more than 60 years of service by Sikh Americans, the U.S. Department of Defense adopted restrictive appearance regulations that essentially banned Sikh articles of faith. Because of this, only the three devout Sikhs have received rare, individualized accommodations to serve in the U.S. Army. Major Kamaljeet Singh Kalsi deployed to Afghanistan and received a Bronze Star Medal for his service, which included saving the lives of his fellow service members; Capt. Tejdeep Singh Rattan deployed to Afghanistan as well and received an Army Commendation Medal for his service, which included defusing a tense situation with Afghan civilians; and Corporal Simran Preet Singh Lamba, an enlisted soldier, received a promotion from specialist to corporal in recognition of his achievements.