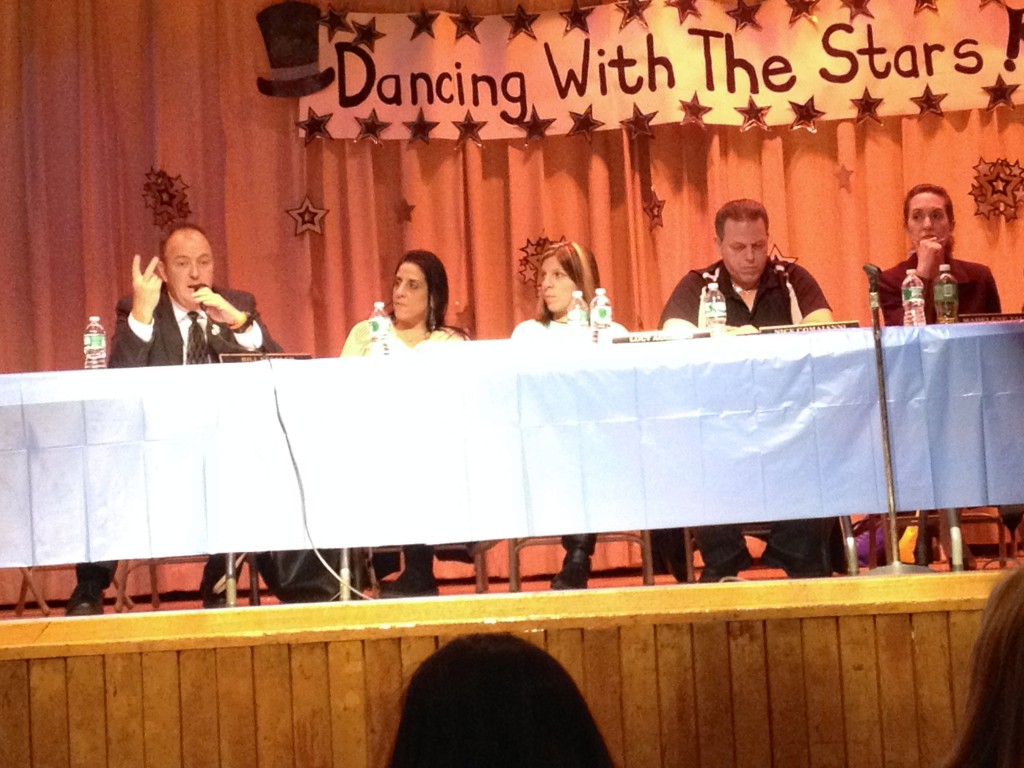 CEC 24 members, including Bill Kregler, left, lambasted the city for revoking yellow bus service for some students at PS 229, which they said has resulted in young pupils trekking across dangerous roadways to get to class. Photo by Phil Corso

PS 229 parents in Woodside are calling on Mayor Bill de Blasio to find a new solution to an old problem.

Community Education Council 24 met Tuesday night to revisit an issue that started in 2010 when the city first revoked yellow bus service from some elementary students at the Woodside school, sparking outrage among parents and educators. Members of the council asked members of the Office of Pupil Transportation to sway de Blasio’s new administration to reconsider their pleas to get students off the streets and back onto the buses.

Council President Nick Comaianni said the city’s actions put students living in Woodside’s Big Six Towers in the line of fire, forcing them to walk along dangerous routes that included Queens Boulevard and a busy intersection at 61st Street and Laurel Hill Boulevard.

“I wouldn’t let my kids walk that route, especially at that age,” he said.  “This is one of the things we would like the new administration to visit and we’ll bring it all the way to the top.”

Alexandra Robinson, executive director of the OPT, fielded most of the parents’ concerns and said the city’s provided pedestrian routes were less than one-mile long and were only further validated after surviving three appeals from the school.

“All I can tell you is that, certainly, we can look at it again,” Robinson said. “But there is an official appeal process that goes through the state Education Department in Albany, and then it’s out of my hands.”

The council has consistently called on the city to allow the displaced students onto the current bus that traveled through the Big Six towers, which they contended typically travels only half-full. Robinson rebutted, arguing that doing so would require reforms on the citywide level and that individual variance applications from parents were the more viable route.

CEC 24 member Bill Kregler ripped into the response, arguing that parents have already heard that excuse and that masking a 0.9-mile route as “less than one mile” was misleading and unacceptable.

“We heard your reasoning. It’s not a reason, it’s an excuse,” Kregler said. “We have the stats. We have increased traffic, we have increased truck traffic based on the rezoning of truck rounds down Laurel Hill Boulevard, and we have one of the most dangerous intersections at 61st Street and Laurel Hill Boulevard, based on the exits coming off the Brooklyn-Queens Expressway.”

Robinson said it was not within her power to make the call, and that the Education Department ultimately decides where buses will be utilized.

Dmytro Fedkowskyj, a former member of the Panel for Educational Policy, has long advocated for a citywide Safety Hazard Advisory Review program and spoke at the Tuesday meeting to note little change has been enacted in the years since the issue first arose.

“It is unacceptable that nothing has happened in the past few years to make that route safer,” he said. “We cannot wait for something bad to happen.”

Marge Feinberg, a spokeswoman for the DOE, said the city provides bus transportation for students between kindergarten and second grade and does not pay to transport kids living within one mile of a school. Kregler and the rest of the council argued that their children’s situation should serve as an anomaly to the rule because of the dangerous pedestrian routes they are being told to walk.

“We can build a bridge here real quick, real strong, real good,” Kregler said to Robinson. “We’ll be the first ones to put the feathers of accomplishment on your cap. But I’ll tell you this. There is a new chancellor, and the reasoning behind this being taken away, logistically, is not there.”