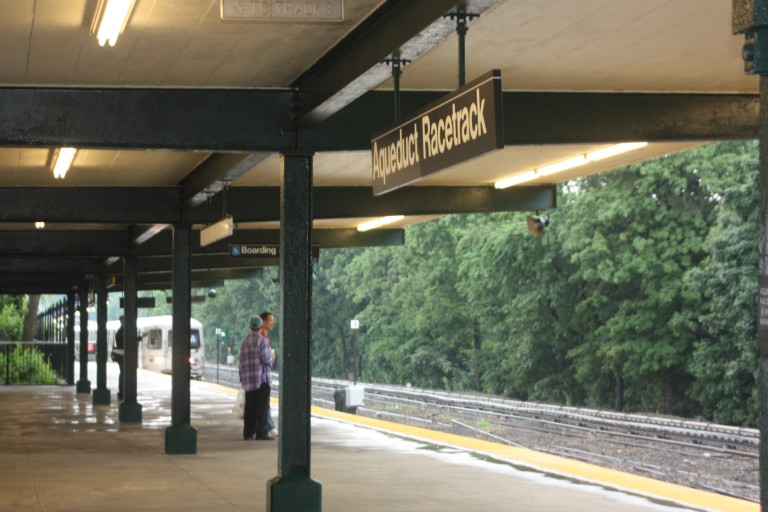 The A train, shown here at the Aqueduct subway stop, was named the dirtiest subway line in Queens, according to a recent report by the Straphangers Campaign. File photo

Subway cars throughout the city are becoming dirtier with each passing year – and Queens residents are not immune to the trend, with the A train being named the worst in the borough, according to a recently released survey by the Straphangers Campaign.

The number of clean subway cars declined between 2011 and 2013, according to the annual “subway shmutz” survey released last week by the transportation advocacy group.

The worst performing line was the D, which runs from Brooklyn to the Bronx, with only 17 percent of its cars being labeled as clean – down from 49 percent in 2011.

The best performing line in the survey was the L, which passes through Ridgewood on its way from lower Manhattan to Brooklyn. The campaign rated 63 percent of its cars as clean – up from 58 percent in 2011.

The 2011 car cleanliness survey is based on 2,000 observations of subway cars by the campaign between September and December. The 2013 survey covered a nearly identical period of time that year. Cars were rated on 20 lines for cleanliness of floors and seats and landed clean marks if they were “basically dirt free” or had “light dirt.” Cars were rated not clean if they hand dingy floors or one or two sticky dry spots – or heavily dirty if there was any opened or spilled food, rolling bottles, sticky wet spots, or seats unusable due to unclean conditions.

In Queens, the A line – which runs from Rockaway to northern Manhattan – fared the worst, with just 26 percent of its cars being deemed clean. The F train was the second worst at 31 percent. The J – which travels from Jamaica to Wall Street – and 7 – which goes from Flushing to Times Square – lines both landed the highest marks, with 55 percent of their cars being marked as clean.

“Will subway cleanliness continue to suffer as budgets grow tighters?” asked Cate Contino, the coordinator for the Straphangers Campaign. “We will do another survey next year, compare and find out.”

The full report is available to the public online at http://straphangers.org/shmutz13/