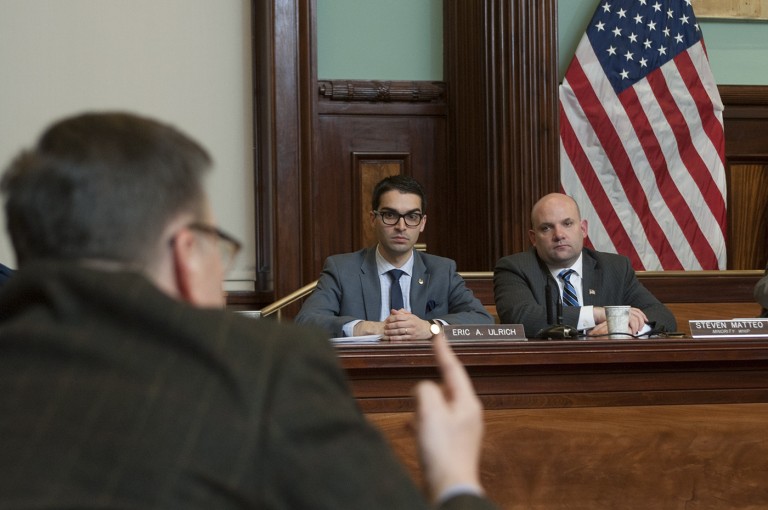 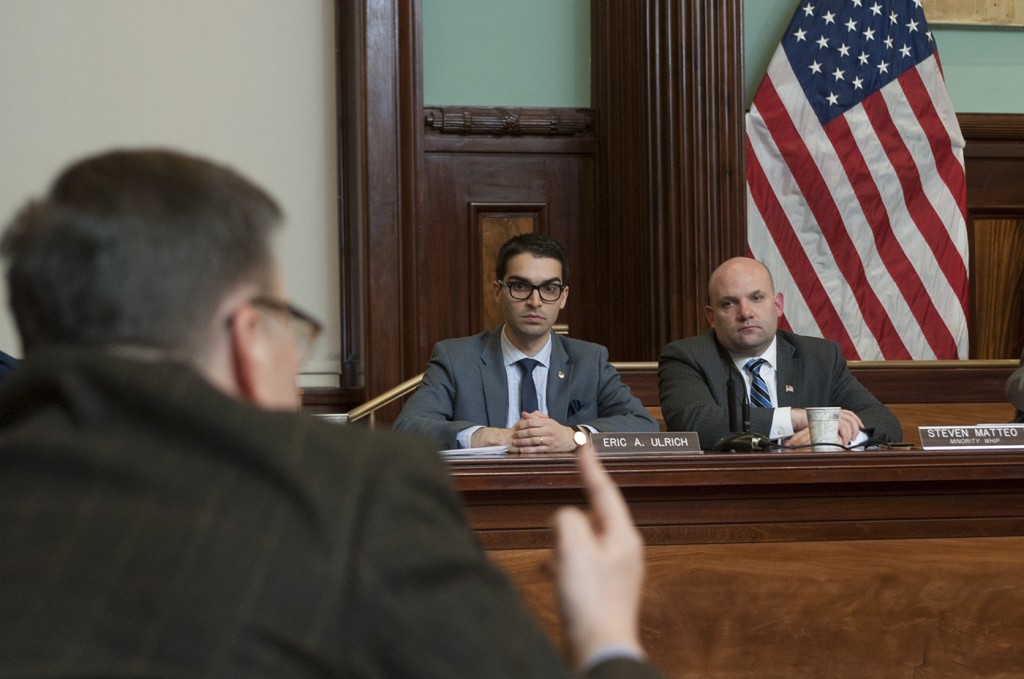 Councilman Eric Ulrich, center, attends a hearing on the Build It Back program at City Hall Monday. Photo by William Alatriste/NYC Council

For seven hours, they spoke of wiping out retirement savings and college funds to pay for a mortgage on a house that no longer stands, of sleepless nights wondering how they were going to avoid foreclosure, of jumping from relatives’ houses to friends’ houses for months and months after Hurricane Sandy. They spoke of the stress and the heartbreak and the never-ending stream of doors that seemed to be closing in their faces, from insurance companies to the city.

The long line of people who patiently waited to testify about the lives that have been turned upside down in the 17 months since Sandy hit at the end of October 2012 did so in the context of a hearing on the city’s Build It Back program at City Hall Monday, but the day was more than just a wave of vehement criticism for an initiative that has helped just a handful of of the 20,000 families who applied for aid to rebuild their homes – though there was plenty of that. It was a verbal documentation of just how much vitriol exists for the government from residents who said they have done everything they were supposed to their entire lives – go to work, file taxes, pay their mortgage – but still feel as though they have been left to fend for themselves in the more than year and a half since the storm that devastated much of South Queens, South Brooklyn, Staten Island, and lower Manhattan.

“So many of us have depleted our savings, have had to take personal and pension loans and max out credit cards to pay for living expenses – and are only holding on by a thread financially,” Michael Del Pino, of Broad Channel, testified at the joint hearing held by the City Council Committees on Recovery and Resiliency, Housing and Buildings, and Environmental Protection on the status of the Build It Back program. “There is no mechanism in the housing industry for mortgage forbearance or reprieve, so the bank requires that they continue to be paid despite [a homeowner] not being able to occupy a house.

“Additionally, my children – 7 and 4 years old – constantly ask about returning to their house and are probably tired of dealing with a mother and father now completely consumed with fighting the city so they can just go home,” Del Pino continued at the hearing led by Council Members Donovan Richards (D-Laurelton), Mark Treyger (D-Brooklyn) and Jumaane Williams (D-Brooklyn). “I don’t even want to talk about the number of times I’ve considered giving up and walking away from the house.”

Del Pino was one of many from South Queens to submit testimony Monday about Build It Back, a program created by former Mayor Bloomberg that was granted about $1.45 billion in federal funding aimed at helping Sandy victims afford to rebuild their homes. However, 17 months after the hurricane decimated much of the city’s coastline, only three homeowners have been reimbursed for construction work, and work has begun on another six homes – but none of the six have been completed. About 20,000 people have applied for help.

Councilman Eric Ulrich (R-Ozone Park) questioned  Peterson during and conveyed the high level of frustration many of his constituents have experienced with the program.

“Build it Back has been an abysmal failure since day one,” Ulrich testified. “Bureaucratic red tape, lost paperwork, and overall lack of accountability have stood in the way of people getting the help they need. I am hoping that the new administration will address these longstanding issues and deliver the relief that homeowners and residents have been waiting for.”

Assemblyman Phil Goldfeder (D-Rockaway Park) too submitted testimony, noting that nearly 7,000 households in his district have applied for the Build It Back initiative – more than 40 percent of the program’s total number of applicants citywide.

“To date, not even a single resident has received the assistance they so desperately need and deserve,” Goldfeder said in his testimony. “Any program of this scope is bound to experience delays in implementation, but this is unacceptable.”

One of the main points of contention with Build It Back has been that middle-income and even working-class residents had been told by the city that they made too much money and would likely not see any aid from the city until 2018 – if they saw it at all. Residents lambasted this, and Goldfeder stressed that of the many constituents who told his office their income was considered to high to access more immediate funds, there was a household with parents who were a firefighter and teacher and an elderly parent just barely making ends meet on Social Security.

Sophia Vailakis-DeVirgilio, who still has not been able to return to the Broad Channel home where she lived with her husband and young daughter before Sandy, said she, a help desk analyst at a call center in a law firm, and her husband, a teacher and high school coach, also apparently make “too much” to be labeled a priority under Build It Back.

“Those of us with a decent income are being forced to deplete our savings and/or sent into ridiculous debt that the government stands to make money on, which seems like a redistribution of wealth – class warfare,” Vailakis-DeVirgilio, who testified at the hearing, said after Monday’s event. “…People are dropping out of the program for one reason or another, walking away from their properties or living in squalor, letting recovery programs off the hook.”

Over the weekend, de Blasio and U.S. Sen. Chuck Schumer (D-NY) announced the city would be changing Build It Back to distribute funding to those who had previously believed they would be barred.

However, residents said many of their neighbors have become so frustrated with Build It Back that they have given up entirely on the process – despite the fact that they are still in debt or have not been able to return to their homes.

“Many of us are still in the process of recovering from the worst natural disaster to hit our area, but we are faced with an even greater man-made disaster: The Build It Back program,” said Roger Gendron, the president of the New Hamilton Beach Civic Association and a resident of Hamilton Beach for more than 50 years.

John Cori, the co-founder of Friends of Rockaway Beach, called Build It Back a “complete, utter, bureaucratic catastrophe.”

“It is a mess,” Cori testified. “Since applying for Build It Back, my personal information has been lost, I have been told on six occasions that my application was complete, only to find out on my own that I was missing a document. New forms are added without any communication to the applicant. The application asks to list any tenant’s salary. The tenant’s salary is then unfairly added to the applicant’s annual income.”

“Where did [New York City’s] sense of urgency and compassion disappear to?” Cori asked.