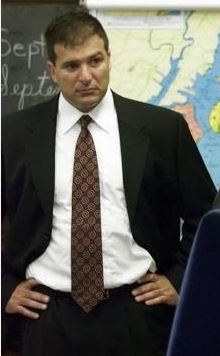 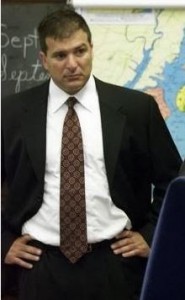 Former PS 49 Principal Anthony Lombardi has been accused of allegedly sexually harassing a teacher while working at the Middle Village school. File photo

A settlement conference has been scheduled between a former Middle Village teacher and her boss accused of sexual harassment, court records showed.

Special education teacher Lisa Calise first filed the lawsuit against former PS 49 principal Anthony Lombardi in December, alleging she was forced to resign after shooting down his sexual advances, according to court documents. Their attorneys met last week and pegged May 30 for the initial settlement conference to determine whether or not the case will go to trial.

At the May conference, a city Department of Education representative will have a chance to respond to Calise’s issues and identify a “first wave” of depositions if the case cannot be settled, the U.S. District Court in Brooklyn said.

Calise’s formal complaint alleged Lombardi consistently asked her if she had a boyfriend, told her she was a “pretty girl,” asked whether or not her father “kept tabs on her,” rubbed her shoulders, pushed his body into her chest, grabbed her, and said he “always wanted a good Italian girl.”  Lombardi denied all allegations accusing him of sending “a barrage of blatant and relentless sexual harassment” towards Calise, who worked at the school at 63-60 80th St. from 2010 to 2012, according to court records.

The complaint against Lombardi alleged the former principal’s history for sexual harassment of female teachers was “well known within the school.”

In one instance, Lombardi allegedly told Calise stories at a holiday party in December 2010 of former female employees he had “let go of” in the past for telling him what to do at work, according to court records.

“Speaking of one employee in particular, he said, he, ‘said goodbye and got rid of her’ because she used to tell him what to do,” court documents stated. “He further stated that, ‘These Long Island girls think who they are. Lisa, you’re from Long Island.”

The sexual advances allegedly went on and escalated over Calise’s two years at the school until a meeting in late 2011, when Lombardi allegedly accused the teacher of being “defensive” towards him and denied her tenure as punishment, court records said. Calise resigned soon after.

In his official response to the complaints, Lombardi’s attorney Zachary Carter said that while the former principal would occasionally have conversations with Calise, they were only within his capacity as principal of PS 49.

Lombardi was featured in a 2012 New York Magazine article as one of former Mayor Michael Bloomberg’s models for educational reforms in his agenda. He stepped down after 17 years on the job in March after announcing his retirement in December and was replaced by Tom Carty, who served for nearly nine years as an assistant principal for IS 162 in Brooklyn.

Carty has already received praise from parents at the school and addressed PS 49 parents at the Community Education Council 24 meeting last week to say hello after his first three weeks on the job.

“I didn’t realize how ready I was for change until I got to the new school,” Carty said. “The students, parents and staff have all been very welcoming.”