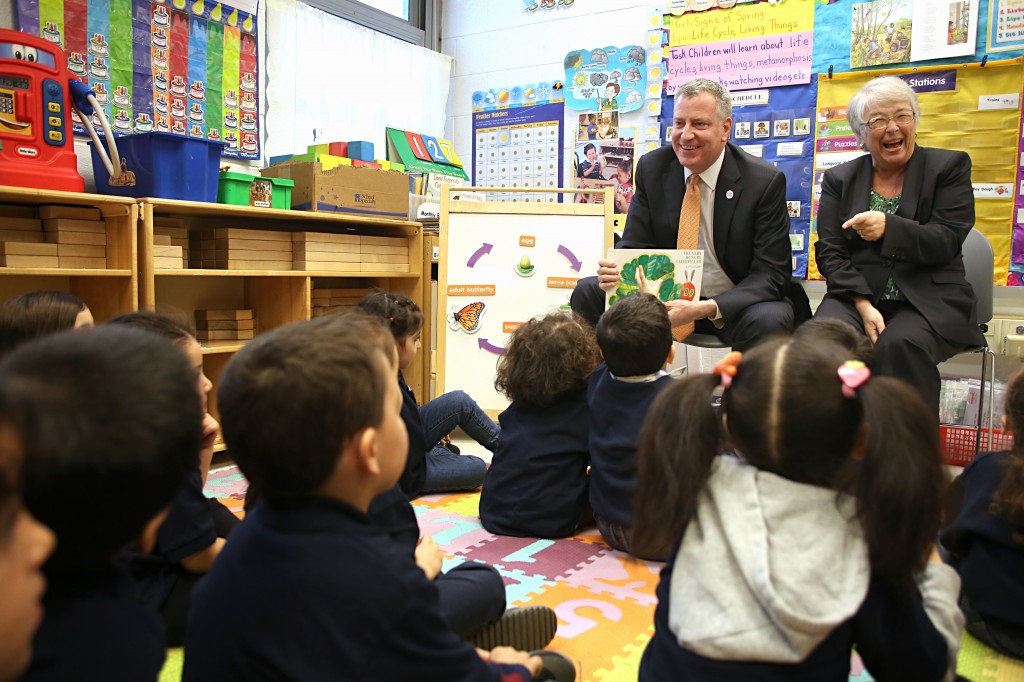 Mayor Bill de Blasio picked a school in Ridgewood to push his universal pre-kindergarten program, for which parents have until the end of April to apply.

“This is about reaching parents where they live,” de Blasio said to a room full of students and administrators at PS 239. “It’s going to take a mix of new media and old-fashioned community organizing to reach every family. From our Taxi and Limousine Commission to community groups in immigrant neighborhoods, we’re working with every partner we can find to get the word out about new pre-K options opening up.”

The Ridgewood school has only offered half-day classes for pre-kindergarten students, but de Blasio took the setting as an opportunity to remind parents that full-day seats are on the way to about 53,000 pupils come September – as long as they apply before the April 23 deadline. Parents who apply will be notified about their children’s placement in June, the city said.

The city has pumped six figures of funding – $300,000 – into outreach efforts regarding pre-kindergarten – which the de Blasio administration has made one of its top priorities since the mayor took office in January – including ads on bus shelters, buses and subways urging parents to register their children before the deadline, the mayor said.

“But the most important pieces of this equation are everyday New Yorkers,” the mayor said. “Talk to your family. Talk to your neighbors. Help us get the word out.”

Universal pre-kindergarten was one of de Blasio’s most frequent talking points in his run for mayor last year, and he originally pushed for it to be funded by increasing income taxes on the city residents making $500,000 or more each year. Gov. Andrew Cuomo, however, disagreed with the tax raise, and the state budget instead includes $300 million for the city plan. De Blasio would have had to get the greenlight from Albany to be able to raise taxes, which he did not receive.

The $300 million was roughly $40 million less than what de Blasio had hoped for to fund the pre-K plan and did not include another $190 million he wanted to expand after-school activities for middle school students, but the mayor told reporters last week that he was still pleased with the funding.

“I and the Assembly majority have long maintained that pre-K is the critical jumpstart our children need to be successful,” Silver said. “I am so pleased that we have a powerful partner in Mayor Bill de Blasio, who knows that this program can be truly transformational and will provide new hope for working families and their children.”

City Councilwoman Elizabeth Crowley (D-Middle Village) also took to PS 229 in Woodside that same week to pitch the pre-K plan at the school’s annual parent volunteer breakfast. She spoke inside an existing pre-K class that currently hosts only half-day classes.

“Every single 4-year-old in New York City will soon have access to the early education that studies show is a strong indicator of a child’s lifetime learning,” she said. “We need our parent leaders now more than ever to help get the word out about the 1,200 new full-day pre-K seats coming to Queens this fall before the April 23 deadline.”