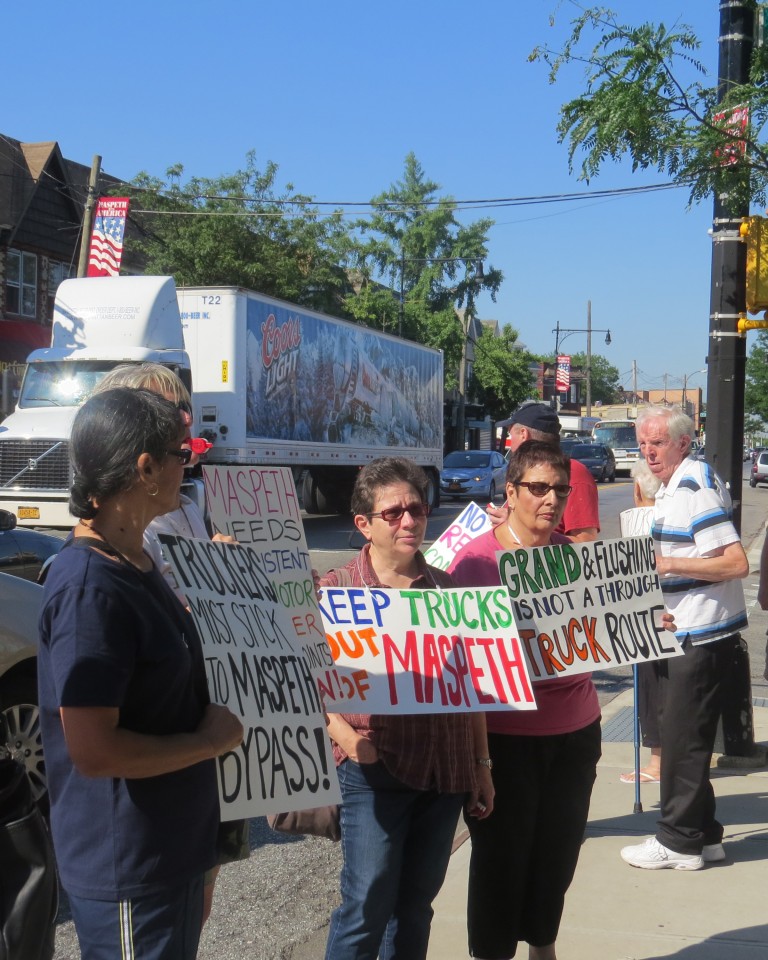 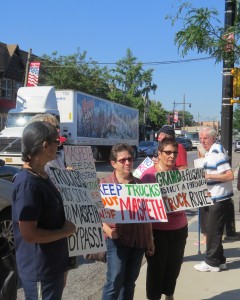 Residents have held many protests against truck traffic in Maspeth, including this one last summer. File photo

Should Congress approve a proposal to increase the size and weight limits for semi-trailer trucks, Queens residents already worn down by thousands of trucks passing through such neighborhoods as Maspeth would further see their quality of life deteriorate, borough leaders said.

“It’s crazy – we have trucks coming up residential blocks now; our streets can’t stand all this weight,” said Roe Daraio, president of the COMET – Citizens of Maspeth and Elmhurst Together – Civic Association – a group that has for years been fighting truck traffic in the Maspeth area.

Congress is now considering whether to allow bigger trucks to travel the country’s roads as it works on reauthorizing the surface transportation bill, otherwise known as MAP-21. With pressure from some of the country’s largest trucking companies and businesses pushing for increased size and weight limits – with many business owners saying it would help to significantly curb costs – a vote could come as soon as this month.

Specifically, Congress is looking at a proposal that would increase weight limits for single-trailer trucks to 97,000 pounds – 8.5 tons more than what is currently allowed.

A national nonprofit, the Coalition Against Bigger Trucks, is working to stop the plan, and it issued a release stating that Putnam County Sheriff Don Smith, a trustee and former president of the New York State Sheriff’s Association, also strongly opposes any increase to truck sizes or weights.

“Bigger trucks have bad news written all over them,” Smith said in a statement.

“Driving on our highways is dangerous enough,” he continued. “We don’t need to make it riskier by introducing bigger trucks to the road.”

Smith noted that there were more than 3,700 large-truck collisions in 2012 in New York – from which 100 people lost their lives.

“Increasing trucks sizes or weights would only cause them to be even more dangerous to motorists,” Smith said. “Some large trucking companies want to save on shipping costs, but the price is public safety.”

In Maspeth, massive tractor-trailers, in attempts to avoid congestion on the Long Island Expressway, frequently make their way into the neighborhood, traveling on such streets as Grand and Flushing avenues. This traffic, residents have long said, creates intolerable noise pollution, as well as raises serious safety concerns for area children – and adults walking along residential roads that trucks have been taking.

“We need to take Flushing and Grand avenues off the truck routes altogether,” Daraio said.

In response to complaints from area legislators and civic leaders, the city in 2011 implemented what is known as the Maspeth truck bypass – a route that was meant to funnel truck traffic off of Grand and Flushing avenues. The city also labeled Grand and Flushing avenues as local truck routes – meaning only vehicles making deliveries in the area are supposed to use the streets dotted with residences and small shops – though residents say truck drivers flagrantly disobey this.

Adding heavier trucks to this mix, Deraio said, would be even more of a disaster.

According to a study published last year by the Multimodal Transportation and Infrastructure Consortium at Marshall University, 95 percent of law enforcement officers believe heavier and longer trucks would be more dangerous.

Additionally, Smith noted that heavier trucks accelerate damage to bridges and roads, and the Coalition Against Bigger Trucks stressed that there were 6,887 structurally deficient or functionally obsolete bridges in New York state as of 2012, according to the Federal Highway Administration.