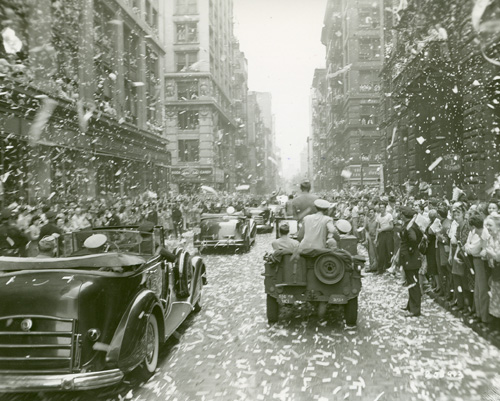 When World War II ended, paper seemed to rain from the sky during the ticker-tape parade the city held for the veterans – a massive affair when what is known as the “Canyon of Heroes” in lower Manhattan was flooded with hundreds of thousands of people jubilantly celebrating.

As about 5,438 tons of confetti poured from area office buildings onto the streets below, people danced and laughed in ways they probably hadn’t for years. But, most importantly, veterans understood they were appreciated. They were welcomed home. The years spent abroad in places like France and Germany, watching some of their closest friends die, meant something.

Parades are not frivolous affairs – they are, yes, typically filled with enthusiasm and they are short-lived occasions but they are important. These hours filled with cars honking and veterans waving and people clapping matter because they are public displays of support for people who have said, yes, I would die for my country.

Those kinds of people do not come in abundance, and in recent decades we have not shown them the kind of support they deserve. Vietnam veterans received a parade 10 years after they returned home – to a country that had turned against them. Veterans have long had to battle a slew of problems after they come home, and that is no different with those returning from Iraq and Afghanistan. Now, veterans are facing a rising rate of unemployment, devastating wounds – such as missing limbs, an incredibly high rate of PTSD, homelessness, and more.

There’s so much more we need to do for our veterans – and that includes showing them the country is there for them. That we recognize their sacrifices – the time they’ve had to spend away from family and friends, the births they’ve missed, the children they haven’t been able to see grow up.

We need a multi-faceted approach to improving the way we welcome veterans home, whether that’s with help with education or housing or mental health services – and it includes a huge event where the general public can come out and shower the veterans with the kind of love they deserve.

A group of veterans and U.S. Sen. Chuck Schumer last Sunday called on the city and the U.S. Department of Defense to hold a parade for Iraq and Afghanistan veterans – something we are fully behind. Two years ago, Mayor Bloomberg said no to such a parade, which was an offensively huge mistake. Mayor Bill de Blasio has already said yes to such an event, and the DoD is reportedly reviewing the request.

Let’s not wait 10 years, like we did with Vietnam, to remind these men and women that we respect them and want to welcome them back to a country where they will receive all the support they need to navigate life after war.

We may not need to throw 5,438 tons of paper – but there is absolutely no reason that this parade shouldn’t happen. And, as we prepare for the parade, we need to think about the people we’re celebrating and the other types of support they need.

Gov. Cuomo recently held a summit on veterans in Albany, at which time state officials spoke to veterans about a litany of issues – including those previously mentioned in this editorial. But there’s so much more that needs to be addressed – and that means spending more on veterans. That means more money going to our veterans’ hospitals, to education for veterans, to mental health services for veterans. Soldiers’ battles do not stop when the gunfire does, but as they fight everything from PTSD to struggles with housing, they should be able to rely on their country to catch them should they fall.