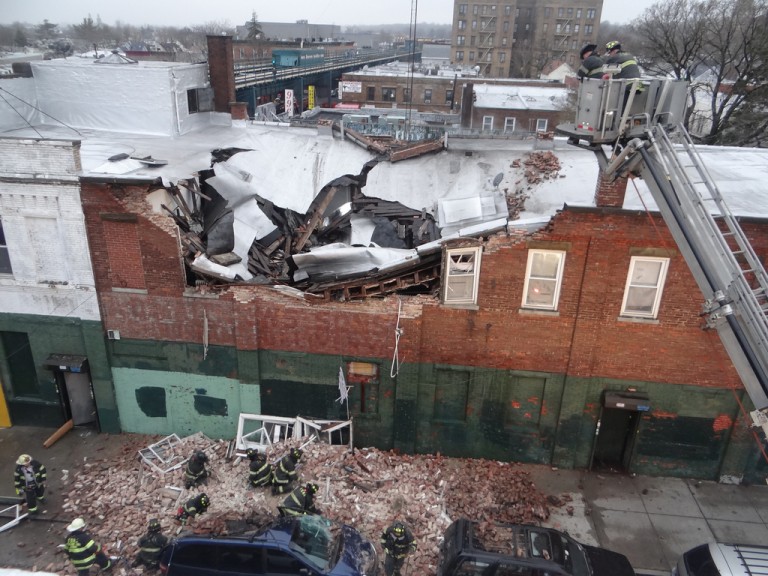 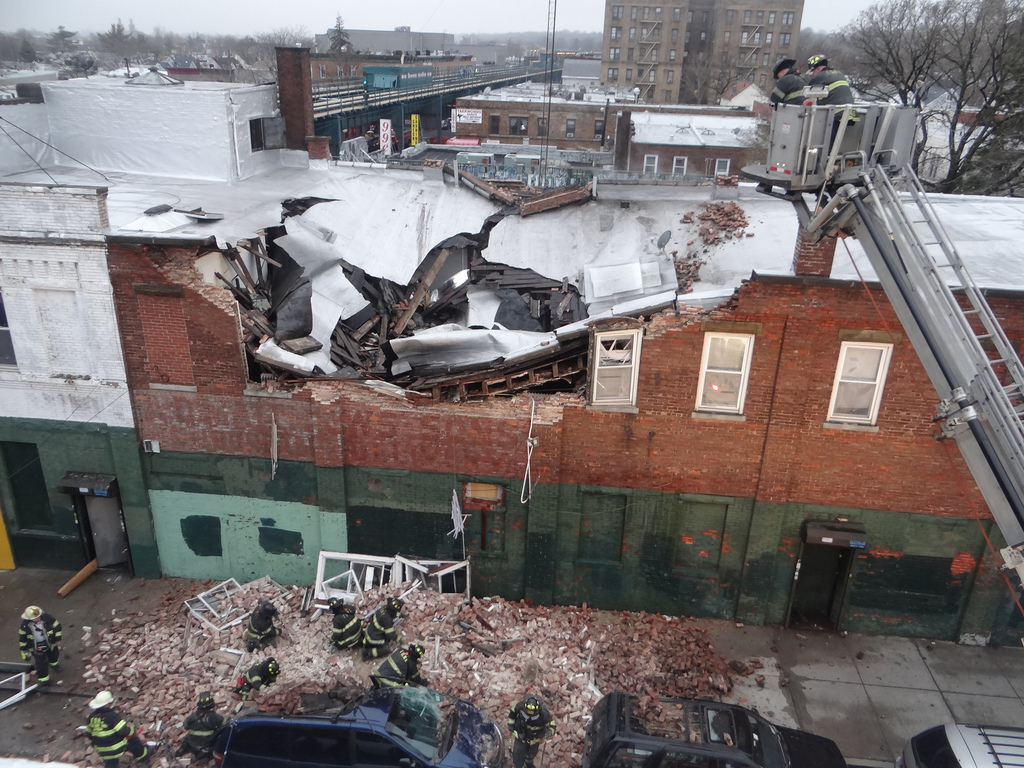 A building at 78-19 Jamaica Ave. that partially collapsed more than one year ago is slated for be torn down, city officials said. File photo

After pleading with the city Department of Buildings for a year to do something about a building that partially collapsed last April, driving a major neighborhood organization from its home and sparking major concerns about residents’ safety, area leaders cheered a decision by the city to tear down the structure.

The city DOB ordered the demolition of the property at 78-19 Jamaica Ave. last week, after the owner of the site, George Kochabe, did not show up to an April 10 court hearing that was scheduled because Kochabe has not paid thousands of dollars in fines the city slapped on him for a litany of problems with the structure.

The city Housing Preservation Development is the agency that will carry out the demolition work, which could happen within weeks, elected officials said.

“This is a great step forward,” said Martin Colberg, president of the Woodhaven Residents’ Block Association, a community organization that spearheaded much of the movement to tear down the building. “I got a call from [Assemblyman] Mike Miller about it, and I said, ‘Excuse me, Mike? Am I hearing this correctly?’ It was amazing.”

The building, which previously housed a furniture store but was empty at the time of the incident, partially collapsed April 12, 2013, sending a waterfall of bricks cascading onto the sidewalk and street below. A car was crushed but no one was hurt in the incident. Since last April, the site has remained virtually untouched.

Concerns about safety and structural damage prompted the Catholic Charities Woodhaven-Richmond Hill Senior Center, located next door to the collapsed site, to relocate to the nearby American Legion Post 118 building. Its move caused major financial woes for the Woodhaven-Richmond Hill Volunteer Ambulance Corps, which is also located next door and relied on the income it received from renting space to the senior center.

Before the building can be torn down, HPD has to conduct an asbestos inspection at the property, after which it will be able to set a date for demolition work. The agency will bill the owner for the work, and if it is not repaid HPD will place a lien on the property.

“If there’s a tremendous amount of asbestos, it could take a little longer, but [HPD] put it on the fast track,” said Miller (D-Woodhaven).

Saying he was “relieved we were finally going to get some action,” Miller said area seniors are also thrilled that they could be returning to their center in the foreseeable future. Repair work still must be conducted at the building that houses the senior center and ambulance corps, which has not been done because of fears that the site at 78-19 Jamaica Ave. could completely collapse. Miller and state Sen. Joe Addabbo Jr. (D-Howard Beach) have allocated $50,000 to help with some of the ambulance corps’ repair work.

Councilwoman Elizabeth Crowley (D-Middle Village) too said she would work to ensure the corps and the senior center are able to finally have a safe home building.

“Finally the Department of Buildings is taking action – it has been a difficult year trying to push both the agency and the land owner to do the right thing,” Crowley said. “I will continue to work with DOB and the Woodhaven community to make sure that the senior center and the ambulance corps have proper access to the building, and that responsible development happens at this site.”

Legislators and community leaders said that should the city end up placing a lien on the property, they hope it will become a positive space for the neighborhood that has for far too long had to deal with an absentee landlord who has not once addressed residents’ concerns about the structure.

“We’ve given the owner ample time to fix it up, demolish it – he has shown no interest in this property,” Addabbo said. “If there is a lien on the property, we’ll have to start a discussion in earnest about the future of that site. There’s a need for senior housing; there’s a need for community space.”

Miller said he wants to make sure the property “becomes a beautiful location for the community,” and Colberg said he would potentially like to see it transformed into a community center, garden space, or possibly a park for the seniors.