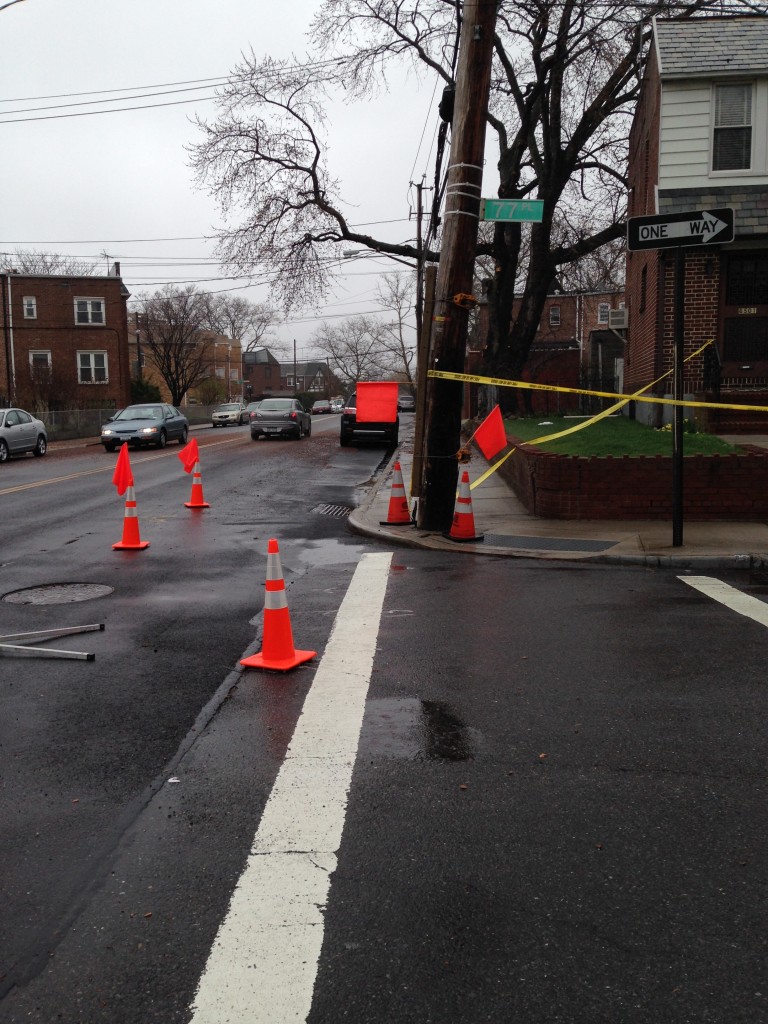 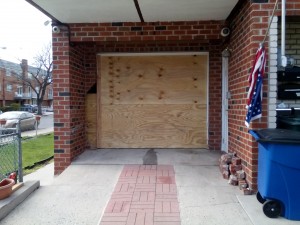 Fortunately, no one was injured in a “freak” accident that occurred in Middle Village on April 12.

But, the odd circumstances of the collision had some neighbors questioning anew the NYPD’s accident investigation protocols.

The 1:15 a.m. accident at 77-31 Furmanville Ave. demolished a garage door at the same address, as well as badly damaging a Con Ed power pole at the intersection of 77th and 78th Streets.

Neighbor Theresa Doria, whose house sits on the corner of the intersection where the pole was damaged, initially posted the details of the strange accident on Facebook, telling people that a neighbor backed his SUV into a power pole that was now in danger of falling onto or near her property.

Doria, a 43-year Midville resident who witnessed the accident, said her neighbor was “ramming his car into his own house.” The SUV was also apparently driven through the home’s closed garage door.

Doria repeatedly said she was surprised that cops from the 104th Precinct didn’t give the driver either a field sobriety test for alcohol or a blood test to look for illegal drugs.

She also alleged that the neighbor at 77-31 Furmanville Ave, whose name she couldn’t recall, had past parties with underage drinking and that officers from the 104th never seemed to stop and check into what was happening.

Reached by phone, the driver involved in the accident, Sal Vizzini, said that the collision occurred when the accelerator pedal on Vizzini’s 10-year-old Chevy Tahoe SUV got stuck, causing him to back through his own garage and hit the Con Ed pole across the street.

“I shifted into reverse and I went back really fast,” Vizzini said. “I’m lucky no one was coming across the road, otherwise it could have been a lot worse.”

Vizzini, 62, who owns the home at 77-31 Furmanville Ave. and also operates a construction business at the same address, called the incident a “freak accident.” 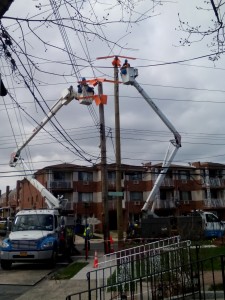 A Con Ed repair crew works on the pole damaged in the accident. Photo by Alan Krawitz

Con Ed Spokesman Allan Drury said that while there was no immediate danger of the pole falling, the utility would replace the pole in the interest of safety.

“A danger with a vehicle striking a pole is live wires and other electrical equipment coming down,” he said.

Drury said that the pole carries two sets of electric wires, as well as cable, telephone and a fire alarm box.

“We must set another pole and transfer our wires.  We will then refer it to NYC (for the alarm box) and the other utilities (cable and phone) to move their wires. The last utility to move its equipment removes the old pole,” Drury explained.

While Drury did not elaborate on the costs involved with replacing the pole and transferring the wires, he did say the utility would “seek recovery of costs on behalf of ratepayers.”

Vizzini said that his auto insurance policy would cover costs related to the accident.

However, Doria along with several other neighbors who did not want to give their names questioned why Vizzini was not given a field sobriety test for alcohol or drugs at the scene.

“His garage door was down and he drove through it…plus it was 1am on a Saturday morning,” Doria said.  “Wouldn’t you assume someone was drunk who did that?” she asked.

“At least you give him a Breathalyzer and rule out alcohol,” Doria added, estimating that the SUV was doing about 50mph when it hit the pole, sending flying glass onto her lawn.

“[Vizzini’s] wife came out of the house screaming at him,” she said.

Doria reported that in addition to cops from the 104th, two fire engines and an ambulance also responded.

An early morning accident on April 12 demolished a garage door in on Furmanville Avenue in Middle Village and damaged a Con Ed power pole at the intersection of 77th and 78th streets. Courtesy Theresa Doria

Vizzini refused medical attention at the scene. Doria said that Vizzini got out of his SUV and immediately said his gas pedal was stuck.

Another neighbor, who did not want to give her name, reported the driver “looked as if he was on something.”

Doria also said she had given her name and number to 911, because she saw what happened. But, she said that officers never contacted her regarding the accident.

Vizzini’s SUV was reportedly taken to a local collision shop and not impounded by police for any equipment testing.

A police spokesperson said that every accident situation was different and that the decision to test for alcohol/drugs or not is based on responding officers’ discretion.

The spokesperson also added that there was no criminal complaint, just a standard MV-104 accident report filed.

Repeated requests to the NYPD’s public information office for information regarding motor vehicle accident protocol were not answered.

The NYPD’s accident investigation procedures have been under fire in the past few years. Most recently, in 2012, several City Council Members called for an overhaul of the city’s general protocols which dictate that traffic collision investigations are only limited to those involving injuries or death.

One irony of the city’s protocol was pointed out by Transportation Alternatives in 2012 which noted that police use the same accident form for a serious injury, such as a lost limb, or a minor traffic infraction, such as a broken tail-light.

Moreover, the online news outlet Streetsblog has in the past few years documented countless cases where police have done a minimum of investigations involving pedestrian fatalities.

Last year, the NYPD announced plans to overhaul its’ crash investigation procedures starting with dropping use of the word “accident” to describe collisions and also adding more crash investigators  as well as investigating collisions not limited to those involving injuries or death.