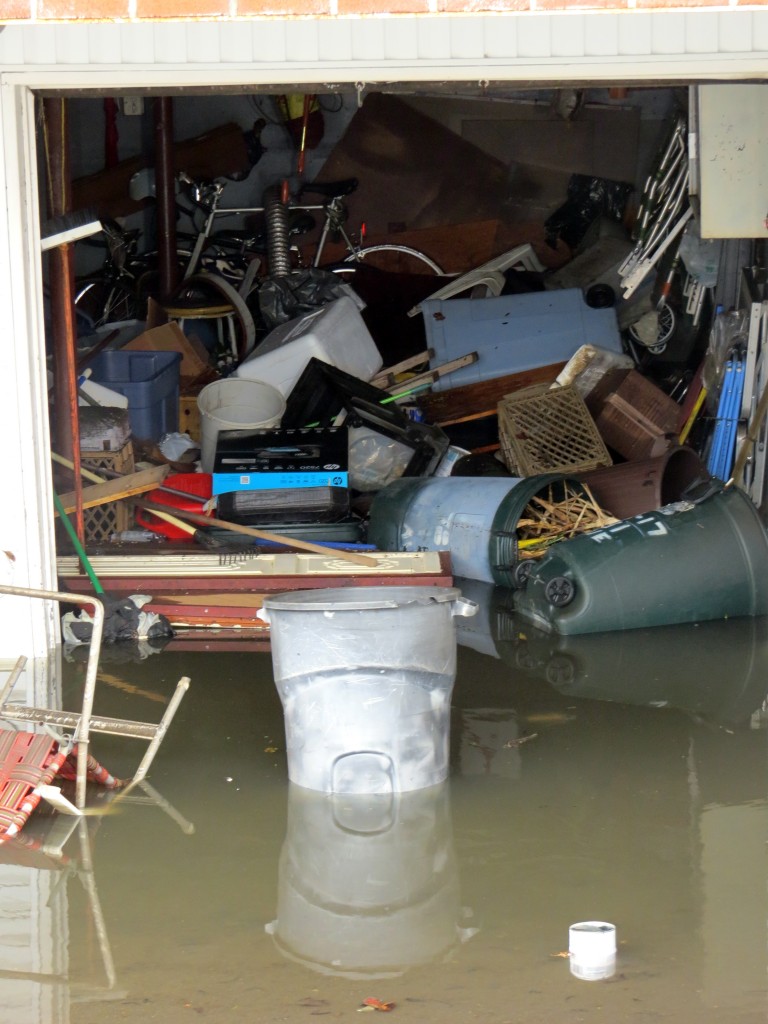 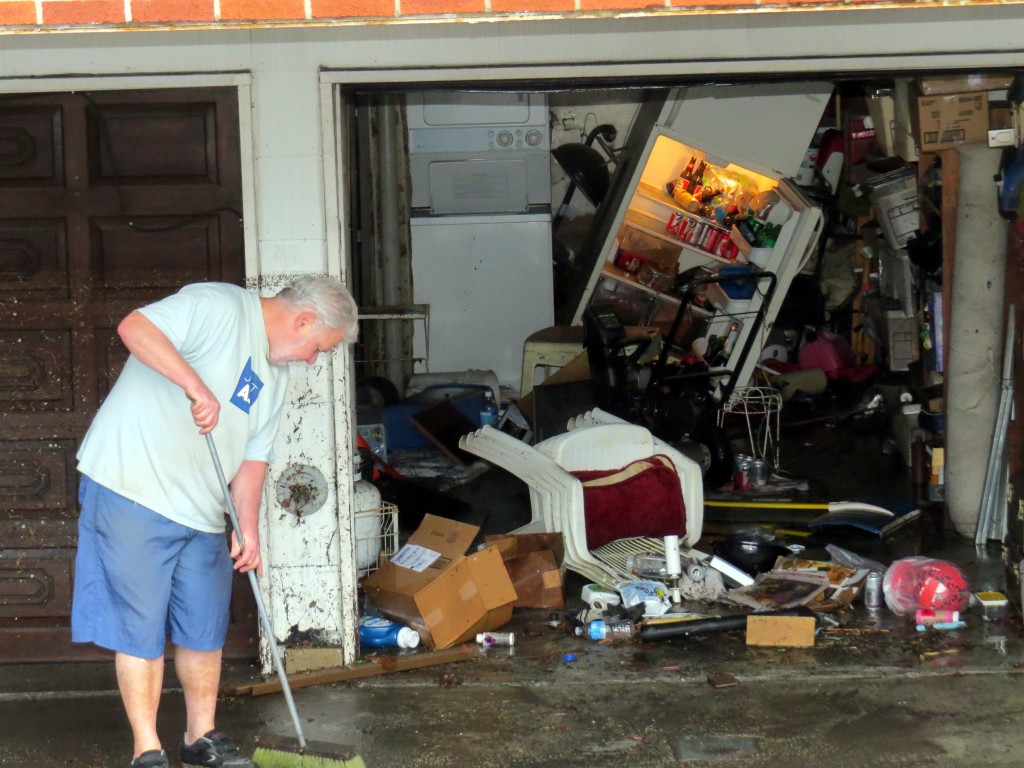 A massive storm dumped more than five inches of rain onto Queens last Wednesday night, flooding hundreds of homes in Lindenwood and driving devastated residents to once again deal with, and even evacuate, destroyed houses that sustained tens of thousands of dollars in damages.

Rick Quinones points to where the water rose in his home’s basement, where his mother-in-law had been living. Along with the water heater, almost everything in his basement was destroyed, from the stove to furniture and clothing. Photo by Anna Gustafson

“This was way worse than Sandy for us – we were lucky in Sandy,” said Rick Quinones, who owns a home on 79th Street near 149th Avenue. “My mother-in-law’s apartment was completely destroyed. The bed, the kitchen, the water heater – everything’s gone. Everything in the garage – bikes, treadmills – gone. It kills me.”

The deluge of rain last Wednesday marked the 10th highest daily total ever recorded at Central Park, and LaGuardia Airport reported 5.26 inches of rain – the amount the city typically receives in an entire month. In South Queens, the storm, which city officials said was made worse by the high tide and new moon, caused waist-high water to wreak havoc on people’s basements and garages, forcing them to re-live what many had to do following Hurricane Irene and Hurricane Sandy: Vacate homes from which they had to throw out everything from old, irreplaceable family photos to furniture that once filled entire rooms and expensive electronics and vehicles. Following the storm, Lindenwood’s streets were lined with soaked couches, photos laid out to dry, and many a person sitting, head in hands, in a neighborhood that they say has for far too long dealt with flooding.

When residents assessed the damage in their homes following the storm, many were faced with destroyed garages and basements. Photo by Robert Stridiron

“This issue has been going on for many, many years,” said James Noto, who grew up in Lindenwood and still resides there. “I grew up in the house I live in, and I’d come home in the early 1990s to find the garage door broken off and floating.

“People are afraid to come out and say it because they’re worried about their home values going down…but we’re up all night crying because our homes are being destroyed,” said Noto, who had four feet of water rush into his garage and basement, destroying about $40,000 worth of property – everything from a car to his children’s play area and a flat screen television.

“Every time it rains, I live in fear and worry,” Noto continued.

City Office of Emergency Management Commissioner Joe Bruno and city Department of Environmental Protection Emily Lloyd, both of whom led community briefings about the flooding Thursday and who attended the Community Board 10 meeting last Thursday night, said they have not yet determined the cause of last week’s extensive flooding but are studying it and will determine what the city may do to mitigate future flooding. Both Bruno and Lloyd urged residents to file water damage claims with the city Comptroller’s office – which must be done within 90 days of the event. The form to submit a claim may be found here: http://comptroller.nyc.gov/forms-n-rfps/filing-claims/. 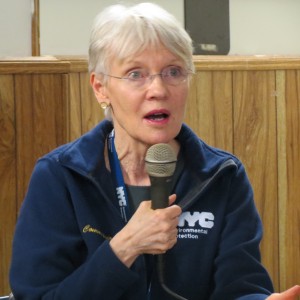 City Department of Environmental Protection Commissioner Emily Lloyd told residents at a Community Board 10 meeting last Thursday that the city would be working to assess the flooding situation in Lindenwood. Photo by Anna Gustafson

“I don’t know if there’s liability here…but it’s important to put your claim in,” Bruno said.

Bruno and Lloyd also stressed that city agencies would continue to operate in the impacted area in an effort to aid the residents who have seen their lives turn upside down.

“We will be here until this job is completed,” Bruno said.

Following the flooding, numerous agencies and groups have been working to aid residents, including the NYPD, the FDNY, and the Red Cross – which has been bringing water and other items to residents. Over a two day period, nearly 600 flood clean-up kits and relief supplies were distributed to residents in the affected area; more than 1,300 meals and snacks were provided to residents and emergency responders; and emergency housing was provided to eight families – 12 adults and seven children. 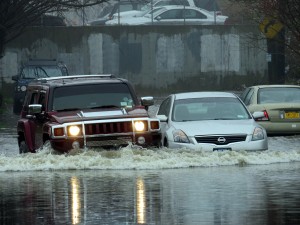 In addition to Noto, a number of residents said flooding has long been an issue in the area, and they expressed anger that the city did not more quickly address their concerns, particularly in the wake of Hurricane Sandy at the end of October 2012.

“This time, the flooding happened much more rapidly than Sandy – the sewer system is not working properly,” said Neil Iovino, whose home basement and garage was flooded Wednesday. “Our pump pumps 1,100 gallons of water an hour, and it couldn’t keep up,” Iovino added.

There is a capital sewer project in the works for Lindenwood, though elected officials said that may not begin until at least a year from now. According to an April 16 letter from the city Department of Environmental Protection to a Lindenwood resident, the DEP and the city Department of Transportation have included in the capital project HWK-1148, which covers areas along the South Queens-Brooklyn border, plans to reconstruct roadways and install storm sewers.

The city Department of Environmental Protection spent Thursday and Friday pumping water out of Lindenwood. Photo by Richard York

“Sandy should have been a call to action to invest in our aging sewer infrastructure and yet, families will have to suffer with more losses and another painful recovery,” Goldfeder said. “Once again, it took a major storm to demonstrate that our infrastructure is not prepared to deal with rising flood waters.”

Howard Beach-Lindenwood Civic President Joann Ariola agreed, saying “there is no alternative other than the capital project moving forward.”

“There’s no remedy acceptable besides a complete overhaul of the sewage infrastructure for that area of Lindenwood,” Ariola said. “We need to bring HWK-1148 to the front burner. We have for too long been putting a bandaid on this issue, and it has cost our residents nothing but money and loss of personal belongings, as well as damage to their homes.” 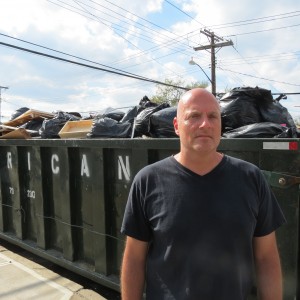 James Noto stands in front of the garbage bin containing many of the items that he and his family had to throw out after a flood destroyed their garage and basement in their Lindenwood home. Photo by Anna Gustafson

Addabbo  too is urging the city to begin the sewer project, though he said there likely will be no ground broken on the initiative for another year.

“DEP has to do something more immediate to relieve these constituents of their fear of any future rain,” Adabbo said.

“We all know something went wrong,” Addabbo continued. What are we going to do about it?”

A DEP spokesman stressed that the department is very aware of flooding issues in Queens and said the borough “is a very big priority for us.”

“We’ve got community outreach folks canvassing the neighborhood and providing residents with information about services available to them,” the spokesman said. “We’re distributing literature about ways you can protect your property when heavy rain is forecast.”

The spokesman also noted that of the $2.3 billion spent on sewer upgrades in the city over the past 10 years, $1 billion has gone to Queens.

Flooded streets remained a problem last Thursday, the day after the storm. Photo by Richard York

“DEP understands the hardship that area residents have suffered for years, and has been working closely with the Department of Design and Construction to resolve these problems,” DEP Director of Engineering James Garin wrote in the letter. “An assessment conducted by DEP and DDC revealed that there is a feasible alternative involving a new storm sewer outlet from the low-lying areas that will discharge into an existing tidal creek. This storm sewer routing will minimize the amount of grade raising required and offers a solution to a problem that was previously considered unsolvable.”

Whatever happens, residents said they need relief – and they need it quickly. 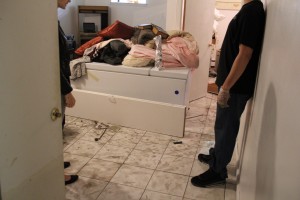 Nicholas Hedrick, who has lived in Lindenwood for 15 years, said sewer system in his neighborhood seems to have gotten worse in the last couple of years, with flooding becoming increasingly worse in the area.

“Something has to be done,” Hedrick said.”Our couch was floating. Everything was gone in the basement – clothes, toys, the TV.”

Sharon Lombardi, who owns a house in Lindenwood, said they had “never seen anything like this.”

“I think there’ll be a lot of houses up for sale after this,” Lombardi said.

A water-damaged photo dries on a Lindenwood yard. Photo by Anna Gustafson