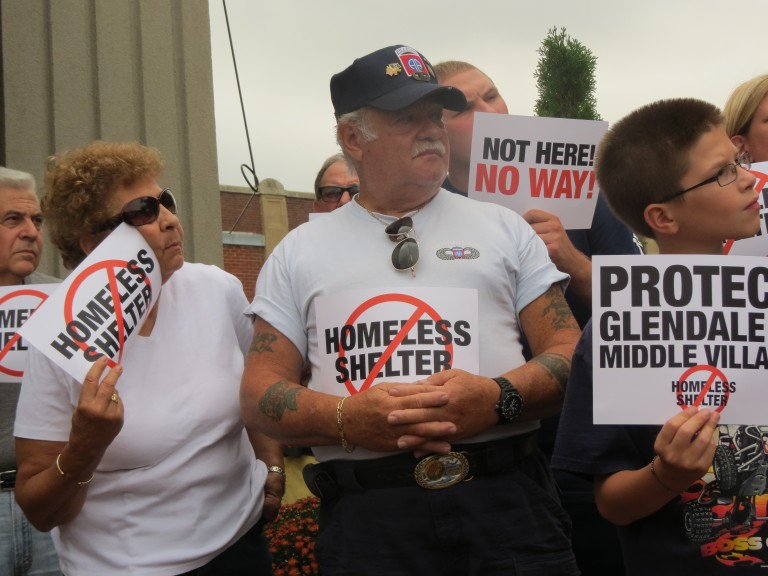 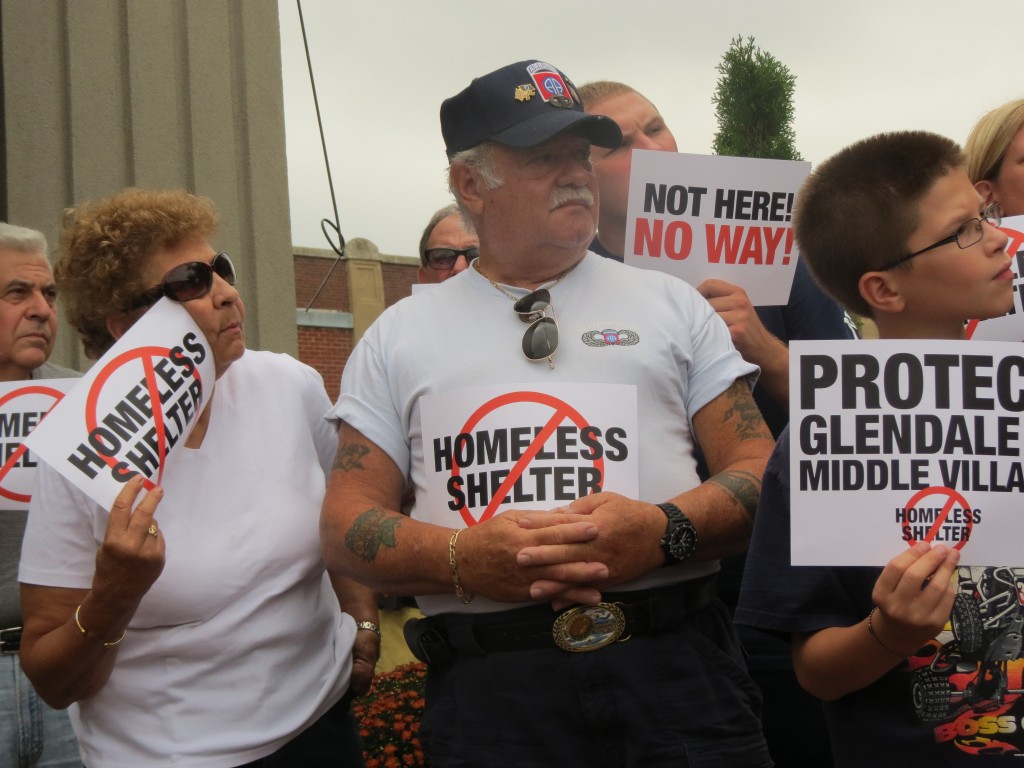 Residents and civic leaders gathered for a protest against the proposed homeless shelter last summer. Photo by Anna Gustafson

After much anticipation, a community meeting was finally scheduled so residents can air concerns over a potential homeless shelter plan in Glendale.

Mid-Queens residents and community leaders have been tapping their feet for months while waiting for a sit-down with the city Department of Homeless Services and Samaritan Village, the nonprofit company behind the 125-family shelter proposal. The groups agreed to meet May 22 at 7:30 p.m. inside Christ the King High School to discuss the $27 million proposal, but the results of such a gathering left much to the imagination.

“I don’t know what could possibly come out of this meeting. We should give them the opportunity to present and ask questions,” said Kathy Masi, president of the Glendale Civic Association, which has been widely opposed to the proposal. “There’s no way you could peg this to be an acceptable solution to homelessness.”

Like many members of Community Board 5 and the greater Glendale community, Masi argued that putting homeless people in the potential Glendale shelter would not be the best way to fight homelessness in the city. Elected officials and CB 5 leaders called on the DOH earlier this year to meet face-to-face with the community before moving forward on a plan to transform the vacant airplane factory at 78-16 Cooper Ave. into transitional housing.

Masi said she has heard mixed reviews when it comes from the area’s elected officials when asking about how likely it was to see the potential shelter be made into a reality. The response, she said, was leaving the Glendale community in limbo without any real way to anticipate their next move.

“No one knows what they are going to do there. We don’t even know if it’s going to be environmentally safe,” she said. “You get a lot of evasive responses from those involved. This meeting might move the conversation forward, but I don’t know what the end result is going to be.”

“While this movement is not indicative of the feasibility of this proposal, we believe that it is both appropriate and necessary to engage the community on this topic to obtain their input,” the letter read. “It is our belief that the Department of Homeless Services and Samaritan Village have a responsibility to remain accountable to the communities in which they propose to operate facilities.”

CB 5 District Manager Gary Giordano said there was still no timeframe as to when the EIS results would go public. The DHS did not respond to requests for comment. City Comptroller Scott Stringer will make the final call on the project.

Earlier Monday, Mayor Bill de Blasio rolled out a massive 10-year plan for affordable housing throughout the city, and Masi said the timing could not be any better to work in her community’s favor.

“Mayor de Blasio said he was committed to finding affordable housing and to build more units. That, to me, is a much better alternative,” she said. “We’ll prove how much clout our elected officials really have when this is all over.”