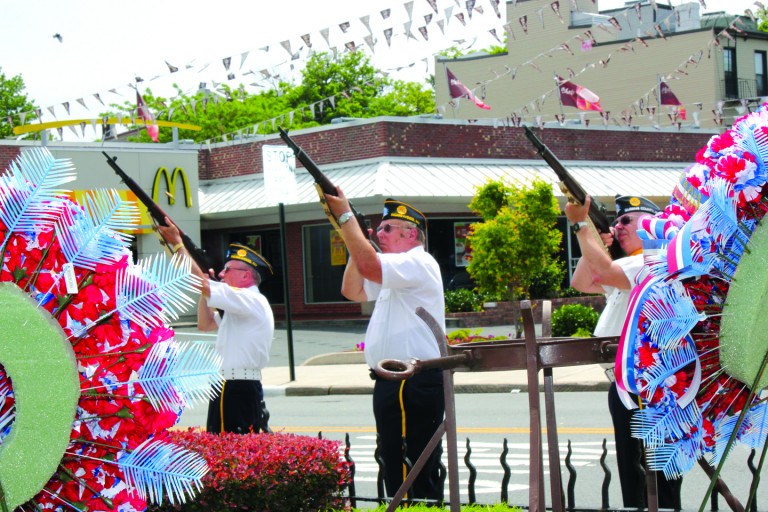 Queens will honor its fallen heroes in a number of Memorial Day parades. Pictured here was a previous Glendale-Ridgewood parade. File Photo

Thousands of people are expected to flock to Queens’ Memorial Day events this month to honor the heroic men and women who gave their all for their country.

Major Memorial Day parades were set for Forest Hills and Maspeth on May 25 and another in Glendale-Ridgewood the following day. Each event garnered its own special theme and list of honorees this year to remember those who served this country.

“We support all of the parades in this part of the borough,” said Jill Nicolois of Maspeth Federal Savings. “The people here take Memorial Day very seriously. It’s a big deal for all of us.”

The Forest Hills Memorial Day parade was slated for May 25th at noon along Metropolitan Avenue, starting at the American Legion Continental Post 1424 in the neighborhood. Grand marshals for that event included Our Lady of Mercy Msgr. John McGuirl, Community Board 6 Chairman Joseph Hennessy and Commissioner of the mayor’s Office of Veterans Affairs Terrance Holliday.

The parade runs through the afternoon and should wrap up around the same time another parade kicks off in Maspeth around 1 p.m. along Grand Avenue. Nicolois said parade organizers often worked in tandem with both the Forest Hills and Maspeth Memorial Day parades because of such a high demand for festivities on the special day.

“We just have so much participation – easily over 100 different groups doing their part,” she said. “The involvement is really something else. It’s just a very active veteran community. They’re always out there supporting each other.”

The Maspeth parade’s theme centered on honoring women in the military. Its grand marshals were announced to be Leonard Masone, chair of the Maspeth Kiwanis, and Karen Burke, who has worked with the United Veterans Organization for nearly 25 years.

Immediately following the Maspeth parade, the community will stop for a ceremony at the Veteran’s Square near Grand Avenue to honor Anthony Simone and Leo Wasilkowski for their service to the country, Nicolois said.

Simone, another native of Brooklyn, was drafted into the U.S. Army in January 1952 during the Korean War and received distinctions like the Korean Service Medal with two bronze service stars, a United Nations Service Medal and a National Defense Service Medal.

All three parades received support from Maspeth Federal Savings among several other community-oriented groups and veterans advocates, in part because Nicolois said the area was always supportive of worthy veterans’ causes.

“We all do what we can,” she said. “Everyone wants to step up and help defray some of the costs and make sure they have everything they need.”