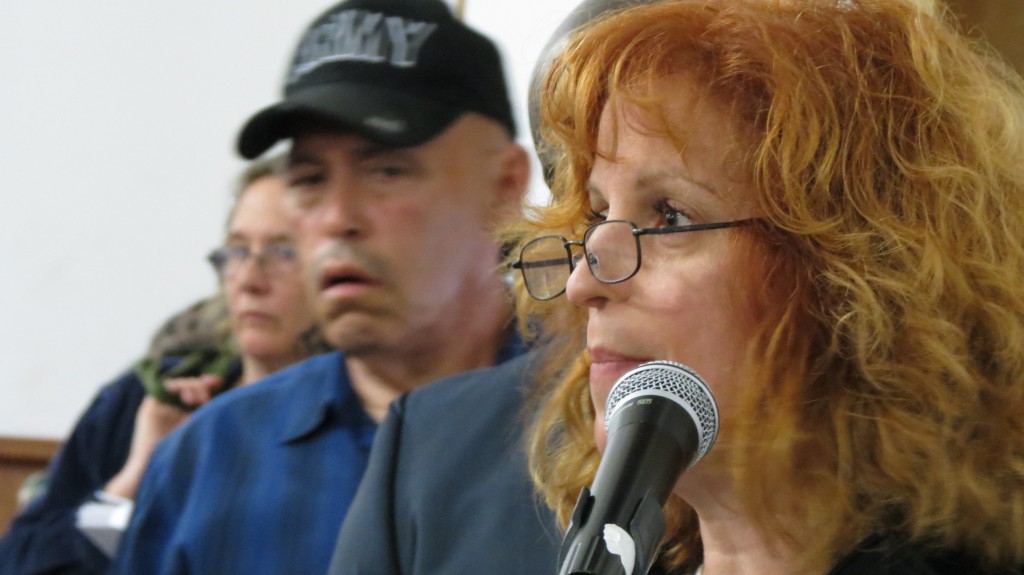 Broad Channel resident Sophia Vailakis-DeVirgilio testified at Comptroller Scott Stringer’s Build It Back hearing in Rockaway Tuesday night, saying she, her husband, and her young daughter still have not been able to return to their house that was destroyed during Sandy. Photo by Anna Gustafson

One by one, the residents who packed a Rockaway church for city Comptroller Scott Stringer’s hearing on Sandy spoke of the nightmares of the past 19 months: The destroyed homes, the mold oozing from walls, the never-ending battles with city agencies and insurance companies, the unemployment that has swept much of the area devastated by Sandy, the bankruptcy that so many are facing.

They spoke of a place called home that some still haven’t seen after Hurricane Sandy hit New York City at the end of October, 2012.

They spoke of the heartache and the sleepless nights and being strangled by red tape after Sandy took almost everything from them – and left them to face government agencies and insurance companies that they said seemed to do very little, if anything, to help them.

“My family is still not home,” Broad Channel resident Sophia Vailakis-DeVirgilio said at the two-hour hearing Stringer held at Mt. Carmel Baptist Church in Arverne Tuesday night. “It seems like they’re trying to push us out for other development to happen… We will not be moved.”

Hundreds of people attended this week’s hearing – which is one of a series of meetings Stringer is holding across neighborhoods devastated by Sandy to solicit community input on what his office should examine as it develops an integrated audit plan of issues surrounding the city’s response to Hurricane Sandy. He held meetings in Breezy Point and Coney Island, and the final gathering will be May 28 at the Olympia Activity Center on Staten Island.

A number of high-profile city officials attended the hearing, including Amy Peterson, who heads the Build It Back program.

In a place where nine people died and 30-foot waves pummeled the shore during Sandy, Stringer said Rockaway – as well as every neighborhood impacted by the storm – is, 19 months later, “taking a second hit.”

Stringer issued harsh criticism of the city’s Build It Back program, which was created by former Mayor Michael Bloomberg with the intent of helping storm victims rebuild homes, noting that from a pool of 20,000 applicants only two homes have been completely rebuilt.

“We’re going to use our audit power to get the results we need,” Stringer said in reference to securing help for the thousands of families left struggling in the wake of Sandy – many of whom have emptied bank accounts and taken out second mortgages to pay for the bills that never seem to stop coming after the storm. 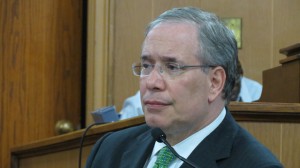 The comptroller, as well as some of those who spoke, stressed that while they lambasted Build It Back as a failure to date, they are holding out hope that Mayor Bill de Blasio will hold true to his word and come through on his promises for Sandy victims.

De Blasio announced last month that he was overhauling the city’s Sandy response program, including a vow to begin construction on at least 500 homes by the summer’s end and issue at least 500 reimbursement checks by the same time. Additionally, he said that residents, regardless of income, would be able to access financial help from Build It Back. Originally, individuals were being told they wouldn’t see aid for a long time, if ever, because they allegedly made too much – though many of them work solidly middle class jobs, including teachers or police officers.

Still, many of those who spoke at Stringer’s hearing, slammed Build It Back, detailing numerous frustrations with the program, from lost paperwork to the city using incorrect information about them to calculate what kind of financial help it can lend.

“Build It Back is an organization of unrelenting incompetence,” said Barbara Hillary, 83, of Far Rockaway.

Community Board 14 member Betty Leon said Build It Back lost her paperwork on three separate occasions – and “miraculously” located it after she called a BIB representative out on it during a community board meeting.

“The fourth time they told me they didn’t have my paperwork, I told them to go to you know where,” Leon said.

James Heyliger, president of the Association of Minority Enterprises of New York and a Rockaway resident, urged city officials to bring jobs back to the peninsula.

“How do we build Rockaway back? How do we put people to work?” Heyliger asked.

“Money went to consultants who asked us how to fix things up – and then disappeared,” he continued.