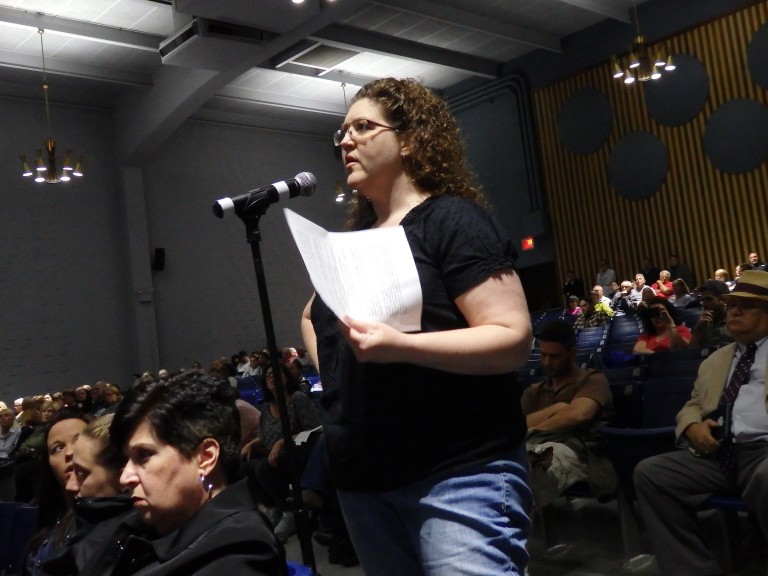 At last week’s hearing, Dawn Loreng Scala blasted the the plan to place a 125-family homeless shelter in Glendale. Photo by Phil Corso

The message was loud and clear: Glendale does not want a homeless shelter in its backyard.

Civic leaders, elected officials and residents packed the auditorium at Christ the King in Middle Village last Thursday night for a face-to-face chat with the Department of Homeless Services and Samaritan Village – the two groups primarily behind the $27 million plan to build a 125-family shelter in a former airplane warehouse at 78-16 Cooper Ave. Representatives from both parties said their pieces before hearing from the public, which bashed the proposal.

The rules were strict as the hearing commenced, with Community Board 5 Chairman Vincent Arcuri warning the rowdy room to only present questions or concerns that will then be brought back to the DHS for later consideration. The board has been opposed to the plan for over a year now, and several members said they were shocked to see it even making it this far.

Dawn Loreng Scala led off the evening, arguing the property beneath the proposed shelter was not safe enough to house homeless families. She said the decisions should be put on pause until a proper environmental study of the site was finished.

“This site will require extensive renovation and cleanup of possible toxins,” she said. “Who is paying for that renovation? It is my understanding that the renovations are not included in this $27 million contract.”

Patricia Grayson, a member of the mid-Queens Community Board 5, asked the DHS and Samaritan Village for clarification in regards to the money trail, speculating the homeless shelter plan would ultimately cost the taxpayers money. She also called on how a shelter might affect education throughout the community,

Lisa Black, assistant commissioner of government and human relations with the DHS, outlined the city’s homeless shelter strategy while detailing exactly how the potential Glendale site would be used. This site, she said, would house families with children in order to supplement the more than 1,000 homeless families in need of shelter borough wide.

Doug Apple, executive vice president of Samaritan Village, provided his defense of the shelter proposal by reassuring residents they would not pose any risks to the surrounding community. He said Samaritan would help establish a community advisory board, just as it does at other sites throughout the city, to ensure all voices are heard.

Samaritan has already assured the community the potential site would have its own security team and 24-hour safety plan. Apple said more than 35 staff members, including the security workers, would enforce a strict 10 p.m. curfew for clients.

“We would be and want to be a good neighbor to you,” he said. “We really do understand the concerns.”

State Sen. Joe Addabbo, Jr. (D-Howard Beach) grabbed the microphone at one point to speak on behalf of his constituents and urged all involved to ensure there is still dialogue as the proposal is considered. He presented his top-three concerns, including inadequate transportation around the property, potential toxins beneath the site and the building footprint being too small to accommodate 125 families.

“We need to open the door for more dialogue,” Addabbo said. “Dialogue is critical. Not just today. Today only opens the door. My residents’ concerns need to be heard each and every day.”

The senator’s remarks had the auditorium erupting in applause.

City Councilwoman Elizabeth Crowley (D-Maspeth) and state Assemblyman Mike Miller (D-Woodhaven) were among the other elected officials to take the mic and all voiced strong opposition to the plan.