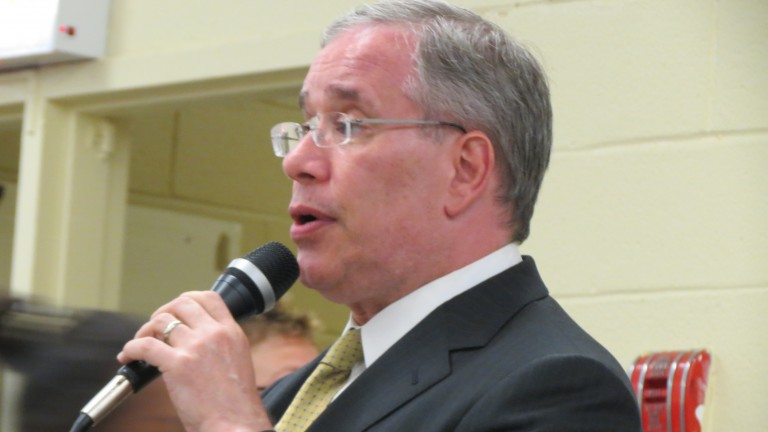 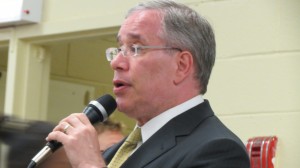 City Comptroller Scott Stringer spoke to a room jam-packed with hundreds of residents irate over flood issues that have long plagued their neighborhood – and promised his office would help them. Photo by Anna Gustafson

In one hand, Tommy Durante held almost all that is left of his most prized possessions.

“Mickey Mantle? In the garbage,” Durante said, pointing to a photo on his phone of one of his thousands of baseball cards, a collection he has for decades been cultivating and which was completely wiped out during an April flood that devastated hundreds of homes throughout Lindenwood. “I lost probably 100,000 baseball cards, 15,000 comics. Whitey Ford autographs, a Lou Gehrig watch, an irreplaceable photo of my grandfather- all gone.”

One of hundreds of people who crowded into St. Helen’s Tuesday evening for the Howard Beach-Lindenwood Civic Association meeting, Durante said what many echoed throughout the night: The city must step up to help the residents who lost nearly everything in an April 30 storm that left hundreds of homeowners in Lindenwood reeling. For many, they said the flooding that ensued as five inches of rain cascaded down upon them during the April event was far worse than what they sustained during Hurricane Sandy, with some being forced from their houses and nearly everyone impacted to face damages totaling thousands upon thousands of dollars.

Following the storm, the city Department of Environmental Protection admitted that the flooding that wreaked havoc on residents’ basements and garages was caused by a malfunctioning sewer facility in Spring Creek. Up until 90 days from the storm, residents will have a chance to file claims with the office of City Comptroller Scott Stringer – who attended Tuesday’s meeting and vowed to help the struggling homeowners.

“We’re going to do everything we can to get you the money you deserve,” Stringer said in front of a crowd of more than 500 people.

Once the city DEP submits its report on the flooding to the comptroller’s office, which is expected to happen this week, Stringer said they will be able to send engineers to Lindenwood residents’ homes to assess the damage and determine the kind of financial compensation individuals will be able to land from the city.

“I don’t want this to be a Build It Back situation,” Stringer said, referring to the city program that was set up by former Mayor Michael Bloomberg to help residents following Hurricane Sandy – but which Stringer called at the meeting “a virtual scandal.”

While the city DEP was expected to send a high-level representative to the civic meeting, no one from the department showed up Tuesday evening.

“Their lack of representation spoke volumes,” said Howard Beach Lindenwood Civic President Joann Ariola. “This would be the second time they let this community down – first by leaving the command center unmanned, causing houses to be destroyed and people to be displaced, and then by not attending a meeting, which they were committed to, that was attended by more than 500 people waiting for answers.”

“I want to give kudos to the residents for coming out in force and realizing there’s strength in numbers,” Ariola continued. “They did not come out in vain – although DEP did not attend the meeting, their concerns were heard by the elected officials who represent us. We’ve received commitments from each and every one of them to make sure that the community gets compensated for their loss.”

A DEP spokesman said that due to a scheduling error, the department did not have a representative at the civic. The spokesman said they have since reached out to the elected officials to apologize and to let them know that they will make someone available to speak to the community at the earliest opportunity.