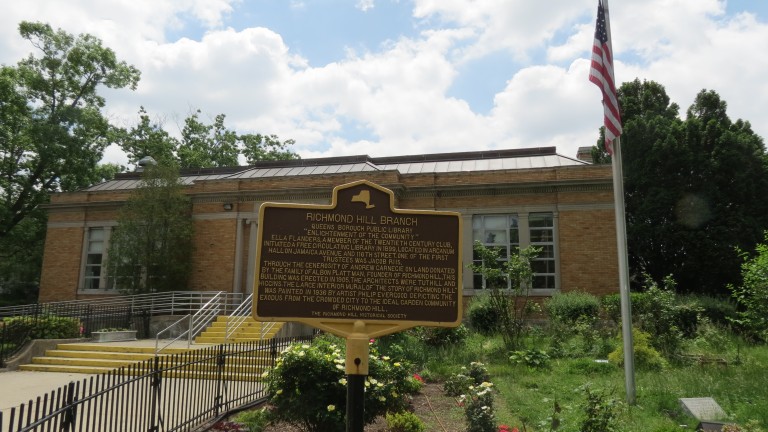 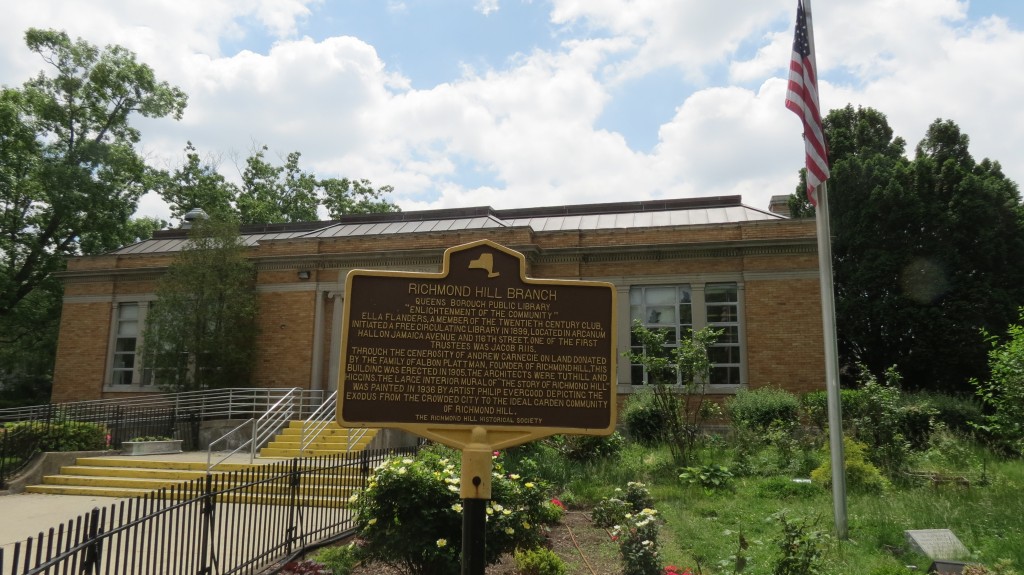 Built with funds from the philanthropist Andrew Carnegie, the Richmond Hill Library opened in 1905 and has since played an integral role in the surrounding community. Photo by Anna Gustafson

Members of the Friends of the Richmond Hill Library can see it now: A basement rid of what is now a sea of lawn mowers, cardboard boxes brimming with cleaning solution, and hefty bags of garden soil and transformed into a cultural and educational center that could cater to the incredibly diverse population that is increasingly turning to the library for help: Immigrants, students, the unemployed, and everyone in between.

“When you think about what the community need and you see all the unused space down there, it’s devastating,” Friends of the Richmond Hill Library board member Deborah Emin said in reference to the facility’s expansive basement.

While the basement covers a vast amount of space, the library currently can only use one room for events – and that space could be taken this coming school year if the city decides to use it for its expanded universal pre-kindergarten program. The rest of the basement is currently used as a facilities depot for the entire Queens library system – which translates into the space being a seemingly haphazard collection of everything from lawnmowers to rubber hoses.

Joanne King, a representative for the Queens Library, said the library has submitted to the city a plan to renovate the Richmond Hill site’s basement.

“The lower level renovation project is proceeding, but quality work takes time,” King said in an email. “If everything goes optimally, construction will start in the second half of 2015 at the very earliest.”

Such a renovation is, Friends group members said, desperately needed for a community that is turning out in droves to visit the Richmond Hill library – but which they said is lacking when it comes to facilities and resources. 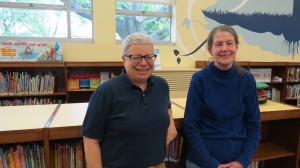 Friends of the Richmond Hill Library board members Deborah Emin, left, and Linda Meeth stand before one of the windows in the children’s section that will soon boast a garden. Photo by Anna Gustafson

“We need this library to be open on Sunday, we need the wi-fi upgraded, we have the oldest computers – our software doesn’t support Yahoo mail, we have laptops that don’t work,” Emin said of the facility that was built with funding from philanthropist Andrew Carnegie and which opened at its current location, 118-14 Hillside Ave., in 1905, when Richmond Hill was still considered an oasis of green, a far cry from the smog of Manhattan.

Questions also surround funding for the renovation work. The New York Daily News reported on April 28 that the city Department of Design and Construction – the agency that must greenlight the renovation project – froze more than $20 million in project funding for the Queens Library because of scrutiny over spending overseen by Library CEO Thomas Galante. About $4.4 million of that, according to the Daily News, was for the Richmond Hill library – but King said that was inaccurate and stressed the DDC has not frozen their project funding.

The DDC did not respond to a Freedom of Information Act request regarding the funding.

While it will be some time before Richmond Hill’s renovated basement will be unveiled, the library continues to grow its programming – including offering a new literary series over the past year – and members of the Friends of Richmond Hill Library have successfully been fundraising to fill the significant financial hole left by the city, which slashed Richmond Hill’s budget from $40,000 last year to $7,000 this year.

Recently, the library partnered with a nearby Key Food to raise about $15,000 for its book budget, and it has also landed hundreds of dollars more thanks to donations and other fundraising efforts.

Last month, the library received the Citizens Committee of New York City Grant for its “Grow Greener Food” project, for which the facility landed $2,000 to create window gardens and buy accompanying literature about gardening.

“They’ve done a terrific job with their fundraising,” King said.

Additionally, King said the library is poised to celebrate an “open spaces program” at the Richmond Hill facility – which means a revamping of the spot’s outside area, from adding wi-fi to furniture so people can use the site as a reading garden.

Or, of course, those interested in getting involved can, Emin stressed, “come to our libary and spend time there.”

“If you want to help the library – come there right after school when all the kids show up; you’ll see how completely involved everybody is,” she continued. “The computers are completely tied up. You’ll see the line out the door with people waiting so they can check out books. You’ll see we need more hours, more staff, more technology.”