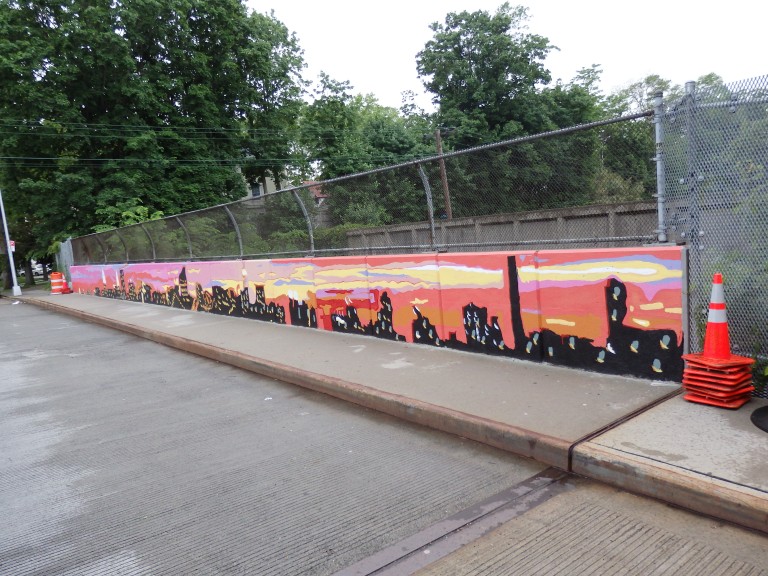 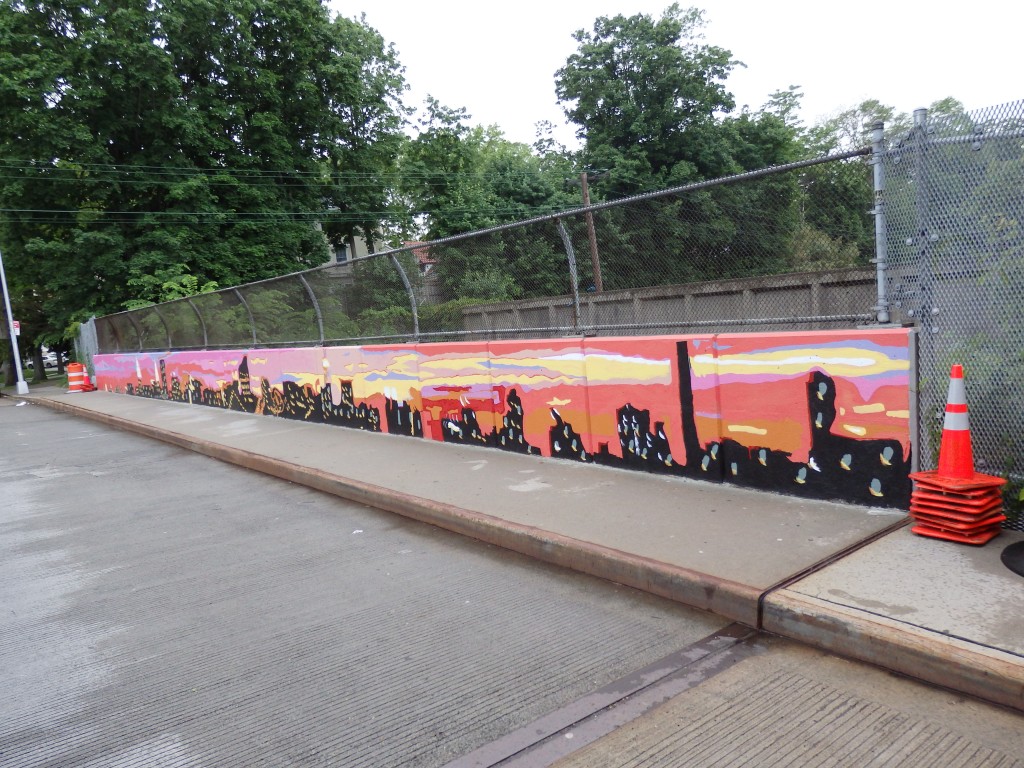 A Kew Gardens overpass now boasts a new mural, which is meant to show Kew Gardens as a transition point between the towering buildings of the city and the open air of Long Island. Photo by Phil Corso

A Kew Gardens overpass has been given a makeover.

One nearby artist took the lead while dozens of neighbors followed in repainting the 82nd Avenue overpass between Austin and Grenfell streets into a sprawling display of the city and Long Island landscape. Kew Gardens resident John Chadwell said it was a welcome sight to see so many people taking ownership of the community and fighting graffiti.

Chadwell, who helped design the murals, said he wanted to evoke Kew Gardens as a transition point between the towering buildings of New York City and the open air of eastern Long Island. The end product, which was finished over the weekend, showed a city skyline on one end and the Montauk shoreline and Orient Point Lighthouse on the other.

“We designed this in such a way that anybody could have stepped in to paint at any point,” he said. “People made some new friends and helped clean it up.”

The entire concept was born when Kew Gardens natives Carol Lacks and Rosemary Sherman were walking along the Long Island Rail Road overpass bridge about a year ago. Lacks said the two had noticed there was always some sort of graffiti along the bridge, and the two decided they no longer wanted their community to fall victim to vandals.

Lacks and Sherman knew of Chadwell’s work because they were also neighbors of his, he said.

“They had been over my house and seen the paintings all over my apartment,” he said. “We talked a lot about graffiti there and at other places in the community as well. They did all the heavy lifting with the city to get that going. I provided the design.”

Sherman used her pull with the Kew Gardens Council for Recreation and the Arts to work alongside the city Department of Transportation’s Community Commissions program to organize the artwork and find the funding for supplies up to $5,000. The city project helped move things along by encouraging artwork that was specific to the area.

The city approved the design back in March and set the budgeting process into motion.

It took about 40 volunteers over a few days and Chadwell said he was glad to see his neighbors show such an interest in the work. That way, he said, there will be more eyes on the bridge and a more united front against graffiti tags.

“Most of the people were from neighborhood or friends of mine,” Chadwell said. “It was very nice to have such a broad range of people interesting in making it nicer. Most of the people didn’t even know each other at first.”

As for the future, Chadwell said a lot of residents expressed worry over the fate of the mural. But each time, he said, he was quick to shoot those worries down.

“I don’t think it’s going to be that big of an issue. Graffiti guys who are tagging are looking for voids to fill and if there is something there, they are less likely to tag it,” he said. “There were over 40 people there. That’s plenty of eyes. If it gets defaced, I will go and resolve the problem.”