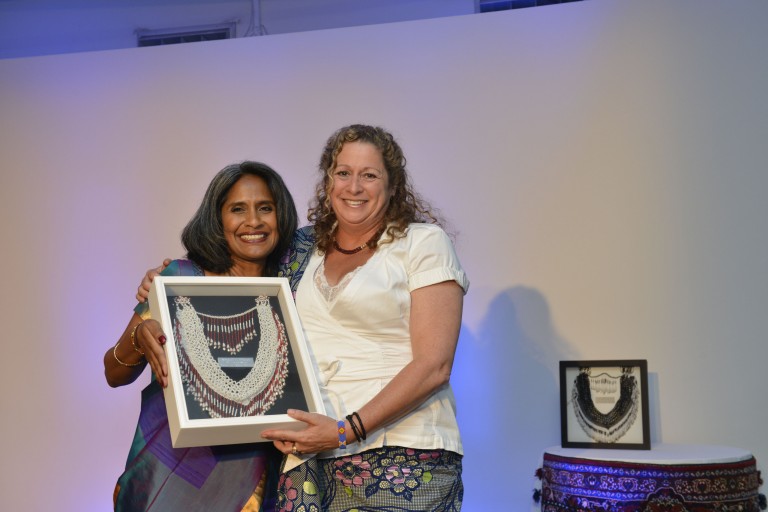 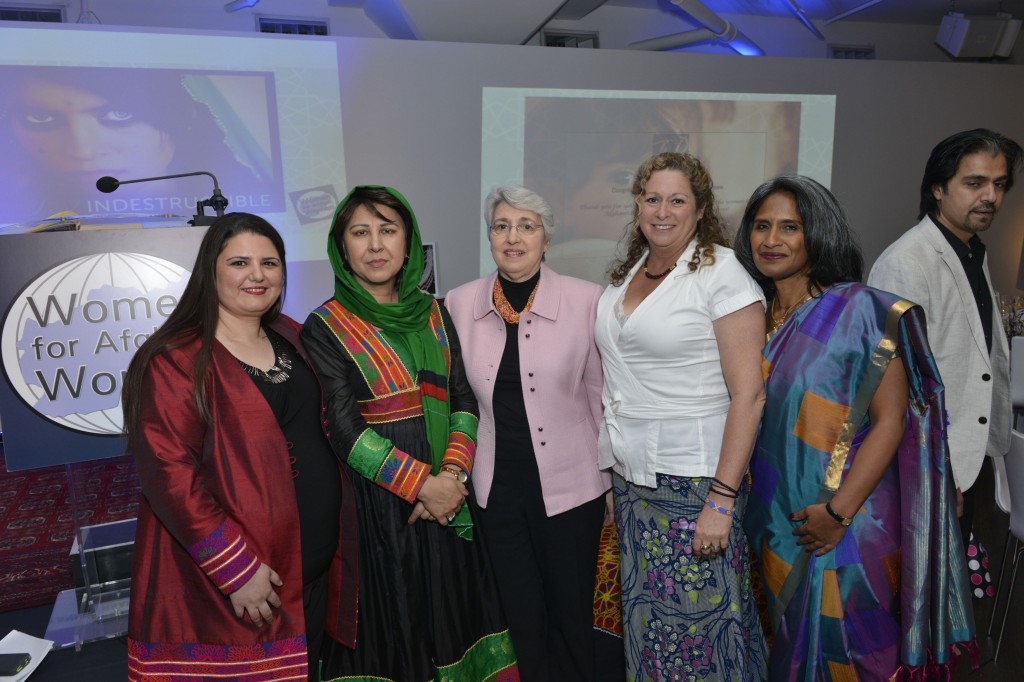 Gala Co-Chairwoman and President of the Feminist Majority Foundation Eleanor Smeal, center, one of the first American leaders to bring attention to the plight of Afghan women under the Taliban in the late 1990s, joins WAW Executive Director Manizha Naderia, left to right, honorees Shinkai Karokhail and Abigail Disney, and WAW board member Sunita Viswanath. Photo courtesy Women for Afghan Women

It has been 13 years since the Queens-based Women for Afghan Women started helping individuals throughout New York and Afghanistan, and organizers reflected on their progress at the group’s annual gala in Manhattan last week.

Members and supporters packed a dining hall in Tribeca last Thursday night commemorating the anniversary while honoring some of the group’s most vocal champions. WAW Executive Director Manizha Naderi delivered an address there and told stories about the recent elections in Afghanistan and how they served as a milestone for advancement in the region.

Naderi criticized U.S. President Barack Obama’s intentions to pull troops out of Afghanistan at a time when the country is most vulnerable as it takes steps towards democracy, but praised WAW programming for helping bring the women there to the forefront of the transition.

“Some people in the United States think Afghanistan is a lost cause, but these elections prove there are better days ahead,” Naderi said. “Afghanistan is in transition today.”

In her address, Naderi spoke about Women for Afghan Women’s four new centers established in Afghanistan, as well as a new advocacy center built in Washington D.C. that have helped serve more than 3,000 clients in the past year alone. She asked the crowded room for their support in the years ahead with hopes of continuing the fight to educate people of human rights abuses in the region.

Women for Afghan Women started in April 2001 as a small service-oriented group assisting Afghani women in Fresh Meadows, but since expanded to 28 facilities in 10 provinces of Afghanistan and a community center in New York. The Queens center, which draws support from throughout the borough, serves as a base for legal support, educational programming, and advocacy.

Other speakers at the gala included women activists Shinkai Karokhail and Abigail Disney, who were honored with Malalai Kakar Human Rights Award and Legacy Award respectively. Karokhail co-founded the Afghan Women’s Education Center and helped build a strong and united Afghan women’s movement, while Disney was celebrated for her role in creating documentaries on the role of women in war in Afghanistan.

Eleanor Smeal, another activist, kicked off the event by underscoring the importance of celebrating the work of leaders like Karokhail and Disney. She said it was a sign of hope that more than 60 percent of all Afghan citizens turned out to vote in the country’s most recent elections this year – and even more promising that 40 percent were women. 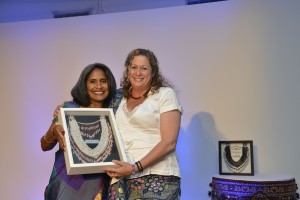 “Tonight, we are saluting the young people. They are the hope for the future,” she said. “We cannot waiver in that commitment to afghan women.”

Sunita Viswanath, board chair for WAW, introduced video testimonies of some women the group has helped and saved over the years, telling stories of women being forced into marriages and threatened with death for not obeying.

“There is no underestimating the power of the youth of Afghanistan,” said Viswanath, who is also a familiar name in South Queens for her work to help clean up Jamaica Bay.

Before the honorees hit the stage, Antiques Roadshow host Nicholas Dawes helped lead a live auction to raise money for the organization. He sold items like four tickets to The Daily Show with Jon Stewart for more than $3,000.

“We owe these girls. The world owes them a debt. You owe them too,” he said before starting the auction. “All of you tonight have thousands of Afghan daughters tonight. This is your opportunity to pay them that debt.”