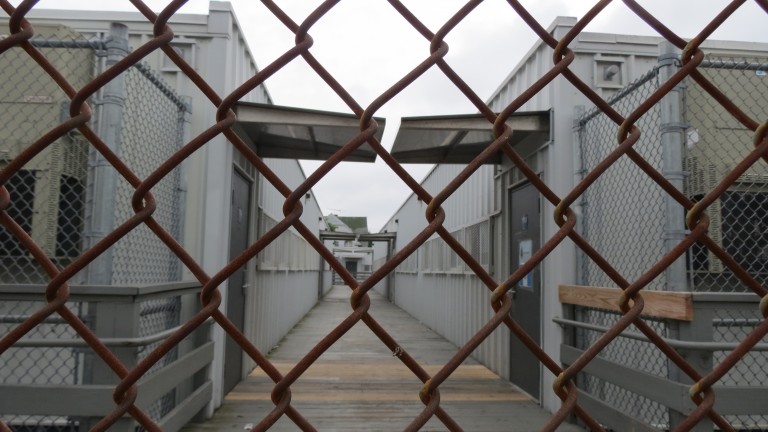 The city has said it plans to eliminate all of the 22 trailers at Richmond Hill High School. Students and educators have long lambasted the trailers, calling them health hazards and a poor learning environment. Photo by Anna Gustafson

Standing in the cavernous auditorium of Richmond Hill High School last Thursday, parents, educators, and students echoed a message to the city that they have sounded time and again: Do not limit the more than 100-year-old institution’s access to an annex that they said has helped to significantly cut down on overcrowding and has attributed to an all-around better academic environment.

The city Department of Education has proposed to move about 200 of the 400 students in the Richmond Hill High School’s annex, which this year housed the school’s freshmen population, to the facility’s main building in order to make room for a new public high school, Epic High School North. 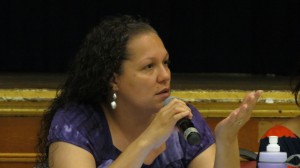 Richmond Hill High School Parent Teacher Association Co-President Cheryl Rose slammed the city over its plans to move students from the annex to the main building. Photo by Anna Gustafson

“How will they fit safely and comfortably in our main building?” Cheryl Rose, co-president of the school’s Parent Teacher Association, asked at Thursday’s hearing in reference to the influx of about 200 students next school year. “The answer is they will not.”

Rose was one of a number of parent leaders who slammed the city for its plan at Thursday’s hearing, which the city DOE was required to hold before the city Panel for Educational Policy votes on the proposal at its June 24 meeting. The meeting is scheduled to begin at 6 p.m. at the Taft Educational Campus in the Bronx.

“Why are they taking this vote in the Bronx at 6 p.m. when our parents are here?” Rose continued. “Is the DOE really listening?”

Originally, the city had proposed to move all of the 400-plus students from the annex, which opened to alleviate the significant overcrowding in the school, to the main building, located at 89-30 114 St., for the 2014-15 school year. However, after months of protests from parents, elected officials, and educational leaders, the DOE recently revised its plans and announced it would allow about half of the 400 pupils to remain in the annex, situated a couple blocks from the main building at 94-25 117th St.

Still, parents and educators said the revised plan does not meet the school’s needs and could lead to Richmond Hill High School having to implement multiple schedules – meaning students would be phased in throughout the day in order to alleviate overcrowded classrooms. 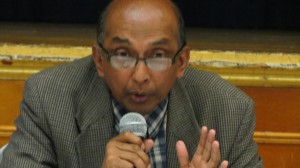 “We have experimented before with multiple schedule, and we know the detriment of multiple schedule,” said Vishnu Mahadeo, president of the school’s Parent Teacher Association. “We can’t go back. We know it’s a failed experiment, and it doesn’t work in Richmond Hill.”

Mahadeo noted that when the school employed multiple schedules, the graduation rate dipped below 50 percent, and Shelliann Williams, a guidance counselor, said that multiple schedules resulted in students not being able to participate in sports or other after-school activities because the space was being used for academic purposes.

And, should multiple schedules once again be implemented, “the main building will have the quality of its curriculum downgraded,” in the sense that students will not fare as well academically when faced with increasingly overcrowded rooms, student John Rainone said.

As part of the city’s recently revised plan, the DOE has also said it plans to eliminate the 22 trailers at the school by the 2016-17 school year. Again, parents and educators said they definitely welcome the removal of the trailers – but they said they have no idea how the city plans to accommodate all those students in the main building.

Additionally, parents said they have received conflicting information as to whether or not students will be in “transitional classroom units” – DOE speak for trailers – next year. They said they have been told both that only administrators would be in the trailers, as well as that students will continue to go to class in them.

“I’m hearing we will have students in the [trailers], and this is unacceptable,” Mahadeo said. “…DOE is trying to get us all confused. Will we have children in [trailers]? We need a clear yes or no on that.”

According to information provided by the DOE when The Forum inquired about this, the department said trailers will not be used for core construction in the 2014-15 school year, or going forward. The DOE said while a small number of trailers will remain at the school for the next two school years, they will be used primarily for administrative purposes and that every trailer will be removed by 2016.

Last year, the city PEP voted in favor of the DOE’s proposal to open a new high school in the annex, which city officials contended would result in smaller class sizes at Richmond Hill HS because the new school would draw students from Richmond Hill. The annex would entirely by used by Epic High School North by the 2015-16 school year.

The DOE said that by the 2017-18 school year, enrollment at Richmond Hill HS would decrease by approximately 420 to 460 students, leaving the school’s population at around 1,560 to 1,610 students in ninth through 12th grades.

The decrease, according to the city, will stem from both Epic High School North and another high school slated to open, Epic High School South, drawing students. Together, the two new high schools will offer between 600 to 680 seats once they reach full grade span in the 2017-18 school year, the DOE said.

But educators and parents alike expressed doubt about the city being able to address the overcrowding at Richmond Hill HS in the timeframe the department has given, particularly with the partial closing of the annex.

“This policy stinks,” said Ari Steinfeld, a special education teacher at Richmond Hill. “It stinks because you’re bringing us back to a situation that was untenable.”