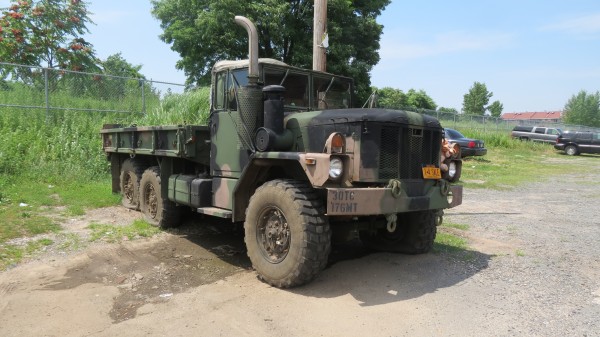 A camouflage-colored military truck remains idle in a parking space on 78th Street in Howard Beach. Photo by Ashley Helms

A large, camouflage military truck has been sitting vacant on 78th Street in Howard Beach for the past several months, leading residents to question why authorities have not stepped in to move it.

Joseph C. Thompson, president of the not-for-profit Civilian Observation Patrol in Howard Beach, said he is aware of the truck’s presence in the neighborhood and believes it was used to transport homeowners to safer ground during Hurricane Sandy. As for making a complaint, Thompson suggested that residents call the police or 311, but said as long as a vehicle has a valid license plate and registration, it can be parked idly without a problem unless alternate side parking rules are in effect for the area.

“If it doesn’t have plates, you have to call the police precinct or 311 to see if they can make a summons,” he said. “If there are enough summonses, the vehicle could be towed. Maybe [the owner] doesn’t have any place to park such a big vehicle.”

The community affairs department of the 106th Precinct did not return calls seeking comment and the owner of the truck could not be identified by press time.

Some residents reported the truck to The Forum Newsgroup as a community eyesore and waste of parking space, but it apparently has not caught the ire of all the residents.

Standing in front of his home on 79th Street, Anthony Sirico, 37, said he has been seeing the truck for years driven by a man who he thinks lives in the neighborhood, but noticed that it hasn’t moved from its parking space in at least three months. Though he said the truck isn’t a nuisance to him, Sirico acknowledged that parking is often hard to come by in his neighborhood.

“I don’t know why it’s an issue,” he said. “It’s in a parking spot and there is a lot more going on. The neighborhood is overdeveloped, so it’s hard to find parking. At night, it’s packed.”

Anthony DiSalavo, 50, also lives nearby and said there were barely any parking spaces left on the surrounding streets on weekdays after 7 p.m. He said he has yet to see the police come by to look at the vehicle despite it sitting there idly for months.

“The police don’t come and check? Aren’t they supposed to check it out if people complain?” DiSalavo said.

Anthony Pirrore, 42, admitted the truck did not bother him, even though parking can be tough in the neighborhood. Some residents just like to make a fuss about small issues, he said.

“There’s no alternate side parking, so we can park wherever we want,” Pirrore said. “People have nothing better to do than complain.”