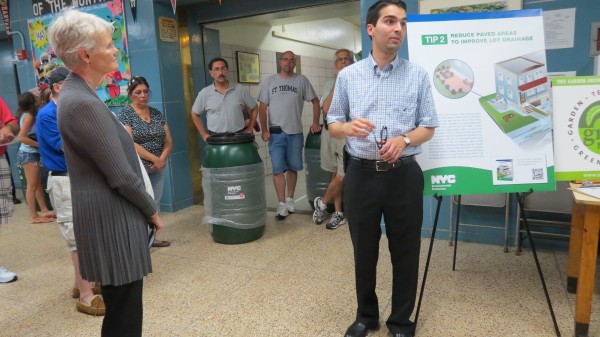 City Councilman Eric Ulrich (R-Howard Beach) speaks to residents in attendance at the flood prevention workshop on July 9. The city Department of Environmental Protection along with the Howard Beach-Lindenwood Homeowners Association hosted the event in order to help residents more effectively flood-proof their homes. Photo by Ashley Helms

Howard Beach resident Joseph Annicaro said he was frustrated by the state of his home after devastating floods left it in disrepair. Annicaro, 50, said he had to redo his entire basement after Hurricane Sandy as well as the torrential downpour on April 30 that dumped more than five inches of water, setting him back nearly $40,000.

“I had to redo the while basement again. Get a new washer and dryer, a new stove, new boiler and refrigerator,” Annicaro said. “We want to be compensated. Who can afford this?”

The city Department of Environmental Protection, along with the Howard Beach-Lindenwood Civic Association, hosted a flood prevention meeting at the Walter Ward School on July 9, where residents were encouraged to learn how to more effectively flood-proof their homes. DEP representatives were on hand to answer questions and address concerns about a system malfunction at Spring Creek that was discovered to have exacerbated the flooding.

According to a statement on the DEP website, the agency discovered in May that an electrical system error at Spring Creek caused water to not be released into Jamaica Bay at the right time, causing a mixture of rainwater and wastewater to back up into Lindenwood streets and flood nearby homes. Spring Creek can hold 20 million gallons of rainwater and is where excess water gets redirected when the 26th Ward and the Jamaica Wastewater treatment plants exceed their holding capacities, the agency said.

Rain barrels were also available free of charge for anyone who thought they might need them. But like Annicaro, some residents could be overheard expressing frustration at the repeated flooding events that have caused severe damage to their homes.

“People are here looking forward to [Stringer’s] final report as well as rain barrels and information,” Ariola said. “This is step one, but there will be final steps to alleviate the problem.”

City Councilman Eric Ulrich (R-Ozone Park), said educating residents on how to make their homes more resilient is the most positive and productive way to deal with the fallout of the latest storm. The city is going to do whatever it can to prevent flooding and encouraged attendees to go table to table collecting tips on how to strengthen their homes, Ulrich said.

“We’re making sure people living in flood prone areas could get some relief, get some help, and that something could be done to help them prevent the type of damage that has been happening on some blocks for many years,” Ulrich said.

The DEP distributed a brochure outlining six tips that homeowners can take to prepare their homes for big storms. Some of the tips include reducing paved areas and setting up sand bag barriers for sloped driveways and basement doors.