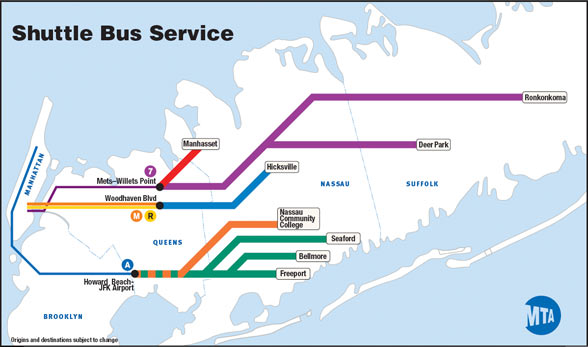 An official MTA contingency plan is in place if LIRR unions decide to strike this weekend. Photo courtesy MTA

A falling out between Long Island Rail Road unions and the Metropolitan Transportation Authority dominated the news cycle this week as riders prepared for what could be a devastating strike for commuters throughout the city.

MTA Chairman Thomas Prendergast said labor negotiations “collapsed” on Monday, but the agency and LIRR unions agreed to go back to the bargaining table on Wednesday with hopes of reaching a solution before Sunday’s strike date.

“As Governor [Andrew] Cuomo said, a strike would disrupt families and business across the New York metropolitan region, and the only way to prevent a strike is for both sides to negotiate a fair and reasonable settlement at the bargaining table,” the MTA said in a statement on Wednesday. “We have asked the LIRR unions to resume negotiations immediately.”

The agreement to reignite contract talks came on the same day that MTA advertisements hit the airwaves outlining its latest rejected offer, which included 17 percent raises to the union employees threatening to strike.

Anthony Simon of the LIRR unions said in a letter that MTA officials were not cooperating behind closed doors and threatened to begin winding down on service as early as Wednesday in anticipation of a Sunday strike.

“The MTA has clearly decided that provoking a strike is the course of action it intends to pursue,” he said Monday.

If a strike does occur, the MTA released a contingency plan that included 350 shuttle buses that would handle 15,000 riders from eight different spots in Long Island and three Queens subway stations during rush hours. The agency said it would open 4,000 parking spaces at Citi Field to help get to the No. 7 train there as well as an additional 3,000 parking spots at Aqueduct Raceway to help access the A train.

Mayor Bill de Blasio said he was a bit more optimistic as long as both parties agreed to keep negotiating. He said straphangers would not be slapped with a big hit because of July being a somewhat slower month.

“It is simply unfair for my constituents and everyone traveling both east and west into and out of the borough to be inconvenienced because parties could not come to an agreement,” Addabbo said. “In order for our LIRR workers to safely transport our constituents, we as a community need to look out for the workers.”