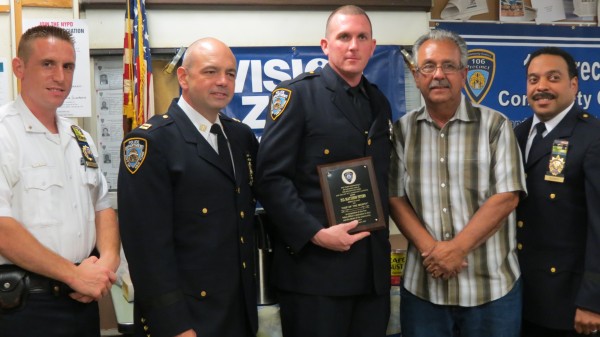 Good deeds do not go unrewarded at the 106th Precinct.

Officer Matthew Peters was presented with the June cop of the month award during a crowded 106th Precinct community council meeting on July 9 for swiftly catching a robber and returning an elderly victim’s stolen bags to her.

Peters, 34, was one of two officers sent out to look for an alleged perpetrator after they heard a 65-year-old woman had been robbed. While canvassing, Peters said he saw a man fitting the robber’s description darting into a 7-11 convenience store.

While the man was inside, Peters waited in the patrol car outside of the 7-11 so a potentially dangerous altercation would not ensue inside the store.

A passerby then approached the police car and told the officers they saw someone dumping two bags of items behind a parked car. Peters said he knew he most likely had found the man that robbed the elderly woman because he was spotted trying to dispose of two bags.

The cops then approached the suspect as he left t he 7-11 and found he had about $100 worth of the woman’s jewelry, $30 in cash and the bags containing clothing and medicine that were stolen from her.

“He was cooperative,” Peters said of the search. “He kept apologizing to the woman.”

The officers also found a water gun the suspect allegedly painted black so he could scare the elderly woman. The woman positively identified the perpetrator and police later discovered that he had prior arrests for arson, assault and forcible touching.

“The arrest I made might have closed a pattern.” Peters said. “He might do it again or has in the past.”

Deputy Inspector Jeffrey Schiff, presenting the award to Peters, commended the officer for his dedication to duty and to the community. The deputy inspector is allowing Peters to take one paid day off from work, referred to as “commander’s day,” for officers who receive a cop of the month award.

It was Peters’ third time receiving the cop of the month award. He was also honored in 2006 for his work on a robbery and again in 2010 for arresting four people for illegal gun possession.