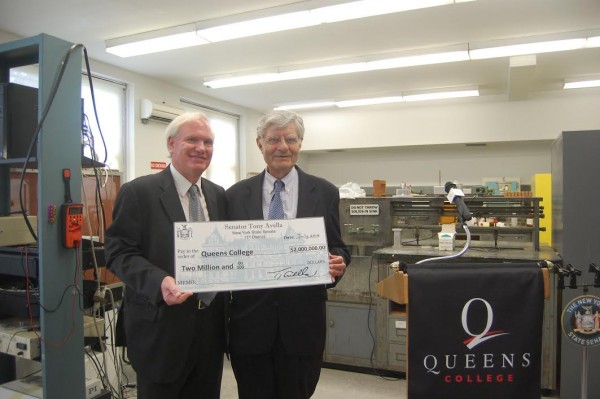 In order to renovate one of its science research and teaching laboratory, Queens College was awarded a $2 million grant on July 18 for the renovations. State Senator Tony Avella (D-Bayside) allocated the funds for the university towards the end of a recent legislative session and presented them to Queens College Interim President Evangelos Gizis. Photo courtesy Tony Avella’s office

A Queens College science research and teaching laboratory will soon receive what many consider to be a much-needed facelift after state Sen. Tony Avella (D-Bayside) provided $2 million to the school.

The classroom in need of renovations was originally built as a teaching laboratory for physical chemistry in 1949 and was changed into a student research laboratory in 2010. The switch only facilitated the building of new floors, leaving the original tabletops, gas, vacuum and water supply lines and wooden benches in desperate need of an upgrade.

Moveable benches will replace the original wooden benches so the layout of the laboratory can be changed depending on the needs of each research project, the school said. Reconstruction of the classroom’s storage units and electrical service will be made modern as well.

Avella said that it is unfortunately clear that the older research laboratory needs to be upgraded, but he was still proud to announce the $2 million grant obtained towards the end of the legislative session.

“Education is key to the future of our children and we, as legislators, need to ensure that every college, especially within the City University of New York, has the best resources to provide our children with the best possible education,” Avella said.

From start to finish, the project is expected to take two years, according to Robert Engel, interim dean for the division of mathematics and sciences.

“Professor [Michael] Mirkin will move his efforts into the space that he has previously occupied, scattered about, for a short time while the actual construction occurs,” Engel said.

Since there is a research laboratory in the basement of the older lab, there will not be any displacement of teaching space while construction is being done, the dean said.

Attendees met on July 18 at Queens College to discuss the plans and compare the older laboratory with one of the two newly built teaching laboratories. One of the new facilities can hold 24 students, with two spots reserved for the disabled. Another research laboratory used by undergraduates, graduates and faculty for scientific research was also recently renovated.

“We are now getting to other things that are critical for moving ahead,” he said, in reference to the upgrades planned

President Evangelos Gizis said the facilities are where hundreds of thousands of students obtain an education in chemistry and biology and commended Avella for securing state funding for the renovations.

“There is a rule that every 25 years you should renovate each laboratory. And even though we try to renovate as often as we can and control the noise and dust caused by the construction, we cannot always control the resources needed to make the renovations,” Gizis said.