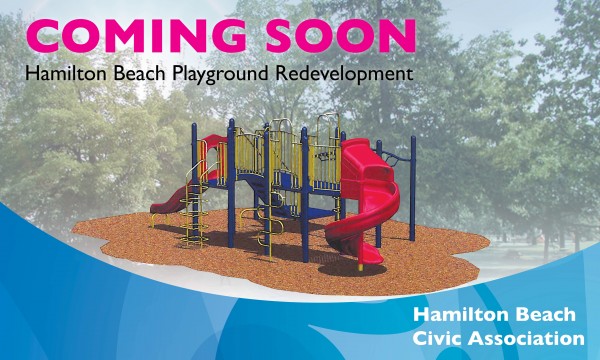 A brand new playground is in the works for Hamilton Beach with a completion date set for September.
Rendering courtesy Resorts World

Playtime has arrived in Hamilton Beach.

Roger Gendron of the New Hamilton Beach Civic Association could barely contain his excitement when announcing the news at last Thursday’s summer meeting. After years of waiting, his community was finally going to see change at its old, decrepit playground by September and nearby Resorts World agreed to pick up the tab. 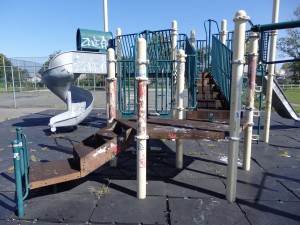 Resorts World is gearing up to help fund the renovation of the decrepit playground in Hamilton Beach. Photo by Phil Corso

“This is really going to go a long way to help this community,” he said. “It’s not just damage from [Hurricane] Sandy. It’s the graffiti that’s out there, too. It’s an eyesore.”

Since Superstorm Sandy swept through the northeast in 2012, the playground at the end of Hamilton Beach has sat in disrepair and disarray. Chipped paint, graffiti, and overturned flooring were only the beginning of the laundry list of things desperately waiting for a fresh start.

And despite the community’s best efforts to get its hands on funding to fix the area, bureaucratic battles between the National Parks Service and city agencies kept the Hamilton Beach playground renovations in flux.

But that all changed when Michelle Stoddart, public relations director for Resorts World Casino, delivered a mockup of the new $40,000 playground to Hamilton Beach residents at last week’s civic meeting showcasing fresh fire engine red slides and a blue and yellow exterior.

“A lot of our staff live in this community and are from this community. We thought it would be a good idea to help,” she said. “This is something we are very excited to get involved with and look forward to seeing it finished.”

Stoddart said Resorts World would be teaming up with Pavers and Road Builders Local 1010 as well as the National Parks Service to reconstruct the playground. The entire deal, she said, was also made possible because of borough elected officials helping grease the wheels.

“It was bad before the storm, but has been an absolute wreck after the storm,” said City Councilman Eric Ulrich (R-Ozone Park), who helped usher in the deal. “It’s criminal that the National Parks Service has not maintained it. Resorts World is the real hero.”

Calls to the National Parks Service were not returned.

State Assemblyman Phil Goldfeder (D-Rockaway Park) said he has seen countless big-name businesses move into southern Queens with only profits on management’s collective mind – but Resorts World broke the mold in his eyes.

State Sen. Joseph Addabbo (D-Howard Beach) said Resorts World has become a welcome addition to the southern Queens community since its arrival in 2011 and showed its commitment by reaching out to what he called a geographically isolated neighborhood in the borough.

“This park rebuilding project will beautify a community still struggling to come back from Sandy and I look forward to working with Resorts World as they see this through,” he said.

All the materials at the site currently will be recycled as it is stripped from the ground, Gendron said, making way for the fresh equipment to be installed during the first week of September. Work should be finished by the end of the month, the civic president said.

“Resorts World was always there for us after the storm and now they have quietly worked behind the scenes to renovate this playground,” Gendron said. “As a whole, the community really appreciates it.”