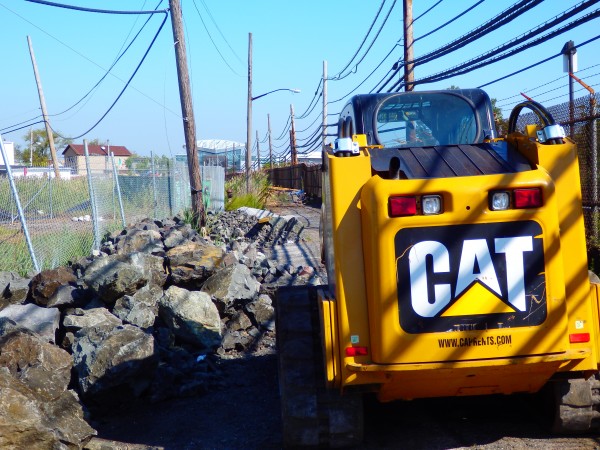 Work is already in motion to revamp a Hamilton Beach walkway leading residents to the Coleman Square train station. Photo by Phil Corso

Superstorm Sandy left many things mangled in its wake. The Hamilton Beach walkway connecting the small southern Queens community to the Coleman Square train station was just one of them.

But finally, nearly three years later, the city has put plans in motion that will bring back the abandoned boardwalk.

“This pathway is just a straight run—everybody used it. It is a vital way in and out,” said Roger Gendron, president of the Hamilton Beach Civic Association. “Anybody who lives in Hamilton Beach can tell you that.”

The city was planning on rebuilding it stronger and wider than before, replacing the old wooden walkway with a more concrete plan and a bit more room to walk. Sal Simonetti, chief of staff for Councilman Eric Ulrich (R-Ozone Park) told the civic association earlier this month that 500 feet of new concrete was already poured into place along the pathway, which should be completely finished by the end of September.

For Gendron, the work was seen as a solution to what has become a community safety hazard. Since the pathway went out of commission, the civic president said he and his neighbors were forced to seek out alternative ways out of Hamilton Beach, including the Q11 bus or by foot.

But because of an inconsistent Q11 schedule, the latter was more often the most likely method of transportation.

“It adds a lot of time walking. Now, the situation has become a safety hazard, especially on Russell Street,” Gendron said. “We pushed for sidewalks. We push and we push, but as soon as we stop talking about it, the city stops talking about it too.”

The walkway used to be made up of a wooden material, which Gendron said decayed over time and sometimes was the source of a static shock for those walking along it. But the strong winds of Sandy forced the boardwalk to float away into the neighboring waterways.

Simonetti said city agencies grappled over which would directly oversee the project, thus contributing to part of the long delay. Now, the Department of Citywide Administrative Services has signed on to oversee the repair plans, Simonetti said.

Along with the new walkway, city plans also mapped out other upgrades for those commuting by foot, including new fencing along the water. Gendron said the unique geography of the walkway not only provided for a scenic view for those getting in and out of Hamilton Beach, but also made for slightly different construction techniques to get the job done.

“I have to give Sal a ton of credit because he did not stop,” Gendron said, referring to Ulrich’s chief of staff for his tireless efforts to see the boardwalk redone. “He was relentless to find out who owned it. They’re the ones who pushed to get this done.”