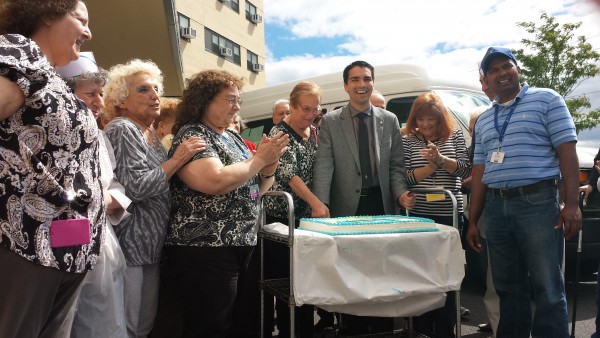 The vehicle will serve four Catholic Charities senior centers throughout Ulrich’s district: Howard Beach, Woodhaven, Rockaway Beach and Ozone Park. The councilman’s office secured $25,000 for a driver to transport older adults from their homes to the senior center for activities, classes and workshops; and day trips to shopping centers, farmers markets, parks and sporting events, among other destinations.

“This is so important for seniors in our community,” said Ulrich, moments before ceremonially cutting a cake to commemorate the day in front of the Catholic Charities Howard Beach Senior Center Peter J. Striano Residence. “This van will be a lifeline for them.” 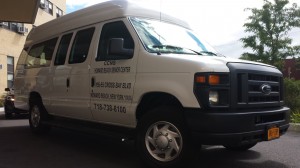 Debra Hoffer, director of field operations for Catholic Charities said that the organization is grateful “to have such a great partnership with Eric Ulrich, who always supports the needs of older adults.” Hoffer called the shuttle an “essential service.

“We don’t want any senior to be socially isolated,” she related. “This new service will enhance the ability of our seniors to live independently.”

Many older adults on Monday afternoon praised the care and attentiveness of Daniel Persaud, who has been driving the bus for about a month.

Ulrich went on to call the shuttle “desperately needed,” especially for the area.

“We live in a part of Queens where public transportation stinks,” he said, characterizing commuter options as dreadful, even prior to the damage wrought by Superstorm Sandy two years ago.

The bus is one example of the city’s beefed-up approach to handling the growing senior population. The council and de Blasio administration increased the Department for the Aging budget eight percent—to $280 million—for fiscal year 2015.