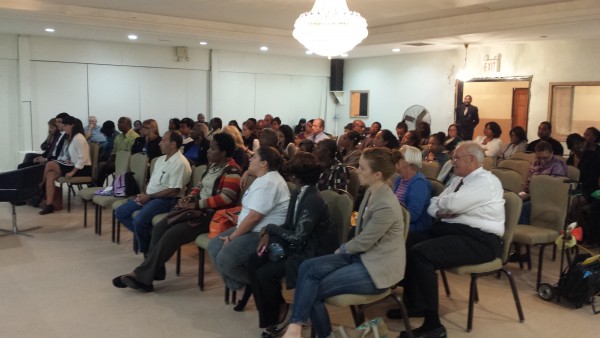 Rockaway residents listened attentively on Monday night as representatives from Doctors of the World and Columbia University explained the findings of a post-Superstorm Sandy health report. Photo by Michael V. Cusenza

Chaplain Nigel Loncke initially noticed the trend as he knocked on doors. Homeowners, apartment renters, entrepreneurs, retirees, young professionals—regardless of race or socioeconomic status they provided similar answers to the post-Superstorm Sandy health survey he was helping to administer.

“People were really open about their health concerns,” Loncke said.

And those concerns seemed to center on the psychological. While many residents talked about bouts with mold and subsequent pulmonary issues, a large part of the dozens of households that Loncke surveyed raised concerns regarding depression, anxiety and sleeplessness, he said.

“For most people, when it rains it just rains,” Loncke related. “But for Rockaway residents, [rain] means something totally different now.”

Those issues and more were discussed this week at a town hall meeting in Arverne. Organized by Assemblyman Phillip Goldfeder (D-Rockaway Beach), the confab drew 60-70 residents of the Rockaways to hear representatives from the nonprofit Doctors of the World USA present and explain the findings of their “Assessment of Health Needs in The Rockaways Post-Hurricane Sandy” report.

Two years after Sandy, healthcare issues in the Rockaways are worsening, according to the report that was researched jointly with Columbia University’s School of international and Public Affairs. Doctors of the World founded a free clinic on Beach 102nd Street one year ago to address the area’s severe healthcare needs.

“We already knew Rockaways residents had to overcome severe barriers to access healthcare—that’s a key reason why we established our free clinic,” said Noah Barth, Doctors of the World program manager. “But there’s an absence of hard data on this. We’ve tried to fill that gap, and the results have surprised us. We expected to find low-income communities with poor health outcomes and poor access to healthcare services, which we did; but we also found that the deficit in affordable services is impacting everyone, including people with insurance and those in higher income brackets.”

The report shows 46 percent of respondents cited lack of facilities and limited services as the main barriers to healthcare access, in addition to long wait times, inconvenient hours of operation and expensive services. Other key findings include support of anecdotal evidence that Rockaways health disparities, which predated Sandy, were worsened by the storm; self-reported incidence of “fair” or “poor” health is higher than New York City as a whole; and 12 percent of survey respondents reported needing medical care at some point in the previous year and not receiving it.

Despite the negative findings, Goldfeder said there is work to be done, work that will rehabilitate the infrastructure and, perhaps more importantly, the spirit of the Rockaways.

“This is not the end of the conversation, this is only the beginning,” he asserted. “Healthcare has always been an issue for south Queens and the Rockaways. Any time we can highlight that and bring attention to it, we will.”