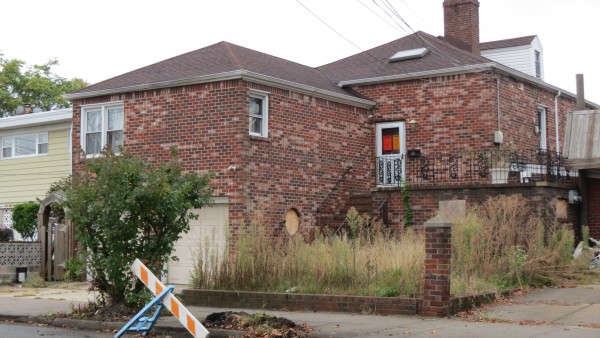 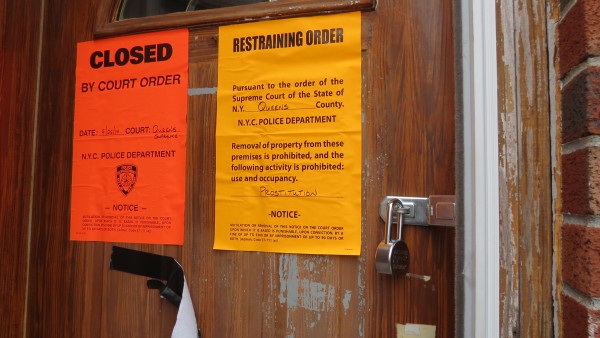 Cops kicked out the two main squatters late last week, installed a padlock on the front door and put up these stickers.
Photo by Michael V. Cusenza

Two well-known area vagrants were treated to that chorus by more than one neighbor last Thursday night as they ambled off the block after authorities forced them out of the Howard Beach house that area residents said has been a haven for prostitution, drug dealing, violence and other crimes for the past two years.

Vice cops from the 106th Precinct and Queens District Attorney’s Office investigators, performing a nuisance abatement around 9 p.m., booted Amanda Miller, 38, and Logan Gruntz, 33, from the troubled house on 95th Street between 159th and 160th avenues, padlocked the front door and placed bright official stickers on it declaring the edifice closed by court order.

And not a moment too soon, according to one neighbor who asked that his identity not be revealed.

“Business was booming [last Thursday],” he noted, referring to johns frequenting the house. “I counted five cars within an hour and a half.” 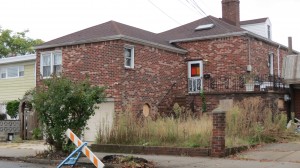 his house on 95th Street in Howard Beach has been a magnet for drugs, fights and prostitution for the past two years. Photo by Michael V. Cusenza

The neighbor said the house began to decay after Superstorm Sandy hit and the house’s original owner, Maria Savinetti, moved away.

“This is going on for about two years now,” he said. “The cops have been here so many times for everything—prostitution, drugs, everything.”

The house quickly fell into disrepair, attracting rodents as well as a criminal element. The city Department of Housing Preservation and Development filed three complaints at the property in July, indicating that the gas was shut off, and both mice and mold were discovered inside the house.

Saying “you can only turn a blind eye for so long,” the neighbor soon began to circulate a petition identifying Miller and Gruntz as the nexus of the problem. It was eventually signed by more than 100 concerned residents.

“We just want to make sure the house is safe and there is no criminal activity going on,” said the neighbor who prepared the petition.

The next step, according to the neighbor, is to get “the right agencies” inside the house, including the city Buildings Department. He said that Sanitation and Fire have already visited the property numerous times over the past few months. The neighbor also reported that he and several residents have taken matters into their own hands, cleaning the catch basin in front of the house and the garbage that was strewn all around it.

Saying he fears the unwelcomed guests might soon return, the neighbor called last Thursday’s development a “temporary resolution,” but also said things are moving in the right direction.

“Things are looking optimistic, because as we speak, the house is shut down,” he noted. “But we’ve got to stay on top of it.”

The grateful neighbor also thanked this newspaper for bringing the problem to the attention of the public and authorities.

“If it wasn’t for The Forum, this would have fallen on deaf ears,” he said. “It was only when the paper got involved that the wheels started turning.”