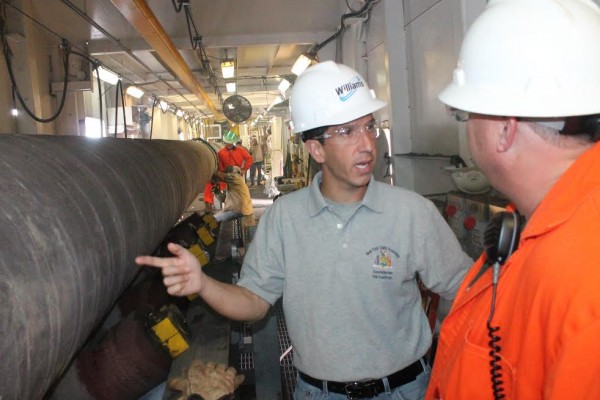 Since receiving the green light from the Federal Energy Regulatory Commission this past May, the Rockaway Natural Gas Pipeline continues to have its share of critics and other detractors who oppose the project on principle alone, arguing against the expanded use of natural gas in the borough.

But in recent months, environmental activists have found themselves singing the praises of Williams Transco, one of the companies responsible for building the $265 million pipeline to better supply the Rockaways with natural gas.

When complete, the pipeline project will run through Gateway National Recreation Area, including Jacob Riis Park and Jamaica Bay.

Williams Transco’s part of the pipeline project is a three-mile section that will connect the Rockaways to an existing natural gas line in the ocean that runs parallel to the Rockaways. The project also calls for the installation of a gas metering and regulating station in two hangars at Floyd Bennett Field in Brooklyn.

He added that the company posts weekly construction status updates on their website at williams.com/rockaway, where residents can follow along as the pipeline project moves towards completion.

The other part of the pipeline, which now lies beneath Flatbush Avenue stretching from Kings Plaza Shopping Center to the Memorial Parkway-Gil Hodges Memorial Bridge where the pipeline enters the Rockaway Inlet and then stretches to the Rockaways, was constructed last summer by National Grid.

Back in March, Dan Mundy, Jr., along with other Rockaway environmental activists, worried that the project would take a major toll on water quality and marine line, but that reality has yet to materialize.

“We have been conducting scuba dive operations at the nearby Rockaway Reef to ensure no negative impacts and none have been noted to date,” said Mundy Jr., who is a member of the Jamaica Bay Eco-watchers environmental group as well as the president of the Broad Channel Civic Association.

“But, even more important,” he said, “We are happy to report that our three-year push to see an environmental offset to this project has been a success.”

Mundy Jr. said that Williams Transco has agreed to fund a wetlands restoration project at Sunset Cove in Jamaica Bay for $500,000, and has also agreed to replenish the artificial reef off the coast off the coast of Rockaway for $1.5 million, effectively allowing for new, much needed material, to be placed in the designated reef zone, as well as funding for the state Department of Environmental Conservation to conduct post monitoring.

Back in April, both Assemblyman Phil Goldfeder (D-Rockaway Beach) and state Sen. Joe Addabbo, Jr. (D-Howard Beach), whose district includes part of the Rockaways, expressed support for the pipeline project, acknowledging that Rockaway has a problem keeping up with demand for natural gas and that the pipeline is definitely needed.

And, more recently, Goldfeder said that he had a chance to go out to Floyd Bennett Field, where Williams is constructing a metering and regulating facility, as well as go out on a barge off the Rockaways to inspect some of the actual pipeline construction taking place.

“I’m satisfied with what I saw,” Goldfeder said. “[Williams Transco] constantly testing the water quality… Generally, natural gas is something that people continue to rely on and this pipeline will help to increase capacity and that’s something that is needed.”

He added, “Williams has put their money where their mouth is while also increasing our access to natural gas. But, there are always concerns and potential for accidents, but I’m satisfied they’re taking the necessary precautions.”

Goldfeder also gave Williams high marks for funding the wetlands restoration project and essentially “giving back” to the community and the environment.

“We’re talking about people who want us to use alternative energy sources such as solar and wind,” he said. “I would like that too, but we’re just not there yet and this pipeline will address our current energy needs.”

But, opposition to the pipeline has not yet been squelched.

“The Rockaway Pipeline was installed this summer within a short distance of beachgoers at Riis Park… The whole project is expected to become operational in the late fall. In short, we lost this one,” said Maureen Healy, a member of the Coalition Against the Rockaway Pipeline.

“The public should be aware though that the Rockaway Pipeline is just one early piece in what industry expects to be a major build-out of shale gas infrastructure,” Healy warned. “That build-out will encourage more fracking in the US, enable massive exports of liquefied natural gas, cause a resulting rise in the price of gas, speed-up climate change, and delay the nation’s conversion to renewables by a generation.”