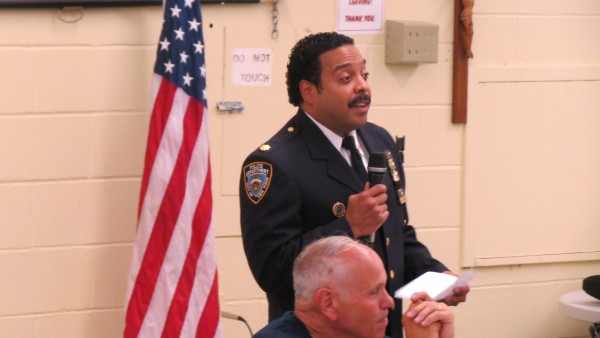 To date this year, crime is down overall in the 106th Precinct, but arrests are up as officers respond to a record number of calls, according to the command’s top cop.

Deputy Inspector Jeff Schiff, commanding officer of the 106th Precinct, said that while crime is down about 2 percent, arrests are up approximately 24 percent compared to this period last year.

“It’s a small decrease [in crime], but it’s a decrease,” said Schiff Tuesday night at the Howard Beach-Lindenwood Civic meeting.

Schiff also noted that automobile break-ins, specifically, dropped “dramatically” in September. He credited this, in part, to the arrest and incarceration of Richard Hobbs, who Schiff characterized as a neighborhood menace allegedly responsible for break-ins and thefts.

“He’s still in jail with a $60,000 bail, which is very high,” Schiff said, adding that Hobbs’ alleged partner in crime, Joseph Quick, has apparently skipped town. “If I can’t catch him, I need to displace him,” Schiff asserted.

His officers responded to approximately 31,000 calls over the past three months, Schiff said, up 6 percent from this time last year. That includes about 3,200 311 jobs, which he noted is a 60 percent increase.

“It’s a very filled day the officers have,” Schiff said.

As for crimes on which the command is currently focusing, Schiff said identity theft is “killing the precinct,” and that Crossbay Boulevard panhandlers better beware.

“If they’re out in the street, blocking traffic, they need to be arrested,” he said.