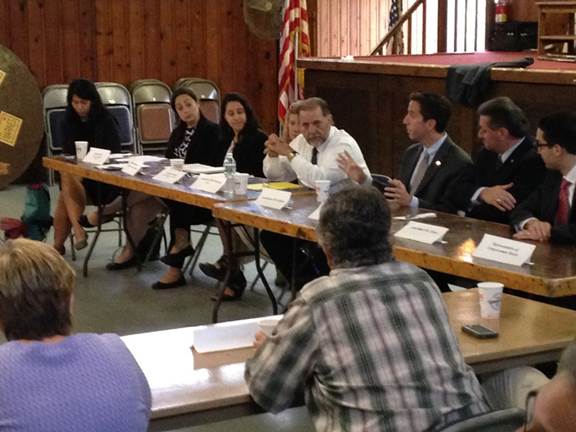 While it has been nearly two years since Superstorm Sandy descended on the city, leaving unimaginable destruction in its wake on the Rockaway peninsula and in southern Queens, several communities are still coping with damage and the newfound anxiety associated with hurricane season.

In an effort to assuage those fears a bit and continue the dialog on emergency preparedness, area civic leaders and elected officials last week met with the new commissioner of the city Office of Emergency Management at American Legion Post 1404 in Broad Channel.

During the meeting, the commissioner and his staff outlined some of the changes that have been implemented since Sandy and agreed to follow up with individual communities to share plans already in place and continue to adapt resources to meet the needs of the area’s unique neighborhoods and geography. Additionally, he agreed to appoint OEM borough directors that can be present on the ground during disasters and coordinate resources and manage available staff brought in from elsewhere in the city.

“We appreciate Commissioner Esposito’s willingness to come down to meet and offer a comprehensive action plan for future disasters,” said Joann Ariola, president of the Howard Beach-Lindenwood Civic. “It is our hope that OEM regularly communicates with local elected officials and community leaders in providing the details of this plan ahead of time and also considering community input.”

Ulrich called the confab “a great opportunity to discuss the ongoing emergency preparedness challenges” that the area faces.

“While there are still many concerns about OEM disaster response policy, I’m confident that Commissioner Esposito’s first-hand crises experience with the NYPD will serve the agency and peninsula residents well,” Ulrich said.

Goldfeder summed up the roundtable by noting that one of the most important lessons learned from Sandy is that communities are strongest when they work together toward a common goal.

“Sandy was a wakeup call for our city and our families and while so many are building back more resilient, we must continue to put plans in place for the future,”  he said.