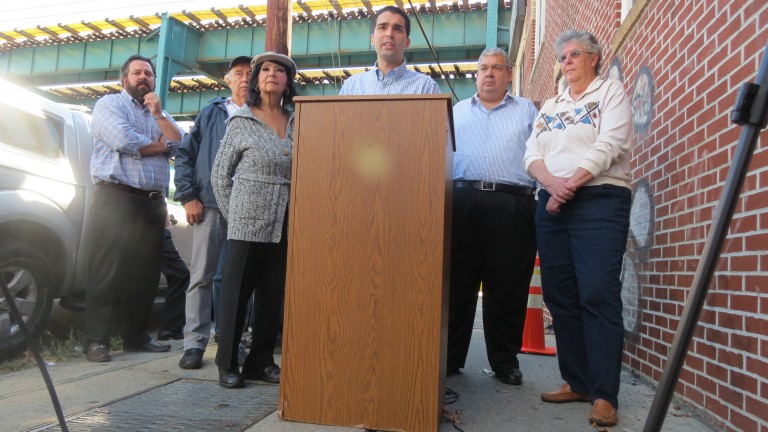 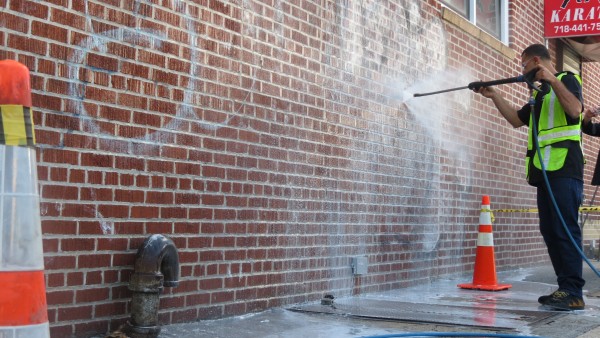 “Now you see it,” he remarked as a worker turned off a powerwasher, “now you don’t.”

Civic leaders and business owners joined Ulrich on Wednesday in front of the brick wall on the corner of 101st Street and Jamaica Avenue to tout a new anti-graffiti initiative that has already begun in the 32nd Council District. Ulrich’s office allotted $25,000 in discretionary funds to the Queens Economic Development Corporation to eliminate graffiti at six major corridors in the district. Magic Touch Cleaning & Maintenance won the competitive bid and is working with QEDC to beautify neighborhoods. 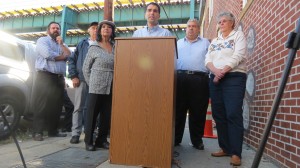 Councilman Eric Ulrich (at podium) is joined by civic leaders and business owners to announce the anti-graffiti initiative that has already begun in the 32nd Council District. Photo by Michael V. Cusenza

“Graffiti is a pet peeve of mine; always has been, always will be,” Ulrich said. “It is not art. It is an eyesore, and an affront to civic pride.”

“It’s great that the program is coming back to this area,” said Martin Colberg, president of the Woodhaven Residents’ Block Association, which in the past has led volunteer efforts to remove graffiti. “It changes the quality of life.”

To that end, Ulrich pointed to graffiti removal as a prime example of the “broken windows” criminological theory—work to curb quality-of-life issues that could escalate into more serious offenses.

“Graffiti leads to more crime,” he noted, later adding, “If it’s successful, we will expand this program and put more money into it. No doubt about it.”