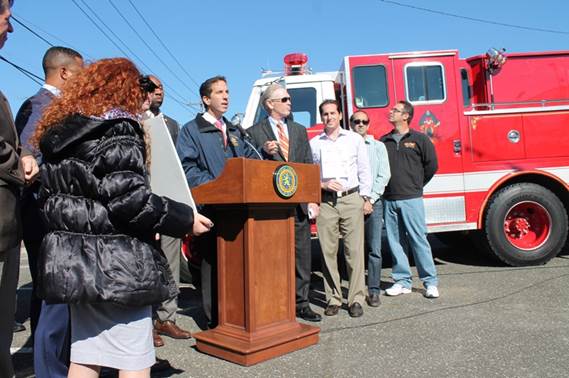 Emergency evacuation infrastructure and route signage along the Nassau Expressway and connecting roadways in southern Queens and southwestern Nassau County are in desperate need of immediate repair, according to area elected officials.

Assemblyman Phil Goldfeder (D-Rockaway Beach) and Nassau County Legislator Howard Kopel (D-LI) led a rally on Sunday morning in Five Towns to call on the state Department of Transportation to improve the roadways and signage before more natural catastrophes wreak havoc on communities.

“In southern Queens and Rockaway, we have had two full evacuations in three years, both times on short notice,” Goldfeder said. “These roadways can’t handle rush hour traffic, let alone a massive evacuation. Waiting for another disaster like Superstorm Sandy to address our vital roadway infrastructure will only make the repairs more expensive and potentially put our families at risk during future emergencies.”

Traffic congestion and poor emergency evacuation route signage along the Nassau Expressway has long been a concern of residents of both Queens and Long Island, who in recent years have seen dramatic increases in traffic as larger retailers and “big box” stores have established a foothold along the roadway. State DOT’s proposed Nassau Expressway Operational Improvement Project would address traffic operational and safety issues, poor pavement and drainage conditions, and aesthetic issues along the route. However, this project isn’t expected to begin until 2023, with an anticipated completion date in fall of 2025.

“On the Rockaway peninsula, we only have three points of evacuation for residents and emergency personnel in the event of a disaster—the Marine Parkway Bridge to Brooklyn, the Cross Bay Bridge to Howard Beach and the Nassau Expressway,” Goldfeder noted. “We need to ensure that residents of southern Queens and Rockaway can get to safety in the event of a disaster like Superstorm Sandy and that’s why the state needs to take action and repair our vital evacuation routes.”

Earlier this summer, Goldfeder and Kopel jointly launched petitions to call on Gov. Andrew Cuomo to invest in infrastructure and emergency evacuation signage improvements to Route 787. To date, more than 3,000 signatures have been collected in support of this initiative. Residents can still sign on to the petitions by visiting Goldfeder’s and Kopel’s websites at FixOurRoadsNow.com and Fix878Now.com.