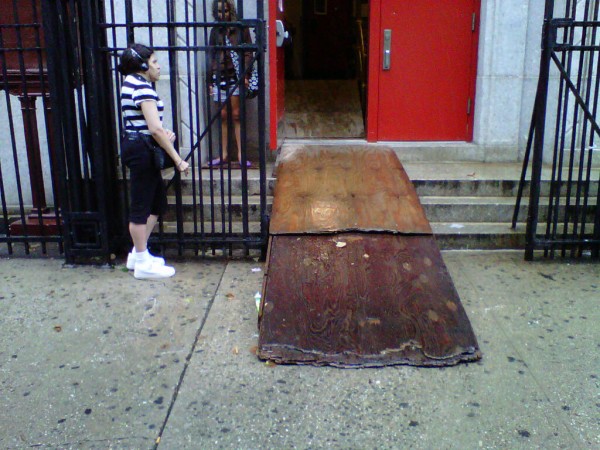 Faulty ramps to emergency shelters should become things of the past when the next disaster strikes the city, thanks to a settlement agreement delivered to a federal judge in New York.
Photo Courtesy of CIDNY

A federal judge’s decision last week will produce impactful changes in the way the city responds to natural disasters, according to local advocates.
Judge Jesse Furman accepted a settlement agreement that mandates improvements in the way the Big Apple mobilizes services before, during and after events such as Superstorm Sandy.
Christine Chuang, senior staff attorney for Disability Rights Advocates, said the biggest change will ensure that New Yorkers with disabilities know where to flee in a disaster.
“This agreement constitutes one of the most comprehensive emergency plans in the country,” she said. “By the end of September 2017, the city is going to have a minimum of 60 accessible emergency shelters.”
Chuang said that change alone should allow the city to shelter 120,000 New Yorkers with disabilities. Furman found that the city had not adequately planned for the needs of people with disabilities, and has accepted the settlement agreement for future disaster planning.
The Center for Independence of the Disabled was one of the plaintiffs in the suit. During Sandy, CIDNY Executive Director Susan Dooha said, some New Yorkers with disabilities were stuck in high-rise buildings for weeks without help. She said the agreement now requires the city to go out and check on them “and assess the critical needs of people with disabilities in the wake of disaster, and get help—person-to-person, door-to-door—to people with disabilities who cannot get out to help, but must have help brought to them.”
Dooha said CIDNY spent a dozen years fighting for these changes, which should take the guesswork out of life-and-death decisions for New Yorkers with disabilities.
“In the past, if you used a walker or a wheelchair or a scooter,” she said, “you would have to guess whether the shelter for your community was accessible.”
Dooha summed them up as radical changes in the way the city does business when disaster strikes. She called them “a real victory” as the nation gets ready for the 25th anniversary of the Americans with Disabilities Act.