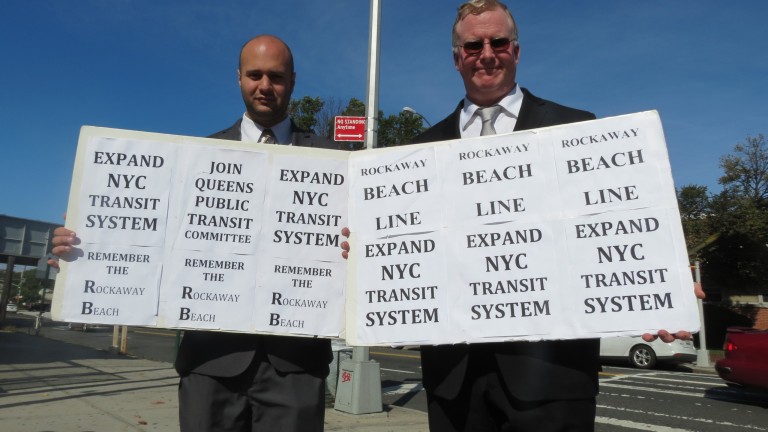 Friends of the QueensWay’s Travis Terry (at podium) discussed key points of the new QueensWay Plan on Tuesday In Forest Hills. Photo by Michael V. Cusenza

Friends of the QueensWay and the Trust for Public Land this week released the much-anticipated QueensWay Plan, a study which both groups jointly characterized as “a blueprint for the QueensWay—New York City’s next great park.”

The project involves converting the long-abandoned Rockaway Beach Branch line of the Long Island Rail Road—a 3.5-mile swath of the borough, from Rego Park to Ozone Park—into a $120 million public park boasting trails and many amenities.

According to the study, the QueensWay will “provide safe, easy access to Forest Park; new recreation opportunities for the 322,000 people living within a mile; a boost to local businesses and a high-profile showcase for the most culturally diverse borough of New York City.” 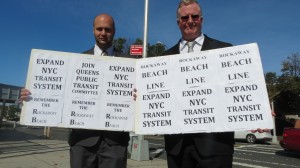 Mike Scala (l.) and Phil McManus of the Queens Public Transit Committee are opposed to the plan. Photo by Michael V. Cusenza

The QueensWay, which would go through the neighborhoods of Rego Park, Forest Hills, Glendale, Richmond Hill, Woodhaven and Ozone Park, proposes to be an economic engine to surrounding communities; provide safer streets and alternative transportation; provide recreational and health options; boost park equity; and present educational, ecological and cultural opportunities.

While the plan has garnered overwhelming support from elected officials at every level of government, the Queens Chamber of Commerce and even some area businesses, among other entities, the QueensWay is not without its detractors.

“The QueensWay and Trust for Public Land have wasted taxpayer dollars on expensive, out of state consultants and one-sided studies that don’t actually represent the interests or needs of Queens families,” Assemblyman Phil Goldfeder (D-Ozone Park) said. “Elected officials and community leaders from every part of the borough and as far as Manhattan have expressed full support for the complete restoration of the Rockaway Beach Rail Line and increased transit options. In a few weeks, the Queens College Department of Urban Studies will release its own comprehensive and objective study, done by local scholars, faculty and students. I am confident that this new independent study will reflect the true needs of Queens residents and small businesses. Our growing coalition, including the MTA, will continue the fight to expand transit in Queens while easing commutes, creating jobs, cleaning the environment and expanding our economic development.”

Phil McManus of the Queens Public Transit Committee has pushed for the MTA to bring back rail service on the Rockaway Beach line.

“This park is only going to further divide Queens,” he said on Tuesday. “We’re already divided. We need trains!”