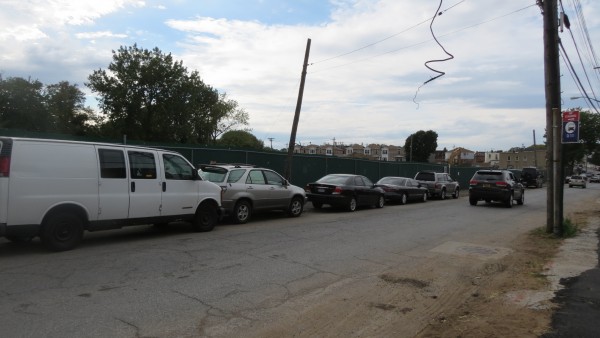 Area residents and community leaders are cautiously optimistic about the start of the long-delayed Centreville sewer project. Photo by Michael V. Cusenza

To Centreville residents, or those who live close to Albert Road in Ozone Park, the mere mention of the now 30-years-overdue sewer and infrastructure project for the area will likely be met with more than a bit of skepticism.

“For me, who has been involved with this project for some 35 years, back when it first was proposed…There have been so many false start dates that I have my concerns and doubts about any new dates the city comes up with,” said Howie Kamph, president of the Ozone Park Civic Association, sounding exasperated.

The project, first proposed as far back as the Koch administration by the city Department of Design and Construction, is essentially a $42 million plan to alleviate flooding and improve drainage in the area bounded by Linden Boulevard to N. Conduit Avenue, Cross Bay Boulevard to Hawtree and Cohancy streets.

And although the three-year construction plan, which calls for the installation of new catch basins, curbs, sidewalks, pedestrian ramps, sewers and roadway throughout Centreville and the Albert Road area, looks to be finally getting underway, a hard and fast start date continues to be elusive.

“This is a project that has been slowly moving its way for many years through the processes involved in bringing this type of project to fruition,” said Betty Braton, chairwoman of Community Board 10.

Part of the reason for the project’s seemingly endless delays may be rooted in the fact that the city had to acquire private property in order to replace and rebuild sidewalks. And, those familiar with the process say it is both lengthy and time-consuming while residents relocate and await property payments from the city.

At a presentation to the Ozone Park Civic Association this past June, DDC officials listed spring/summer 2015 as the “anticipated” start dates for the major construction.

Previously, Kamph said that he had received an email on Feb. 27 from the DDC stating that the city expected to break ground on the now legendary project in February or March of 2014.

Calls and emails to the DDC seeking further clarification on the project’s start date were not returned.

“[Centreville/Albert Road] is a gauntlet of war-zone pot holes, no sidewalks in some areas, no cut outs for handicap access from the street to sidewalk and there are dangerous, uneven curbs,” Kamph said in an email.

Despite Kamph recently announcing in an association newsletter that the project has indeed begun its earliest phase, with recent work by National Grid to replace gas lines in the area, he is still wary.

“It’s like the story of the boy who cried wolf,” Kamph said. “It is a disgrace, the condition of the sidewalks and streets in the area. Besides having to wait for 35 years for this project hopefully to start, the city’s Department of Transportation has refused to do any repairs saying it could hold up the project even longer.”

Kamph added that he and many other area residents are “frustrated.”

“As one of my neighbors said to me,” Kamph related, “he would probably not be around to witness this [project] ever being done, which is true to many.”