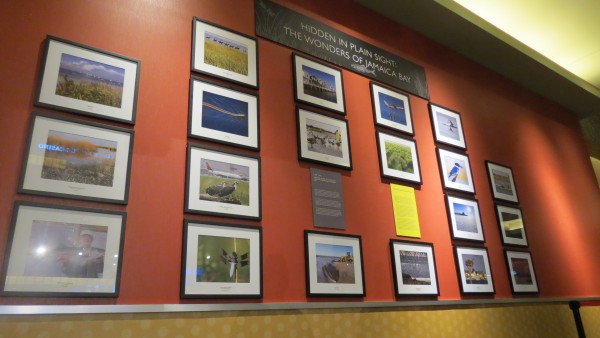 Unveiled Tuesday morning in the Times Square Atrium, “Hidden in Plain Sight: The Wonders of Jamaica Bay” highlights the city’s largest open space through the photography and cinematography of Dan Hendrick, François Portmann and Don Riepe.

“I fell in love with Jamaica Bay about 15 years ago,” said Hendrick, author of “Jamaica Bay” and an environmental advocate who works with the New York League of Conservation Voters. “I fell in love with the people, too. My goal here is really to inspire people, the people who think you have to drive hours to get to nature, when it’s in our backyard.” Indeed the bay is the only national wildlife refuge accessible by subway in the United States.

Riepe, who serves as the director of the New York chapter of the American Littoral Society and co-chair of the Jamaica Bay Task Force, said that personally it felt good to be recognized for his artistry and be able to promote the beauty of the bay’s ecosystem.

“I think [the exhibit] is going to bring people out to the wildlife refuge, and hopefully have them support it,” he said.

Michelle Stoddart, director of public relations and community development at Resorts World NYC, said she was looking for a new exhibit to bring to the atrium space when Hendrick approached her about supporting the Audubon Society.

“So many people who come through our doors don’t know that this exists here in New York City,” the Kew Gardens resident related. “Everything here is so urbanized. [The bay] absolutely struck me as amazing because you feel like you’re not in the city.”

Betty Braton, chairwoman of Community Board 10, said it was “great to see Resorts World continue to build its ties to the local community,” and that the exhibit “offers tourists, and even local people, what else is here.”

The showcase is scheduled to run in three parts: Part I: Life on, above and in the bay (Opening October 2014); Part II: The birds of Jamaica Bay (Opening December 2014); and Part III: Finding balance: The interplay of nature and the city (opening January 2015.)

Scenes from Hendrick’s upcoming documentary, “Jamaica Bay Lives,” are part of the exhibit; the power of the moving image and its ability to deliver a message were not lost on the Sunnyside Gardens resident.

“I can tell [visitors]—but we can show them,” Hendrick said. “That’s ten times more effective.”