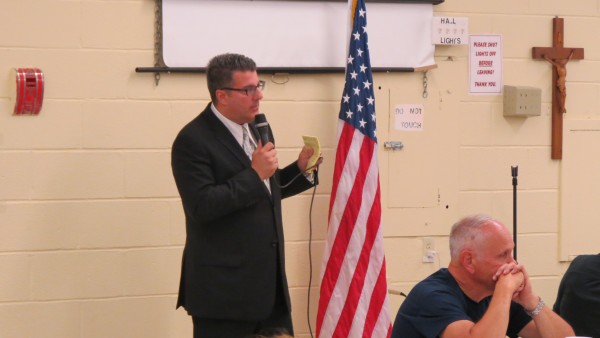 The reputations of the city and state legislatures have been in tatters for so long now—so many elected officials have been charged and convicted of corruption and betraying the public trust—that one publication recently held a contest which awarded a free dinner to the contestant who could correctly guess the next elected official to be indicted in New York.

With this as one of myriad examples of how the Empire State’s legislative leaders are perceived, why would anyone want to run for elective office?

“Because I want to use my abilities to help people in the district,” answered Michael Conigliaro, the GOP candidate running against state Sen. Joe Addabbo Jr. (D-Howard Beach) for the 15th District seat. “I want to change the lives of my children for the better.”

Conigliaro, 45, a married father of two girls and political novice, said he was approached in July by Sal Simonetti, City Councilman Eric Ulrich’s (R-Ozone Park) chief of staff, to run against the three-term senator after former Councilman Tom Ognibene ultimately declined to get in the race. After talking it over with his wife, Conigliaro accepted the offer.

“I was told if I didn’t run, my opponent would be running unopposed,” recalled Conigliaro, a Kew Gardens native who now lives in Rego Park. “I didn’t want that happening; because I think political elections should always have an incumbent and a challenger.”

Conigliaro, a manager of a Floral Park law office, said he’s been a Republican since he registered to vote in 1987, when Ronald Reagan was president and “making a difference in the world,” he said.

“I thought that his philosophy was ingrained in me as well,” Conigliaro added.

As far as policy, Conigliaro said he is against: marriage equality, the DREAM Act, the SAFE Act and the Common Core state educational standards initiative.

“It needs to be revamped,” he posited about Common Core. “It’s hurting—not helping—students, teachers and parents, the way it’s been designed.”

Conigliaro slammed Addabbo for the senator’s approach to the proposed homeless shelter in Glendale. In August, Addabbo sent a letter to Schools Chancellor Carmen Farina and Department of Homeless Services Commissioner Gilbert Taylor, asking them to consider the Cooper Avenue site for a much-needed school instead of a shelter. Conigliaro, who worked in the Sacred Heart Church homeless services program for 10 years, also is opposed to the shelter site, but said the current state of affairs “could have been avoided had a conversation happened between the mayor, Addabbo and local leaders.”

Conigliaro characterized small businesses in District 15 as job creators, and promised that, if elected, he would work to ease the tax burden on entrepreneurs. Additionally, he indicated that he would make a permanent Rockaway Ferry a priority, because he sees it as a “catalyst” for untapped economic growth.

Ultimately, Conigliaro said he’s confident that he can do a better job in Albany.

“I just feel that the district is not being properly represented by Sen. Addabbo,” he said.