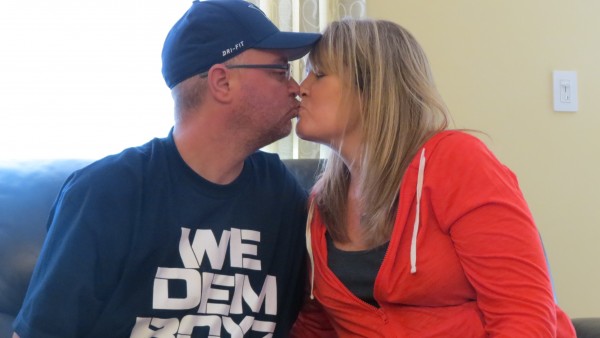 Ten years ago, Christina McCabe gave her husband, Tim, the ultimate gift when she donated one of her kidneys to him. Photo by Michael V. Cusenza

Theirs is a love story, the old-fashioned kind—more Bogey and Bacall than Kimye. It is old school, but one that brings new meaning to the vow “…in sickness and in health…”

Theirs is a love story, born in Howard Beach and raised in Hamilton Beach, strengthened along the way by the arrival of two boys, and overcoming seemingly endless medical obstacles.

And the latest in 20 years of health-related tests for Tim and Christina McCabe is a familiar one: Tim needs a kidney transplant.

This marks the second time the couple has entered the ring and danced with this foe. Ten years ago, Tim, now 44, was diagnosed with Goodpasture Syndrome, an autoimmune disease in which antibodies attack the lungs and kidneys. His body had already fought through ulcerative colitis and the blood disorder thrombotic thrombocytopenic purpura; and in the spring of 2004, at age 34, he needed a new kidney.

But, as Christina said, the search for a donor would end just as soon as it began. She was a perfect match. 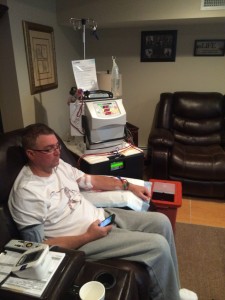 Tim McCabe must undergo dialysis five days a week as he waits for another kidney transplant. Photo Courtesy of Christina McCabe

“I felt proud that I was going to be able to help my soul mate, the love of my life, and still be alive to see it,” she recalled on Friday as she sat with Tim at the dining-room table of their First Street home.

Their eldest son, Timmy III, was 3 at the time of the transplant.

“Post-surgery, I felt like my life was going to change for the better,” Tim said.

However, not even two months after the April surgery, Tim’s body began rejecting his new organ. Doctors were able to get the kidney functioning again, but on April 27, 2009, five years to the day of his transplant surgery, Tim’s health nosedived as the host—again—rejected its guest. He would have to return to full-time dialysis as his name sat on the transplant lists in New York and New Jersey.

Then, in late 2012, even after Superstorm Sandy had completely washed out the McCabes’ basement, Tim received a rare bit of good news: A relative of his turned out, on paper, to be a perfect donor. And so the intensive transplant preparations began.

On Nov. 27, 2012, his 16-year wedding anniversary, Tim was on his way to the store when his cell phone chirped. He stopped the car as he listened to the voice on the other end of the line inform him that the procedure had fallen through, that he would not be getting a new kidney. Tim spun the car around in a U-turn, raced home and took out all his frustration on the basement that was still being repaired from storm damage. He then walked upstairs into his bedroom and wept.

Christina, ever the staunch optimist, had no words for her best friend.

These days, Tim undergoes dialysis five days a week for nearly four hours each session. He said he has “no energy to do anything—I can’t play ball, or catch, or practice with my kids…”

As he waits again for a call that he has told his wife he’s convinced “is never coming,” Christina can only watch her husband “basically exist at this point. He’s the frailest he’s ever been…it takes its toll on you.”

Tim said he wants a new kidney—not for himself, but for the sake of his kids, who are now 13 and 5.

“I want to be more involved in my sons’ lives,” he said.