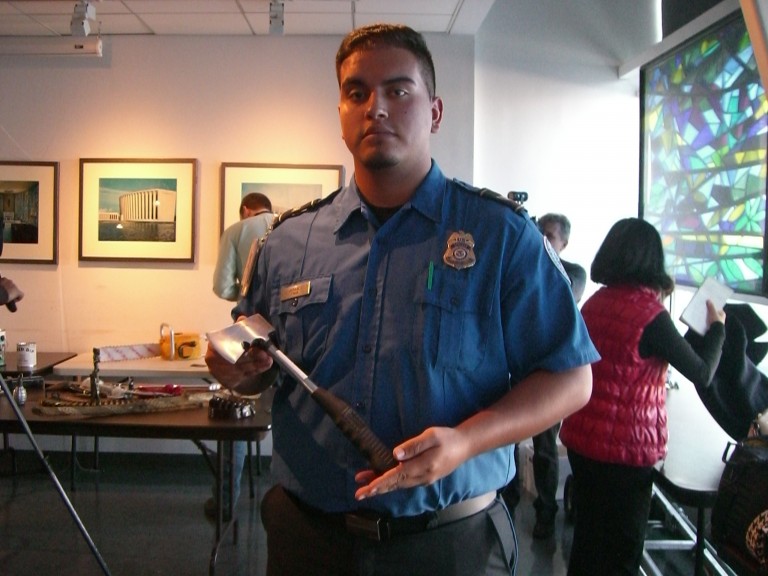 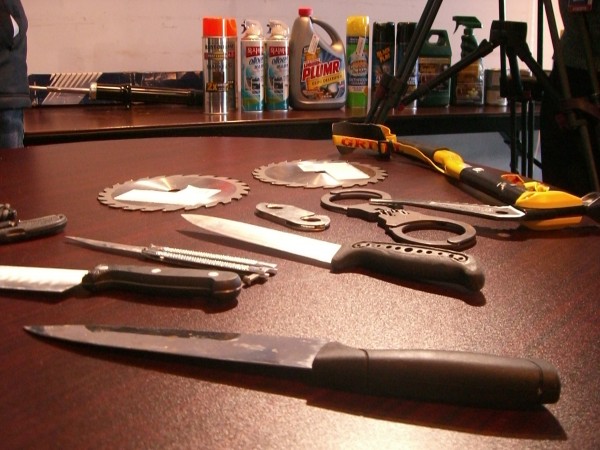 A sampling of some of the sharp objects that the TSA said may only be packed in checked baggage.
Photo by Michael V. Cusenza

In one tiny room on the fourth floor of Terminal 4 at John F. Kennedy International Airport, they ran the gamut—from silly (a bottle of cologne disguised as a hand-grenade; a plastic chainsaw covered in fake blood) to scary (a razor-sharp, shiny hatchet) and everything in between. What do they all have in common?

These are items that the Transportation Security Administration has confiscated at JFK’s checkpoints.

According to the TSA, five to seven guns per day are detected at airport checkpoints nationwide, but that’s not all that passengers bring. 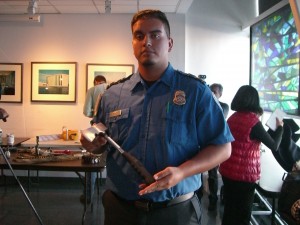 Transportation Security Officer Camilo Bernal displays a hatchet that was surrendered by a passenger at a JFK checkpoint. Photo by Michael V. Cusenza

“You will be amazed at the volume of other prohibited items that people bring to the airport daily,” said Lisa Farbstein, spokeswoman for the Transportation Security Administration. “Hatchets, replica guns, replica grenades, clubs, nunchakus, brass knuckles, and ammunition are all too common. And then there are the knives—pen knives, butterfly knives, steak knives, Swiss Army knives, hunting knives—that people pack in their carry-on bags.”

Farbstein said the most common prohibited item that agents encounter at checkpoints are knives; and the knife that they are confiscating the most lately is the “credit-card knife,” so named for a light, sharp blade concealed in packaging the size and shape of a credit card.

Farbstein said that passengers caught with prohibited items will slow down checkpoint lines.

“If you have a prohibited item, you’re going to be given a choice: you can put it in your checked baggage, run back to the long-term lot and leave it in your car, hand it off to a non-traveling companion or surrender it to TSA.” Farbstein added that an airport the size of JFK sees approximately four tons of surrendered items each year.

Camilo Bernal, who has been a Transportation Security Officer at JFK for the past three years, said the craziest prohibited item that he has encountered was a small statue that when x-rayed revealed a large knife inside.

Additionally, Farbstein said, if passengers are uncertain as to what is or is not a prohibited item, they can download the free My TSA mobile application at tsa.gov. Among other features, My TSA boasts “Can I Bring…?” which allows users to type in an item they plan to bring on a trip to find out if it is permitted or prohibited, and whether they should pack it in carry-on or checked bags.

“It’s our best-kept secret,” Farbstein said of the app.