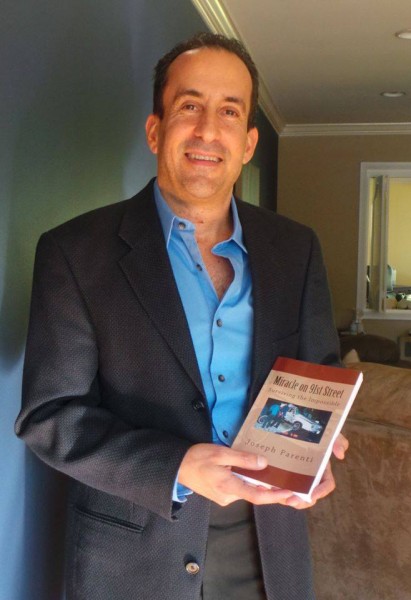 It was Dec. 5, 1988, a cold, blustery night in Howard Beach, and 23-year-old Joseph Parenti was driving along 162nd Avenue on his way home. Meanwhile, a man had stolen a car on Cross Bay Boulevard and was hurtling down 91st Street at breakneck speed, pursued by an independent car-service driver who had witnessed the vehicle theft.

At the intersection, the stolen vehicle collided with Parenti’s, in that moment changing his life forever. Private security officers were the first to arrive and observed the car thief attempting to flee the scene.

Within minutes, emergency responders from the West Hamilton Beach Volunteer Fire Department had arrived and had extricated Parenti, who had an open head wound and was suffering from a cardiac arrest while pinned inside his vehicle. Parenti had two more heart attacks on the ambulance ride to the hospital and entered into a coma.

Thus began Joe Parenti’s seven-month journey to rehabilitate from severe brain trauma and spinal injuries, along the way picking up pneumonia, muscle atrophy, bedsores, and a host of other post-traumatic challenges. His frontal lobe was damaged, and his brain was actually swollen and twisted within his skull. His outward appearance mimicked that; his head and neck were canted and locked, and his spine was twisted.

In the years that followed his release from three hospitals, Parenti eventually found counseling, yoga, loving relationships, and competent doctors that helped him grapple with what he repeatedly called “frustration.” 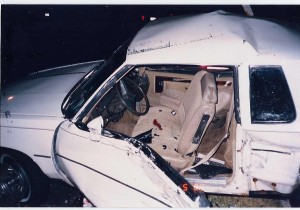 Parenti’s car after he was extricated from the driver’s seat, where he suffered one of three cardiac arrests. Photo Courtesy of Joseph Parenti

“I don’t think there’s a day that goes by that he doesn’t think about the ordeal, but his attitude is never on the negative,” said Lily Acevedo, Parenti’s girlfriend. Acevedo met Parenti growing up in Howard Beach and then reconnected with him about a year ago. She was instrumental in his decision to finally write an account of his ordeal, based mostly on excerpts from a journal he kept after his hospital release.

The book, “Miracle on 91st Street,” has recently been released on Amazon.com. Its second chapter is a reprint of a Forum story from the Dec. 10, 1988 edition, detailing Parenti’s accident. “Fleeing Car Almost a Killer” was the only article he had access to during his rehabilitation, even though other papers had covered the story.

Parenti is donating a portion of book proceeds to the West Hamilton Beach Fire Department. “In seven months, I was in three hospitals, with professionals making mistakes. They didn’t make any mistakes in 20 minutes,” said Parenti of the volunteers he credits with saving his life.

And instead of blaming the doctors who over the years had told him his spine and neck would be crooked for the rest of his life; that he’d never be an accountant as he had wanted to become; and that they couldn’t do anything for him, Parenti went elsewhere—until he found the positive support that he needed to improve his physical and emotional health.

“I like to prove them wrong. Anything they say, I can prove them wrong,” said Parenti. That’s what he told himself over 20 years ago when a doctor informed him that he had “the neck of a 65-year-old,” and that it would never get any better. In addition to being fully mobile and physically fit, Parenti proved them wrong by becoming a self-employed Certified Public Accountant.

Parenti’s rehabilitation is ongoing. He sees chiropractors and masseuses regularly and has made yoga a part of his daily life. Every now and again, Parenti’s neck locks up, and he experiences a flashback to the incident and to his months of feeling helpless and “frustrated.”

For more information about Joseph Parenti’s story and/or how to purchase “Miracle on 91st Street,” go to miracleon91st.com