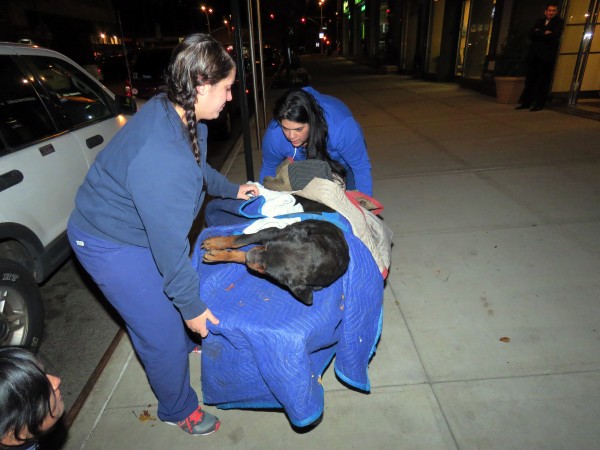 Borough communities are scrambling to raise funds for Dasher, the sick dog that was thrown out like trash from a car in Ridgewood last week and left to die.
Photo by Robert Stridiron

A fundraiser was set for 5 p.m. on Wednesday, Nov. 26, at a historic Woodhaven bar for the continued care and adoption of Dasher, an ailing Rottweiler that witnesses believe was wrapped in a bag and tossed from a moving car last week in Ridgewood.

Neir’s Tavern owner Loy Gordon has donated space for the event, which is co-sponsored by K9-Korral Dog Run.

If you cannot make the fundraiser, you can log on to gofundme.com/bringdasherhome to donate to the cause.

At about 10:30 p.m. last Thursday, Melvin Castillo and his wife, Zulma Valentin, had just finished food shopping when they drove past a bag near the side of the road and witnessed something moving inside it. Castillo backed up his car, got out and approached the cloth bag that he said was tied in knots, only to see a severely ill Dasher collapsed next to it.

“I thought it was dead,” Castillo said, “but then it moved.”

Fearing that the dog would be crushed by oncoming traffic, Castillo parked his car so as to protect Dasher from further injury.

“’We’re not leaving until we get help for this dog,’” he recalled his wife saying.

The couple called 311 and then 911, but a police dispatcher said the cops could not do anything for the dog at the time because it was late and all official animal facilities that the NYPD uses were closed.

As hope dimmed, FDNY Ladder Co. 135 was returning to its firehouse after responding to an automobile accident on the Jackie Robinson Parkway when they came upon Castillo and Valentin, who were now flagging down the fire truck. Firefighters wrapped Dasher in blankets to keep it warm.

“It was absolutely devastating,” Firefighter William Aaron said of the scene involving Dasher. “Just sickening that someone could do something like that.”

Aaron, who owns two dogs, has indicated that he would like to adopt the dog after it leaves the ASPCA, where it is currently being treated. Aaron said that ASPCA officials have informed him that Dasher is “doing much better,” but it could be months before she leaves the facility.