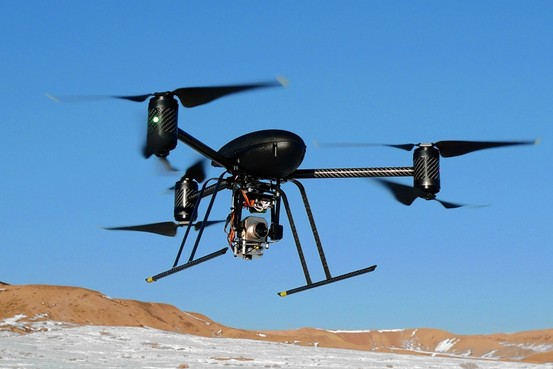 Drones are lately sparking more than just a privacy debate, as they enter restricted airspace and potentially physically endanger passengers flying in and out of airports like JFK and LaGuardia. Photo courtesy of infowars.com

Three recent incidents of drone-spotting near JFK airport have prompted U.S. Senator Chuck Schumer to revisit the issue he addressed just a few months ago, this time with an even greater emphasis on physical safety.   Schumer urged the Federal Aviation Administration and the Office of Management and Budget this week to expedite its release of new drone regulations.

In August, the Senator pushed the Commerce Department’s National Telecommunications and Information Administration to develop guidelines focused on best practices for drone usage and data collection and storage.

Last week, federal officials reported that at least three unmanned aircraft systems, a.k.a. UAS or drones, entered JFK airspace and came extremely close to commercial flights, frightening both passengers and pilots. One pilot reported seeing a drone at approximately 3,000 feet. The most alarming sighting was by a Delta pilot en route from San Diego, who spotted a drone dangerously close to the plane’s left wing.

There have been other close calls in New York City.  Last May, a pilot flying into LaGuardia spotted a drone at 5,500 feet.  In July, a drone almost collided with an NYPD helicopter over the George Washington Bridge.  In many cases, UAS are too small and cannot be clearly identified on a plane’s radar.

The Federal Aviation Administration mandates that Class B airspace (areas surrounding the nation’s busiest airports) is restricted from surface to 10,000 ft mean sea level.  Model drones, i.e. those used by private individuals or hobbyists without Special Airworthiness Certificates, are expected to be kept below 400 feet, in sight of their operators, and away from airports and traffic.

While the law is clear that the FAA may take action against model aircraft operators who operate their aircraft “in a manner endangering the safety of the national airspace system,” it prevents the FAA from promulgating rules for model aircraft that meet the following criteria: flown strictly for recreational use; operated within a community-based set of safety guidelines; weighs 55 pounds or less; not interfere with manned aircraft; and, the operator receives permission from the airport if flown within five miles of it.  There have been concerns, however, about the distinction between commercial and hobby drones.  Schumer is pushing for clarity.

UAS range from palm-sized to Global Hawks, which are nearly 45 feet long.  Technological improvements have led private companies and individuals to purchase drones for as little as $500.

Traditionally, drones were used in the military to aid in operations overseas, allowing information to be obtained without putting civilians in danger.  While hobbyists may consider them toys, drones have many commercial applications that make them useful in terms of law enforcement, disaster relief, filmmaking, sports cinematography, real estate sales, search and rescue missions, and agricultural development.  Schumer supports the use of drones under all of these categories, but said that there must be clear limits to their usage when privacy and safety are threatened.

In the FAA Modernization and Reform Act of 2012, Congress said the FAA should come up with a plan for safe integration of drones by September 2015.  A recent inspector general’s report suggests the FAA may not meet its deadline; hence, Senator Schumer has asked OMB to expedite the release of regulations to the end of this year.