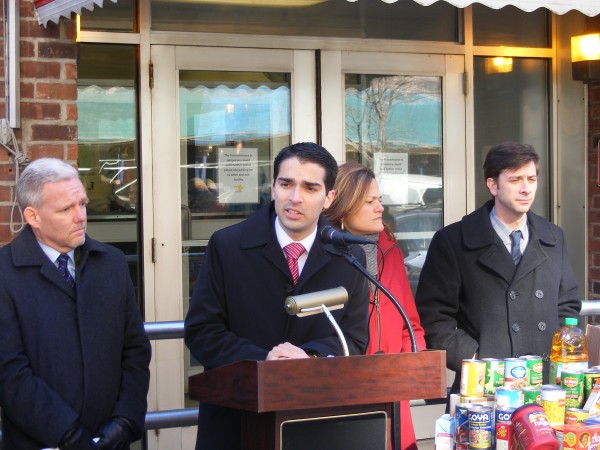 A food drive spearheaded by an area elected official has collected 3,000 pounds of nonperishable donations for city veterans.

The City Council Food Drive Initiative, held in partnership with the Food Bank for New York City, was sponsored by Council Speaker Melissa Mark-Viverito, and Councilmembers Steve Levin (D-Brooklyn) and Eric Ulrich (R-Ozone Park). In all, 35 councilmembers participated in the drive that was held from Nov. 10 through Nov. 20.

Ulrich first approached FBNYC with the idea over the summer. His office collected more than 1,000 pounds of canned goods, cereal, pasta, coffee, etc. and delivered them last Friday to the Borden Avenue Veterans Residence in Long Island City, where approximately 180 homeless veterans reside.

“Now more than ever, veterans who have fallen on hard times need our help,” Ulrich said. “This food drive will help feed hundreds of local veterans who might otherwise go without during the holiday season. I want to thank everyone who donated food for this worthy cause and all of my colleagues who contributed to this initiative. Today, we are one-step closer to ending veteran homelessness and hunger in our city and that is something we should all be proud of.”

According to FBNYC, approximately 70,000 city veterans currently use food pantries.

“This is an incredible demonstration of our city’s gratitude and compassion for those who selflessly served our country,” said Triada Stampas, FBNYC vice president for Research and Public Affairs. “We are proud to stand with Speaker Mark-Viverito, Councilmember Ulrich, Councilmember Levin and all the councilmembers who participated in this citywide effort—and we pledge to continue to work in partnership to create a city where food drives like this are not necessary.”

City Department of Homeless Services Commissioner Gilbert Taylor said that though veteran homelessness has declined 64 percent since 2000, it remains “a top priority in our agency.”

Levin added, “We have a social contract in this country to make sure that those who step up and answer the call of duty are taken care of when they come back to civilian life. We, as a society, have a moral obligation to do this.”

Alfred Fuenzalida, 56, a U.S. Marine Corps veteran and Borden Avenue resident, said his “objective is to get stability when it comes to housing,” and called the food drive “a good deal that could help a lot of veterans here.”